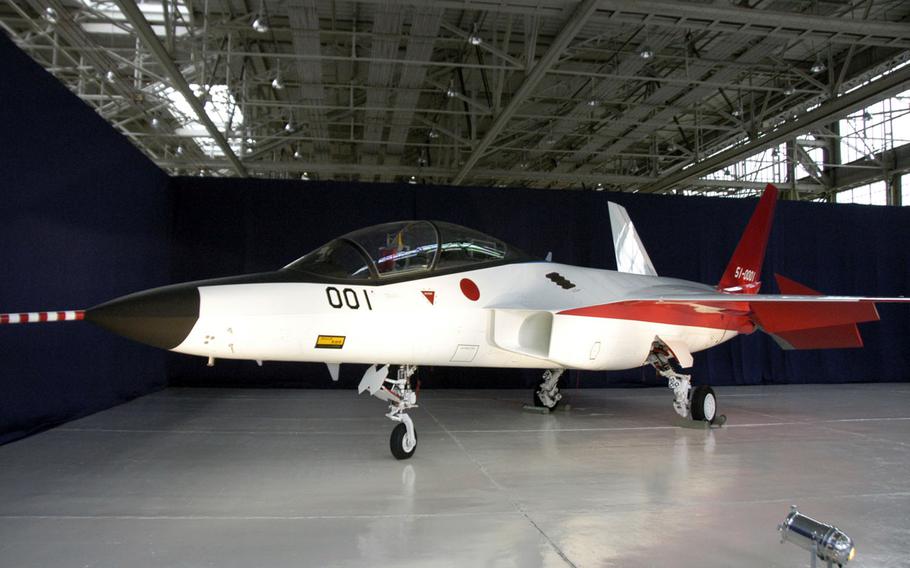 Japan’s X-2 stealth fighter, developed by Mitsubishi Heavy Industries with the help of 220 subcontractors, features a radar-evading design, stealth coating and locally made engines equipped with afterburners. A prototype flew for the first time in 2016. (Seth Robson/Stars and Stripes)

TOKYO — Japan may work with Great Britain to build a new stealth fighter, according to Japan’s Ministry of Defense.

A decision on collaboration on the high-tech project is due by year’s end, a spokesman for the ministry’s Acquisition, Technology and Logistics Agency told Stars and Stripes by phone Wednesday.

“The Tempest aircraft will deploy new, game-changing technology and is set to join the RAF fleet from 2035, replacing the Typhoon,” according to the Royal Air Force’s official website.

Japan’s X-2 stealth fighter, developed by Mitsubishi Heavy Industries with the help of 220 subcontractors, features a radar-evading design, stealth coating and locally made engines equipped with afterburners. A prototype flew for the first time in 2016.

Japanese Prime Minister Fumio Kishida and British Prime Minster Boris Johnson agreed when they met in London in May to decide what form cooperation on the new plane will take, in coordination with other allies, by year’s end, according to the Japanese official.

A joint program by the two nations to develop a fighter engine and other air combat technologies was announced by the ministry Dec. 22.

Japan has begun primary design of a new fighter to replace the Mitsubishi F-2, derived from the F-16 Fighting Falcon, which is due to be phased out from 2035, but can’t estimate how much the replacements might cost, the official said.

“We will continue with the development, so [the new fighters] can be deployed around that time,” he said.

“Cooperation with the UK is a significant step in the evolution of Japanese defense policy: doing more and doing it with more partners,” Brad Glosserman, deputy director and visiting professor at the Center for Rule-Making Strategies at Tama University in Tokyo, said in an email Wednesday.

“The two countries have been working together on various components including sensors and engines, for some time,” he said. “Building an entire jet is another matter.”