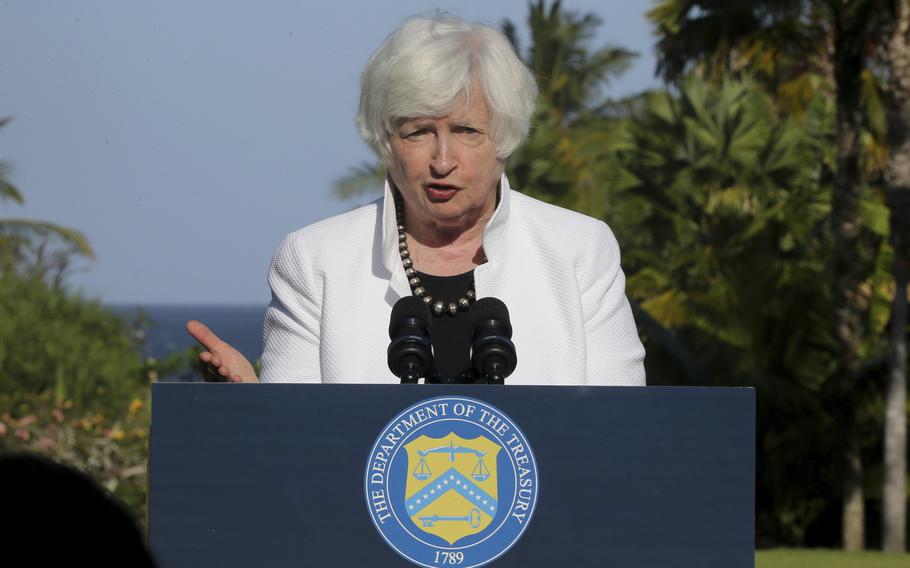 U.S. Treasury Secretary Janet Yellen speaks during a news conference in Nusa Dua, Bali, Indonesia on Thursday, July 14, 2022. Yellen and other top financial officials of the Group of 20 rich and industrial nations are gathering in the Indonesian island of Bali for meetings that begin Friday. (Firdia Lisnawati/AP)

SEOUL, South Korea — Treasury Secretary Janet Yellen said Tuesday the U.S. and South Korea should deepen their trade ties to avoid letting other countries use their market positions to unfair advantage — calling out China by name.

"We cannot allow countries like China to use their market position in key raw materials, technologies, or products to disrupt our economy or exercise unwanted geopolitical leverage," Yellen said in remarks at an LG Group-run research and development complex in Seoul.

LG, one of the biggest business groups in South Korea, in April announced plans to build a $1.4 billion battery plant in Queen Creek, Arizona.

Yellen represented the U.S. at the Group of 20 finance minister meetings on Indonesia's resort island of Bali and made stops in Tokyo and Seoul. She did not visit, but held a call with China's vice premier in charge of trade in early July.

China "has directed significant resources to seek a dominant position in the manufacturing of certain advanced technologies, including semiconductors, while employing a range of unfair trade practices to achieve this position," she said.

Citing "the unfair Chinese practices that damage our national security interests," Yellen called on countries to engage in what she called "friend-shoring," to lower economic risks for participating economies.

Friend-shoring, which Yellen has brought up in several speeches, refers to countries with shared values agreeing to trade practices that encourage manufacturing and reducing risks to supply chains.

"The purpose is to lower risks for our economy and theirs," Yellen said. "In doing so, we can help to insulate both American and Korean households from the price increases in disruptions caused by geopolitical and economic risks and facilitate our businesses access to vital inputs and products from medicine to semiconductors to electric vehicle batteries."

She also again pushed for a price cap on Russian oil exports, saying Russia is now threatening to spark a global food crisis by blocking ports in Ukraine after its invasion of the country caused energy prices to surge.

"All responsible countries must unite in opposition to this war and work together to end it swiftly," Yellen said. "And that's why the United States and other responsible allies and partners are seeking to reduce Russia's revenue to wage its war without causing a necessary volatility in global energy markets."

The global economy has been ravaged by the impacts of the war in Ukraine and shutdowns caused by COVID-19. Skyrocketing energy costs and high inflation have touched every part of the globe.

The Indo-Pacific region is seeing this play out in Sri Lanka, which is struggling through the island nation's worst economic crisis.

Later Tuesday, Yellen is to meet top South Korean officials including President Yoon Suk Yeol as she wraps up her first trip as treasury secretary to the Indo-Pacific region.