Funeral held for Japan’s Abe as successor revives his agenda 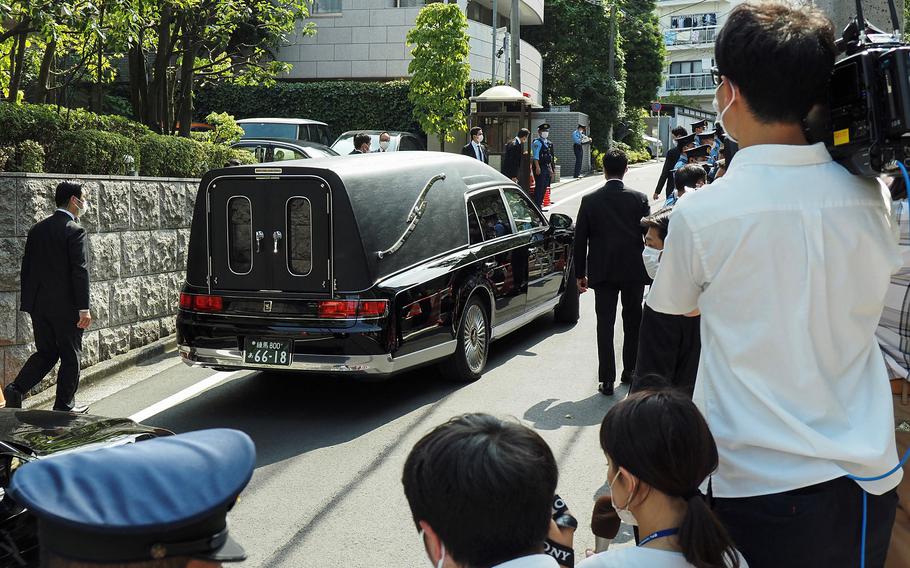 A hearse leaves the residence of former Japanese Prime Minister Shinzo Abe to transport his body to Zojoji temple in Tokyo on July 11, 2022. Abe, Japan’s longest-serving prime minister, was fatally shot during a campaign stop on July 8 in an exceedingly rare gun crime in one of the world’s safest countries. (Toshifumi Kitamura/AFP via Getty Images/TNS)

(Tribune News Service) — A private funeral is being held Tuesday for former Japanese Prime Minister Shinzo Abe, whose assassination last week shocked a nation and brought renewed attention to his key policies such as bolstering the nation’s defenses.

The funeral in Tokyo is for the family and close associates of Abe, who was fatally shot at close range last Friday as he was making an election campaign speech outside a train station in the western city of Nara. Larger-scale memorial services are to be held at a later date.

Thousands of politicians, diplomats and business leaders attended a wake for Abe on Monday night at a Buddhist temple in the capital. Mourners have also flooded places including his ruling Liberal Democratic Party’s headquarters in Tokyo and the spot where he was gunned down, offering notes and flowers for the politician who shaped the country’s economy and its diplomatic course during his record-long run in office that ended in 2020.

“I will take up the issues that former Prime Minister Abe was passionate about, but wasn’t able to bring to fruition,” Prime Minister Fumio Kishida told a news conference Monday. That would include trying to change Japan’s pacifist constitution to clarify the legality of its military, Kishida said.

Police said the suspected gunman — a 41-year-old unemployed man from Nara who once served in the Japanese navy — blamed an unspecified religious group for his family’s financial woes after his mother became an enthusiastic member and made large donations, resulting in her bankruptcy. He targeted Abe in the belief that he had close ties with the group, and denied any political motivation, public broadcaster NHK and other media said, citing police.

The Japanese affiliate of the Family Federation for World Peace and Unification, formerly known as the Unification Church, has confirmed that the suspect’s mother was a member.

Leaders from around the world have paid tribute to Abe, who was a defining and sometimes divisive figure for Japan as the country navigated economic stagnation and China’s rise next door during his two terms, from 2006-07 and 2012-20. He was a security hawk, a fiscal dove, a defender of Japan’s alliance with the US and an advocate for maintaining the postwar global order.

U.S. Secretary of State Antony Blinken made a brief stop in Tokyo on Monday en route home from a trip to the region to deliver a letter of condolence from President Joe Biden to the Abe family. “I shared with our Japanese colleagues the sense of loss, the sense of shock that we all feel, the American people feel at this horrific tragedy,” Blinken told reporters.

Taiwanese Vice President William Lai also visited to pay his respects Monday, according to the Asahi newspaper, becoming the highest-level official from the democratically governed island since Tokyo severed formal ties with Taipei a half a century ago. Abe had been increasingly vocal about the prospect of a Chinese invasion of Taiwan since leaving office.

Kishida’s LDP scored big in an election Sunday, increasing the number of seats it holds in the upper house of parliament. More than two-thirds of upper house seats were taken by lawmakers in favor of changing Japan’s pacifist constitution, drafted under U.S. occupation at after World War II.

Abe, Kishida’s former boss, was one of the most outspoken proponents of a stronger military and of revising the constitution to add an explicit reference to Japan’s Self-Defense Forces. The idea of changing the document, which has been unchanged for more than seven decades, remains divisive among voters.

The prime minister said he would make a proposal as soon as possible on constitutional change and expects debate to kick up on the matter in the fall. There has been talk for decades of changing the constitution but successive leaders including Abe have struggled to reach a consensus.

Following the funeral, the hearse carrying Abe’s body is to be driven past the prime minister’s residence and the parliament building in a final farewell, broadcaster NNN reported.