China lays out rules for managing US engagement in Asia Pacific 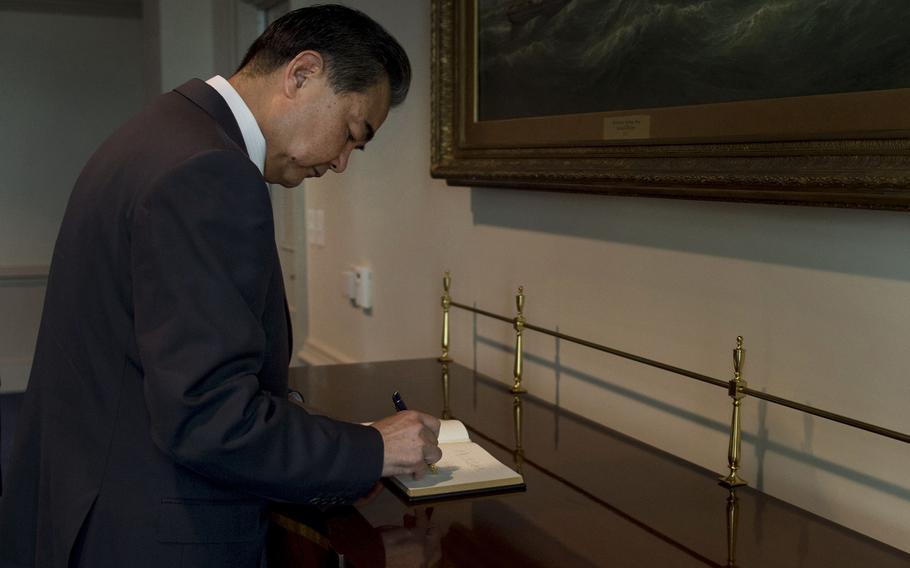 Foreign Minister of the People's Republic of China Wang Yi signs a guest book as he arrives for a meeting at the Pentagon in Arlington, Va., Oct. 1, 2014. (Adrian Cadiz/U.S Air Force)

China has handed the U.S. a blueprint for their co-existence in Asia Pacific, as the world’s two largest economies continue to clash in the region on security issues.

Chinese Foreign Minster Wang Yi said he’d made the proposal to his U.S. counterpart Antony Blinken during their five-hour meeting in Bali, Indonesia, over the weekend. Wang expanded on its details while addressing the secretariat of the Association of Southeast Asian Nations in Jakarta on Monday.

“I told the U.S. side very solemnly that our two sides should consider discussing the establishment of rules for positive interactions in APAC and jointly uphold open regionalism,” Wang said. “We look forward to feedback from the U.S. side to the Chinese proposal.”

Wang identified China’s suggested “rules” as being: Support ASEAN centrality and uphold existing regional cooperation frameworks; respect each others’ legitimate rights and interests in the Asia Pacific; and promote stability while providing “more public goods” to the region.

“If China and the U.S. can have sound interactions in APAC it could help release positive energy and also meet the expectations of all regional countries,” he added, saying achieving all this hinged on the U.S. rising above its “hegemonic mentality.”

China and the U.S. are increasingly vying for influence in the Indo-Pacific, where Beijing has territorial disputes with Washington’s allies. Chinese officials have also recently asserted the Taiwan Strait isn’t international waters, challenging Washington’s view of international law. In his speech, Wang described the question of democratically ruled Taiwan that the Communist Party considers part of its sovereign territory as “the core of China’s core interests.”

In that environment, President Biden hosted the first ASEAN leaders summit in Washington its 55-year history in May and shortly after unveiled his Indo-Pacific Economic Framework as the U.S. seeks limit China’s regional clout.

Wang is currently on an 11-day diplomatic blitz across the key strategic battleground, seeking to assuage regional suspicions of China’s intentions by emphasizing shared economic benefits. Russia’s invasion of Ukraine has stoked fears Beijing could take military action in places like Taiwan.

As well as the proposal for the U.S., over the weekend Wang issued four demands to Australia to get relations back on track. That was quickly rejected by Australia, with Prime Minister Anthony Albanese saying the nation “doesn’t respond to demands.”

Most Asian nations have sought to maintain good relations with both countries. Defense Secretary Lloyd Austin told a security forum in Singapore last month that smaller nations should be “free to choose, free to prosper and free to chart their own course.”

Wang hit on this problem, saying many countries in ASEAN were “under pressure” to take sides. “We should insulate this region from geopolitical calculations, he added, and prevent them from being “used as chess pieces in major power rivalry.”