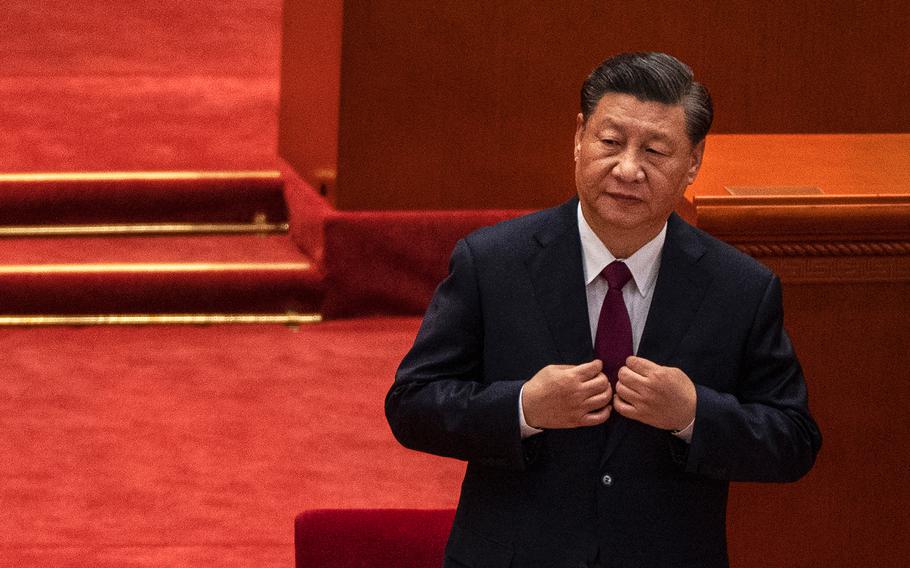 (Tribune News Service) — A year before Britain handed Hong Kong to China, then-President Jiang Zemin hailed the “one country, two systems” plan for the city as a model for the country to one day unify with Taiwan.

Taiwan would get “a high degree of autonomy” — the same pledge China used for Hong Kong — while keeping legislative and independent judicial power, and its own armed forces, according to Jiang’s speech, copies of which were distributed at Hong Kong’s handover center in 1997.

For Taiwan though, the proposal has never been an option. Even the Kuomintang — a vestige of the losing side in China’s civil war and the main force backing eventual unification with the mainland, has rejected the model. Making Xi’s task even more daunting is a drastic shift in the consensus in Taiwan against any form of integration with China, thanks to the island’s growing sense of nationhood and to the Chinese Communist Party’s sweeping crackdown on dissent in Hong Kong.

China’s handling of Hong Kong shows “all promises of autonomy and respect for local conditions will be violated,” said Steve Tsang, director of the China Institute at SOAS University of London, who has written books on Hong Kong and Taiwan. “It becomes very difficult even for advocates for greater engagement with the mainland in Taiwan itself to be able to sustain that argument.”

On July 1, China celebrated the 25th anniversary of Hong Kong’s handover, the halfway mark in the 50 years of autonomy enshrined in a treaty cementing China’s deal with Britain. The UK has said China breached commitments made under the deal, but Xi called “one country, two systems” a success and has personally endorsed it as the model under which he intends to take over Taiwan — by force, if necessary.

The dispute over Taiwan’s sovereignty is the main issue that risks one day leading to war between the US and China, with calls growing among American politicians for a commitment to get involved if Beijing invades the island. China has steadily ramped up its military pressure in recent years, regularly sending warplanes near Taiwan and warning the U.S. that the strait separating the island from Fujian province isn’t international waters.

Last November, the Communist Party affirmed the framework for “resolving the Taiwan question” in a landmark historical resolution. Xi may further articulate his goals for Taiwan during a once-in-five-year Communist Party Congress later this year, when he’s expected to secure a third term as president.

Beijing’s suppression of Hong Kong’s pro-democracy protests has underscored key differences with Taiwan, where the 2014 “Sunflower Movement” demonstrations successfully stopped legislation to closely integrate the economy with China. The island has since strengthened its image as a liberal bastion with a female leader where gay marriage is legal, just as China’s relations with the West have deteriorated over everything from its support for Russia to its treatment of the LGBTQ community and Uyghurs in Xinjiang.

There is little support in Taiwan for a political union with China, according to the Election Study Center at Taipei’s National Chengchi University. Since 1997, the percentage of the population that backs formal independence has doubled to more than 30%, while support for unification has more than halved to single digits.

“The idea that the PRC will evolve into something more free and democratic seems increasingly unlikely to a larger and larger share of the population,” said Nathan Batto, an academic who helps administer the Election Study Center poll, referring to the People’s Republic of China. “Taiwan is fiercely democratic, and the repression of Hong Kong and Xi Jinping’s concentration of power over the last decade have made it clear that limited government, much less full democracy, is fundamentally incompatible with the PRC.”

While Britain ruled much of Hong Kong under a lease that expired in 1997, Taiwan isn’t subject to any such legal arrangement. Proponents of independence say it should get to choose its own fate, arguing it was never fully ruled by the Qing dynasty, which ceded it to Japan in the nineteenth century.

“Only 25 years have passed, and what China promised in the past, ‘unchanged for 50 years,’ is no longer true,” Taiwan Premier Su Tseng-chang told reporters in Taipei on Friday. “We know that we should stick to guarding Taiwan’s sovereignty, freedom and democracy as China’s ‘one country, two systems’ can’t stand the test.”

The KMT, which has never given up its goal of unifying with the mainland since fleeing to Taiwan in 1949, has also rejected “one country, two systems.” In 1987, then-KMT President Chiang Ching-kuo suggested an alternative to China’s model for unification called “one country, better system” — whereby the people of China and Taiwan choose which system of government they prefer.

“The concept of ‘peaceful reunification and one country, two systems’ is the best approach to realizing national reunification,” Xi said in a landmark speech on Taiwan in January 2019. “It embodies the Chinese wisdom that we thrive by embracing each other, gives full account to Taiwan’s reality and is conducive to the long-term stability in Taiwan after reunification.”

The speech was seen as a major turning point in recent cross-strait relations. Xi’s clear articulation of ‘one country, two systems’ as the only path the Communist Party is willing to consider punctured any illusions that Beijing may be willing to allow unification to occur under an alternative model more acceptable to Taiwan.

Yet since Xi’s speech, Taiwan’s economy has prospered, thanks to a response to the coronavirus that avoided a full lockdown and allowed growth and exports to expand, in contrast to some of the heavy-handed curbs seen in China. Taiwan’s economic growth in 2020 outpaced China’s for the first time in 30 years.

“Freedom, democracy and opposition to ‘one country, two systems’ have become common denominators within Taiwanese society,” said Christina Lai of the Institute of Political Science at Academia Sinica in Taipei. “This consensus means we have a comparative advantage compared to Hong Kong because Beijing has never achieved unification with Taiwan. That gives the Taiwanese public a really important role at the negotiating table.”

China has ended most contacts with the island, angered by Tsai’s stance that she is willing to sit down and talk only if Beijing drops its precondition that Taiwan accept it is part of “one China.”

Concerns about the island’s fate have grown in the wake of Russia’s invasion of Ukraine. The unexpectedly strong response to Moscow’s aggression by both Ukraine and the international community will have taught Beijing to plan well and avoid being underprepared, said Tsang from SOAS.

“The reality is that Xi Jinping will try to catch Taiwan through a combination of diplomacy and intimidation, and if diplomacy backed up by intimidation cannot work, then it will do whatever it takes, even using force,” Tsang said. “How can he achieve the China dream of national rejuvenation if he does not take what he calls the ‘sacred territory of Taiwan.’”