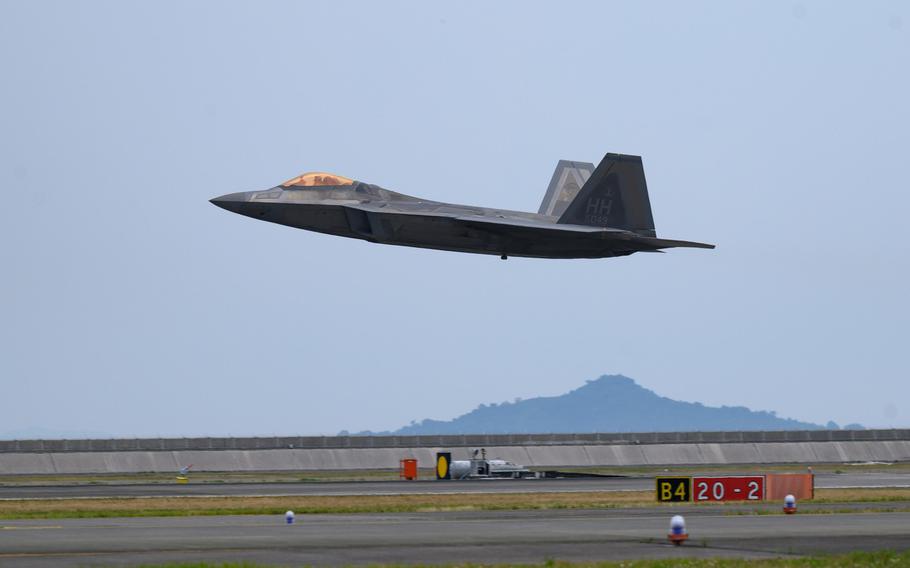 MARINE CORPS AIR STATION IWAKUNI, Japan — Visiting U.S. Air Force stealth fighters and their air combat exercises this summer more than doubled the noise complaints from the community around this air base south of Hiroshima.

The Air Force in June deployed 18 F-35A Lightning IIs from Eielson Air Force Base, Alaska, and 10 F-22 Raptors from Joint Base Pearl Harbor-Hickam, Hawaii, as part of its Agile Combat Employment training. The F-35s started flying from Marine Corps Air Station Iwakuni on June 6 and the F-22s on June 15 and both will be training until mid-July, according to a news release on the Iwakuni city website.

“Deployment of visiting aircraft is a concern since it greatly affects the lives of the residents when it is as many as this,” the city news release stated.

Complaints typically fall off in June, when the Navy’s Carrier Air Wing 5 is at sea with the aircraft carrier USS Ronald Reagan, he said. The wing is stationed at MCAS Iwakuni when the Ronald Reagan is at its homeport at Yokosuka Naval Base. 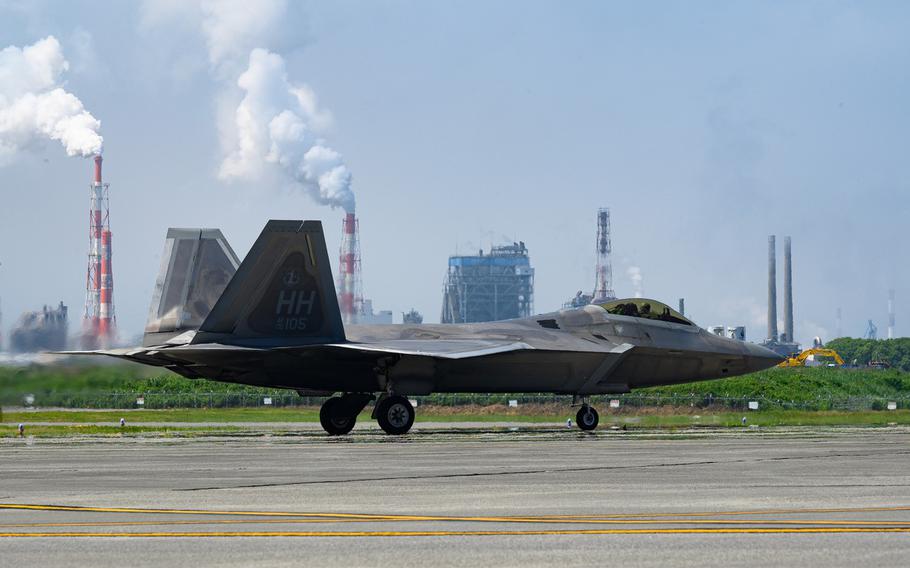 “Whether here, in the United States, or elsewhere, we do everything in our power to mitigate the impact our training has on the residents in and around our community, to include those on the base,” base spokesman Maj. Joshua Diddams told Stars and Stripes by email Tuesday.

He listed steps the base takes to mitigate the noise.

“Measures such as making every effort to honor our normal airfield hours; recognizing and avoiding flying during especially noise sensitive events near our flight operation areas; conducting straight-in full-stop measures when appropriate; and flying at higher altitudes than the lower ones that we are permitted to in order to have less noise impact, are all examples of everyday efforts we make to mitigate the impact of our training,” he said.

The city measured the loudest jet noise on June 18 at 101 decibels, Saiki said. The loudest measurement in May was 94.9 decibels and in April was 100.1 decibels, according to data on the city’s website.

The city receives complaints primarily by email and phone, Saiki said. The city counts complaints by the same person each time if they are made at different times of the day and are spread apart, he said.

In 2019 the Hiroshima High Court awarded nearly $6.8 million as compensation for aircraft noise to 653 residents living near the air base who say they suffered from the noise.

Diddams said MCAS Iwakuni tries to balance its readiness requirements with the impact its flight operations have on the community.

“Responsible stewardship is important to us,” Diddams said in his email. “We fully understand and are sensitive to the fact that our training has an impact upon our host community.”