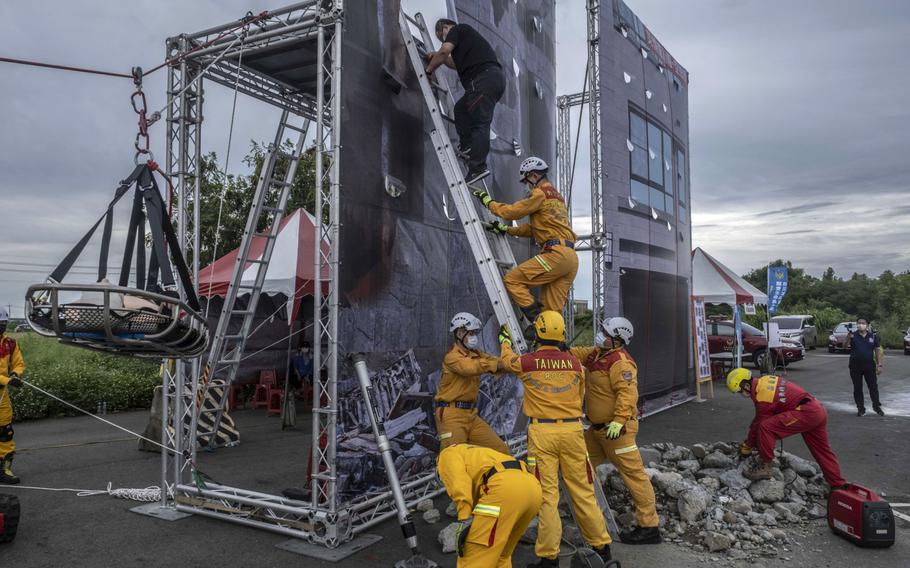 An exercise simulating a missile attack by the Chinese People’s Liberation Army in Chiayi, Taiwan, on June 9. (Lam Yik Fei/Bloomberg)

Ever since Vladimir Putin’s invasion of Ukraine, China has blamed NATO for antagonizing Russia and accused the U.S. of seeking to set up a similar alliance in the Asia-Pacific. The presence of four leaders from the region in Spain this week will only make Beijing more paranoid.

For the first time, the leaders of Japan, South Korea, Australia and New Zealand will all attend a summit of the 30-member North Atlantic Treaty Organization. At the meeting starting Tuesday in Madrid, the alliance is set to label China a “systemic challenge” in new policy guidelines for the coming decade, reflecting shifts in the geopolitical landscape as President Xi Jinping increasingly joins hands with Putin in opposition to the world’s democracies.

While the U.S. has dismissed the idea that an Asia-Pacific NATO is in the works, the Biden administration has strengthened ties with partners in the region to both push back against China’s assertiveness over disputed territory and sanction key officials over alleged human-rights abuses in places like Xinjiang and Hong Kong. Fears are also growing that Xi will look to invade Taiwan in the coming years, potentially triggering a wider war in Asia.

At a virtual BRICS summit last week attended by Putin, Xi accused the U.S. of seeking to expand military alliances and split the world economy into mutually exclusive zones. He warned that “those who obsess with a position of strength” would “only fall into a security conundrum.”

On Tuesday, Chinese Foreign Ministry spokesman Zhao Lijian said NATO had become a “tool for certain countries to uphold their hegemony.” He said China follows an independent foreign policy of peace, and called the growth of the world’s second-biggest economy “an opportunity for the world.”

“After disrupting Europe, NATO should not try to destabilize Asia and the whole world,” Zhao said.

U.S. allies and security partners in Asia aren’t convinced China’s rise is peaceful. In recent years, Beijing has increased military activity around Taiwan and become more assertive over disputed territory off its coastline from Japan to the Philippines. It has boosted security cooperation with Pacific Island states near Australia and sparked the deadliest border fight with India in decades.

Still, the Asian leaders attending the NATO summit must walk a fine line with Beijing. China remains the biggest trading partner of Japan, Australia, South Korea and New Zealand, and has used that leverage to inflict pain in geopolitical disputes.

About a decade ago, a dispute over East China Sea islands claimed by both Tokyo and Beijing led to a boycott by Chinese consumers of goods that prolonged a recession in Japan.

“It’s impossible for Japan to stand up to China by itself, either economically or militarily,” said Kyoko Hatakeyama, a professor specializing in security at the University of Niigata Prefecture. “America is backing us, but even so, it’s a bit difficult, so we must have Europe take an interest.”

China’s actions have prompted a vow from Japan under Prime Minister Fumio Kishida to upgrade its military, in a departure from the pacifism it embraced under a U.S.-drafted constitution after its defeat in World War II. That includes boosting defense spending beyond a longtime cap set at 1% of gross domestic product.

South Korea is in a similar position. President Yoon Suk Yeol, a newly elected conservative, has sought to align his country more closely with the U.S. and its allies in Europe.

Linking up with NATO “may protect South Korea’s interest against that of Beijing in case of the decline of U.S. influence in the Pacific region in the long term,” said Cheon Seong-whun, a former security strategy secretary for South Korea’s presidential office.

Australian Prime Minister Anthony Albanese, who took office last month, warned China this week to learn lessons from Russia’s “strategic failure” in Ukraine when weighing what to do with Taiwan.

The Ukraine invasion brought democratic nations together, “whether they be members of NATO, or non-members such as Australia,” Albanese said in an interview with the Australian Financial Review.

Yet while Asian countries are more interested in linking up with NATO, there’s little prospect of them joining in a similar collective defense arrangement. The US and other colonial powers once sought to form the Southeast Asia Treaty Organization as a regional NATO to fight communism, but it suffered from organizational problems and eventually disbanded in 1977.

All of the U.S. mutual defense treaties in Asia - with Japan, South Korea, the Philippines and Australia - are bilateral and have been around for decades. Southeast Asian nations in particular have no interest in picking sides, and Japan and South Korea remain at odds over disputes stemming from Japan’s past colonization of the Korean Peninsula.

Only a regional crisis like a Chinese invasion of Taiwan might prompt Asian nations to overcome their differences and form a security bloc, according to Japanese lawmaker and former vice defense minister Akihisa Nagashima.

“If China tried to unify with Taiwan by force, I don’t think other Asian countries could accept it, and they might consider creating an Asian NATO,” he said. “But at this point, no one would join. And even if it was somehow created it wouldn’t function.”