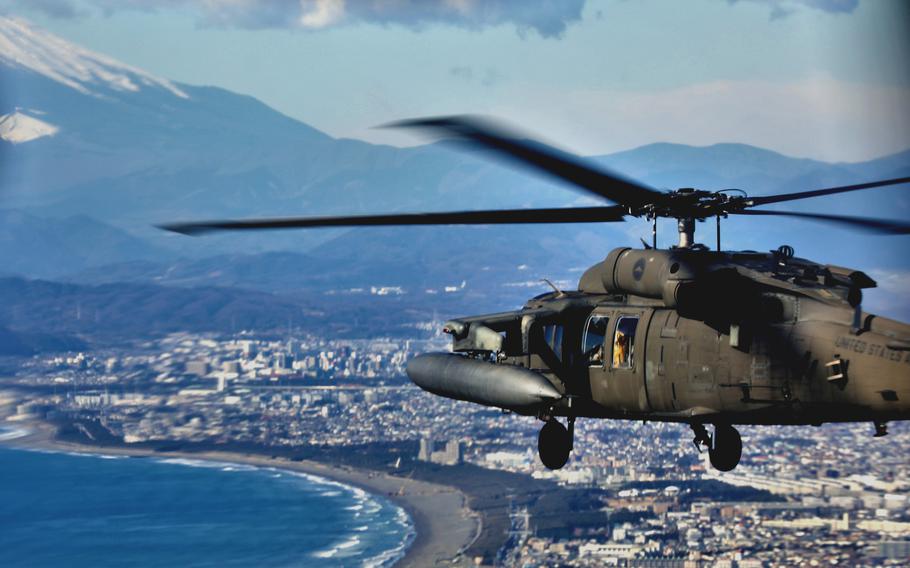 A review of U.S. military flights by U.S. authorities found none had dipped below a minimum safe altitude over central Tokyo, Japan’s Foreign Ministry told Stars and Stripes by email Friday.

The Mainchi Shimbun on June 21 reported that U.S. helicopters are flying below safe altitudes prescribed in Japanese and international aviation law. However, Japan’s minimum altitude rule does not apply to U.S. military helicopters under a special law based on the status of forces agreement that governs the relationship between Japan and the U.S. military, according to The Mainchi.

The newspaper reported that it has video recordings of U.S. Black Hawk helicopters passing 650 feet above Shinjuku Station in the heart of Tokyo since February 2021. The minimum safe altitude is about 1,000 feet over buildings, according to the newspaper.

The ministry statement did not explain why it asked U.S. Forces Japan for a report on low-altitude flights.

USFJ told the ministry that it found no record of flights that violated military flight rules, which are consistent with Japanese and the International Civil Aviation Organization regulations, according to the ministry statement.

Air Force Maj. Tom Barger, a USFJ spokesman, did not respond to a request for comment June 22 from Stars and Stripes.

According to the ministry statement, USFJ “explained that ensuring safety is the top priority when conducting flights.”

The ministry declined to provide details of its exchanges with USFJ or with whom the ministry had spoken, according to its statement Friday.

However, the Japanese government, after receiving the USFJ report, again “strongly requested” that it thoroughly ensure safety when conducting flights, according to the ministry statement.

“We think that ensuring utmost safety is extremely important for U.S. military operations including flight training,” according to the ministry. “We will continue to work with the U.S. as ensuring safety when conducting flights is the top priority.”