As China shuts out the world, internet access from abroad gets harder, too 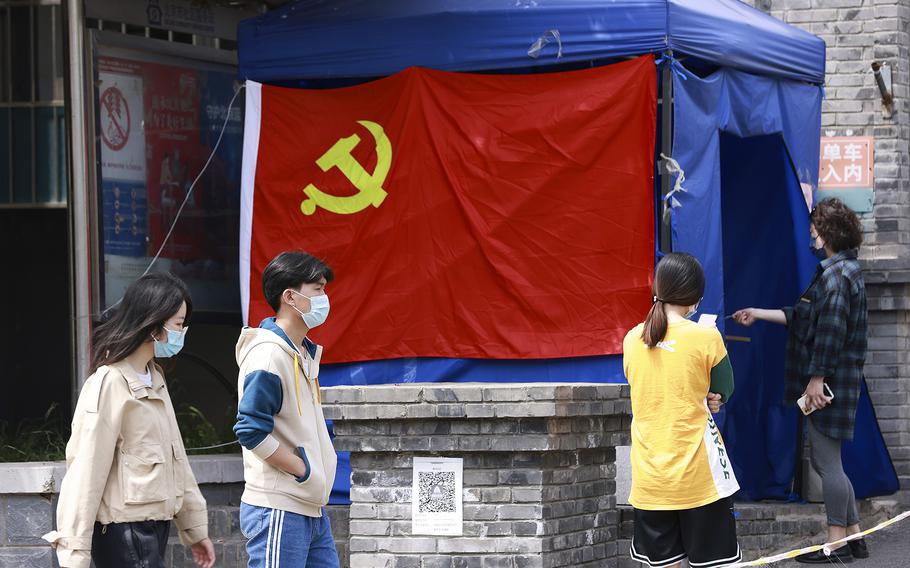 People wait in line for a swab test at a COVID-19 test site on May 19, 2022, in Beijing as China is trying to contain a spike in coronavirus cases in the capital. (Lintao Zhang, Getty Images/TNS)

(Tribune News Service) — Most internet users trying to get past China’s Great Firewall search for a cyber tunnel that will take them outside censorship restrictions to the wider web. But Vincent Brussee is looking for a way in, so he can better glimpse what life is like under the Communist Party.

An analyst with the Mercator Institute for China Studies in Berlin, Brussee frequently scours the Chinese internet for data. His main focus is information that will help him understand China’s burgeoning social credit system. But in the last few years, he’s noticed that his usual sources have become more unreliable and access tougher to gain.

Some government websites fail to load, appearing to block users from specific geographic locations. Other platforms require a Chinese phone number tied to official identification. Files that were available three years ago have started to disappear as Brussee and many like him, including academics and journalists, are finding it increasingly frustrating to penetrate China’s cyber world from the outside.

“It’s making it more difficult to simply understand where China is headed,” Brussee said. “A lot of the work we are doing is digging for little scraps of information.”

One of the most sweeping surveillance states in the world, China has all but closed its borders since the start of the pandemic, accelerating a political turn inward as nationalism is on the rise and foreign ties are treated with suspicion. A harsh zero-COVID policy has contributed to the attrition of foreign residents, particularly after a long and bitter lockdown this spring in Shanghai, China’s largest and most international city.

At the same time, academics and researchers have complained that the digital window into China seems to be constricting too. That compounds a growing concern for China experts locked out of the country amid deteriorating relations with the West. A tightening of internet access means observers will struggle to decipher what internal pressures China’s leader Xi Jinping may be facing and how to keep track of Beijing’s diplomatic, technological and military ambitions.

Comprehensive analysis on whom China’s Great Firewall keeps out is scarce; much of the focus on the country’s internet freedom remains on domestic censorship. But many researchers who have experienced such challenges suspect that their limited access is part of China’s attempt to ward off what it sees as international meddling, and present its own tightly controlled narrative to the outside world.

Several researchers, for example, noted difficulties accessing Xinjiang government data from abroad, likely a response to international criticism on reports of forced labor and human rights abuses against the western region’s Uyghur population. More puzzling to Brussee was when he encountered similar barriers to the government website of Anhui province, a decidedly less controversial part of China.

Brussee said websites have also added guards against data scraping, limiting how much information he can retrieve via automation on public procurement of surveillance systems, policy documents and citizens or businesses affected by the social credit system. Some bot tests known as CAPTCHA require manual input of Chinese characters or idioms, another barrier for those unfamiliar with the language.

China is keen to project an image of power and superiority. But that has been undermined at times by embarrassing revelations, including recent videos of Shanghai residents protesting harsh lockdown restrictions. The posts were quickly wiped from the Chinese web but continued to circulate beyond the Great Firewall, challenging Beijing’s claims that its zero-tolerance COVID policy was better at containing the pandemic than programs in the West.

In order to squeeze through bottlenecks, Brussee uses a virtual private network, or VPN, which routes an internet user’s web traffic through servers in a different geographic location. Though it’s a commonly used tool for Chinese netizens to circumvent the Great Firewall, Brussee’s aim is to appear to be visiting websites from within China’s borders.

But VPNs aren’t foolproof. Chinese authorities have cracked down, making connections in and out of China slow and erratic. Brussee said he went a month without a VPN last fall, when his main provider inexplicably stopped functioning. After five fruitless calls to the company, he could only wait for service to eventually resume. His last resort would be to use a Chinese company with more reliable servers inside the country, but he said installing Chinese software comes with additional security risks.

“I don’t think the VPN is enough anymore a lot of the time,” said Daria Impiombato, a researcher at the Australian Strategic Policy Institute who uses VPNs to bounce around to different locations when trying to visit Chinese government websites. “You find workarounds, but it takes way longer.”

One alternative source of information that Impiombato has relied on is WeChat, the ubiquitous social messaging app owned by Chinese gaming giant Tencent. Many party agencies have their own pages on WeChat where they post notices, but it requires a lot of mobile scrolling to find the relevant material, she said.

Signing up for an account, however, has become more challenging for foreigners in recent years as Chinese platforms like WeChat, Weibo and others have implemented additional screening, such as a Chinese phone number and official identification. In some cases, those registration requirements can be more prohibitive than geoblocking, ruling out resources from online discussions to official documents to industry databases.

Graham Webster, editor in chief of the DigiChina Project at the Stanford University Cyber Policy Center, has searched for a way to use Weibo since losing his Chinese phone and subsequently his account. The closest solution he could find was a service that provided temporary, and he suspected fraudulent, phone numbers.

“We are talking about something that would be on the internet for one-fifth of the world’s population and not for the other four-fifths,” Webster said. “This is one more wedge in a steepening curve of barriers between China and the outside world. It leaves a lot more ground for suspicion and uncertainty.”

Blocking foreign internet users, particularly from sensitive information, is not unique to China. According to a 2020 report from Censored Planet, which studies internet freedom and censorship, the U.S. government had blocked about 50 websites from being viewed from Hong Kong and mainland China, including official military home pages and stores of economic data.

But China’s control of information appears more expansive. The government, according to researchers and academics, had made files and data available online over the last decade. But in recent years — as China has become more sensitive about its global image and more critical of the West — that degree of openness has run into a trend to deter outsiders from peering in.

“It’s the effort of openness coming up against the current push towards closedness,” said Maya Wang, senior China researcher at Human Rights Watch. “The result is some strange hybrid landscape, where you can have access to a lot of information if you go through all these hoops, specifically because they are not designed for you to have access to them.”

Some who have developed ways to bypass blocks were reluctant to share details, aside from generally trying to emulate a Chinese location, fearing those channels would be plugged as well.

“Describing to a newspaper the workarounds to access blocked Chinese sites ensures that the workarounds will be blocked, too,” one U.S. academic researcher wrote via email. “The only thing I can add, without cutting short my own career, is another common sense measure, namely, scrape and cache whatever one discovers the first time around.”

That’s turned into standard practice for Impiombato, who has grown paranoid about saving her own copies of everything as government web pages, news releases and social media posts have vanished unexpectedly amid her research.

“Sometimes you see the perfect piece of information that you need and then suddenly it’s gone, she said. “You almost have to start from scratch every single time.”

Katherine Kaup, a professor at Furman University who studies China’s ethnic policy, said the country’s changes have forced her and others to consider entirely new research topics and techniques. She has reservations about one day returning to China for field work, and even virtual discussions with people in the country have been dampened by concerns over repercussions for speaking too frankly amid a growing clampdown on dissent.

“I sometimes feel like I’m in a bad sci-fi movie,” she said. “The type of research that we used to do is not going to be possible moving forward in the next few years.”