CAMP HANSEN, Okinawa – A little more than a year after the ordeal, a Marine first lieutenant was decorated for helping save a man from drowning after a sailing mishap off the Okinawa shore.

Ladine, of the 9th Engineer Support Battalion, was walking along the beach near Onna village on May 15, 2021, when he spotted an overturned outrigger sailing canoe just offshore, he told Stars and Stripes on Tuesday.

“I thought for a second, they might be OK, then I said, 'You can’t just flip a sailboat back over easily, so I put on my fins and goggles and swam out to them,” he said.

A sudden gust of wind had flipped the 21-foot-long sailboat, tossing its two occupants, driving the mast into the sea bottom and trapping Tom Burkard’s right leg between the mast and the hull. Burkard’s sailing buddy, Marine Lt. Col. Caleb Eames, surfaced clear of the boat.

“I came up out of the water, got my bearings, I looked around and I didn't see Tom,” Eames told Stars and Stripes by phone Monday. "I swam around to the other side – still didn't see him. Then I started to get concerned. Then I spotted Burkard's body underneath the hull." 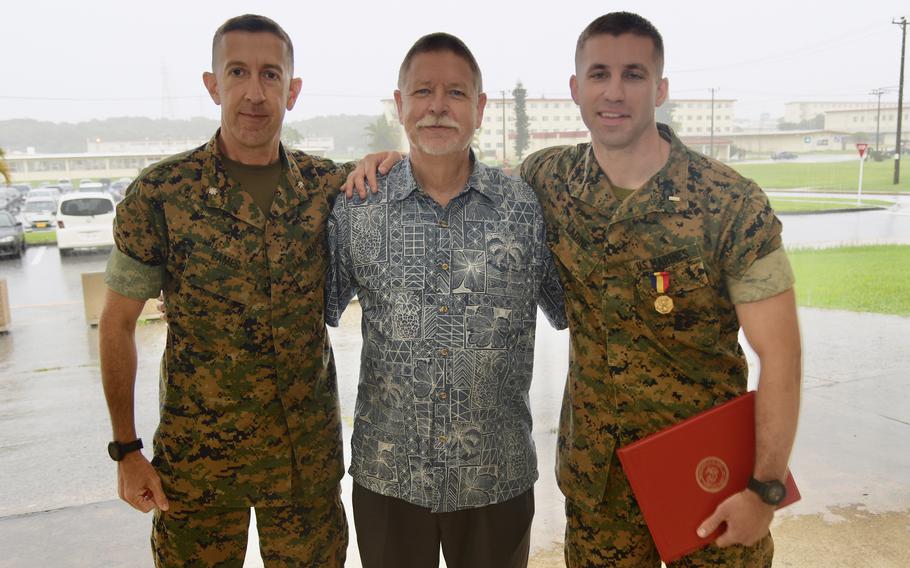 Eames grabbed Burkard's chin and pulled him to the surface but could only get his nose and mouth above the waterline, Eames said.

“He came up yelling pretty good, and he said, ‘My leg is stuck!” Eames said.

Eames, 45, originally of Fredericksburg, Va., said he worked to free Burkard, but the boat weighed flat on the collapsed mast, holding Burkard fast.

“I was giving up hope when I heard a voice say, ‘Hey you guys need help?’” Eames said.

Burkard was celebrating his 63rd birthday that day and said he thought it could be his last.

“When Ladine showed up and he was 10 to 15 feet away from me, his head popped out of the water, and I was just like, oh, lord Jesus thank you,” Burkard told Stars and Stripes by phone Monday.

The two Marines devised a strategy: Eames leaned on the upside-down keel while Ladine went underwater and pulled Burkard away from the mast. Burkard was free within 10 minutes. “Although many past awards were for heroism involving lifesaving, the [medal] is not solely a lifesaving medal,” the manual states. “However, for acts of lifesaving, or attempted lifesaving, the action must have been performed at the risk of one’s own life.

Eames and Burkard were present Tuesday to see Ladine decorated.

Burkard, now 64 and a Christian missionary who builds outriggers as a hobby, said he’s been sailing for 50 years and will continue to do so. The three men have been boating together since their shared ordeal.

Eames, a public affairs officer with the 3rd Marine Expeditionary Brigade at Camp Courtney, put in the paperwork to recognize Ladine for his efforts that day.

“If he had not shown up, Tom and I would not be here today,” Eames said. “He saved our lives, certainly Tom's life. I was not going to let my friend go under the water without me doing my absolute most to get him out and that would have likely taken my life.”