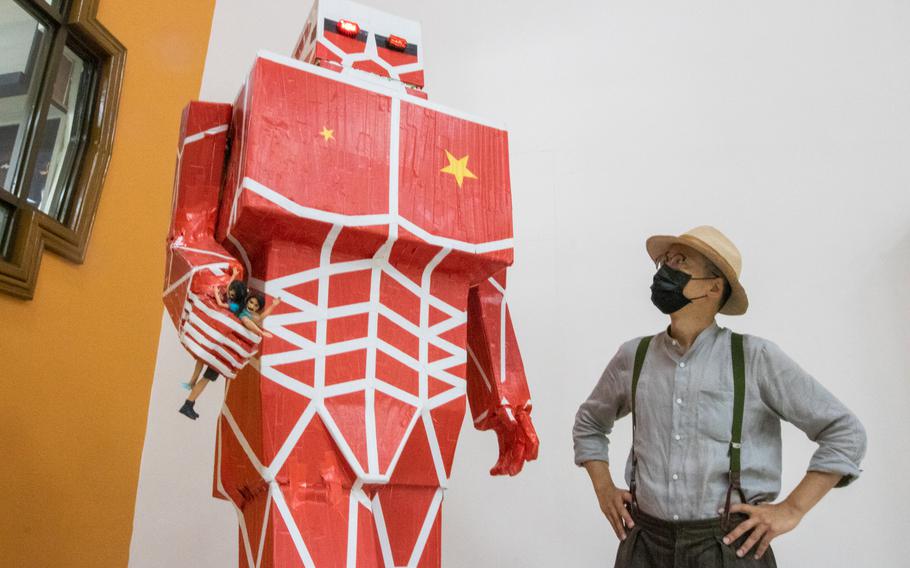 TAIPEI, Taiwan — At an exhibit hall in central Taipei, artists set up sculptures, churches held live-streamed prayer sessions, and activists read poems at a vigil near the president’s office, while participants dressed in black held small electric candles and observed 64 seconds of silence.

On the 33rd anniversary of the crushing of pro-democracy demonstrations in Beijing’s Tiananmen Square on June 4, 1989, Taiwan has emerged as one of the last places in the Chinese-speaking world remembering the deaths of thousands at the hands of the Chinese Communist Party, after authorities banned such demonstrations in Hong Kong.

“Taiwan has become very important. It has become the only place in the Chinese-speaking world where June 4th can be openly remembered,” said Wu Renhua, a former protester in Tiananmen, speaking from a stage in Taipei’s Liberty Square. “Preserving history is also a form of resistance,” he said.

For more than three decades, activists held an annual candlelight vigil in Hong Kong’s Victoria Park to remember the incident also known simply as June 4th. Under a sweeping national security law imposed by Beijing, the vigil - now a broader symbol of political expression in the city - has been banned. Hong Kong authorities, barring any assembly “to express certain views” in or near the park, warned citizens last week not to “test the boundaries.”

In Taipei, this year’s events are centered on Hong Kong, which has become a cautionary tale for Taiwan as Beijing ramps up threats to take over the self-governed democratic island it claims as its own.

The exhibit, titled “Rather than die in silence, live in resistance,” includes art inspired by objects from the Hong Kong protests, such as molotov cocktails and gas masks, photos of street protests in 2019 and films about the movement. The exhibit includes a restored version of the Pillar of Shame, a 26-foot sculpture depicting victims of the massacre. It was removed by Hong Kong authorities in December after being displayed at Hong Kong University for almost 25 years.

In Taipei and Tainan in the south of Taiwan, groups are hosting screenings of a play about an elderly couple in Beijing whose son was killed in the protests. The play ends with a rendition of the protest song, “Glory to Hong Kong.” A church in Tamsui, north of Taipei, whose congregants are mostly from Hong Kong live-streamed a prayer session in commemoration of those who died.

“It’s a responsibility we cannot relinquish,” said Tseng Chien-yuan, president of New School for Democracy, which organized this year’s vigil in Taipei. “This is a war on memory. Our duty is to make people remember this incident.”

For Tseng, it is important that Taiwan picks up the baton to commemorate June 4, because remembering Tiananmen is a way to support democracy and protect human rights in the region. The art exhibit includes references to Taiwan’s authoritarian past during martial law and Myanmar’s military takeover.

“Over the past 33 years, the meaning of June 4 is expanding,” he said. “This means the regime that cracked down on its people is getting stronger, and we face more difficulties defending democracy.”

In Taiwan - where student protests broke out a year after the Tiananmen crackdown and marked a key turning point in Taiwan’s democratization - June 4 has traditionally not aroused as much public sympathy as in Hong Kong. Small-scale events have been held for years, garnering little attention compared to the vigil in Hong Kong.

But as more Hong Kong activists and dissidents retreat to Taiwan amid arrests and expanding repression in the city, the anniversary has taken on new significance.

“Taiwan and Hong Kong share a similar fate that connects us because we’re facing the same enemy,” said Kacey Wong, a dissident artist from Hong Kong who is participating in the June 4 art exhibit in Taipei. “It’s like a reserve base.”

Wong created a cardboard sculpture based on a Japanese manga series about monster-like giants who feed on humans. “I’m using it as a metaphor that mainland China is coming into Hong Kong and eating people. Of course, now it’s coming for Taiwan after it ate up Hong Kong,” said Wong, who moved to Taiwan in July 2021.

Former student protesters say that whether Taiwan truly takes up the mantle for remembering Tiananmen depends on Taiwanese residents, many of whom see themselves as disconnected from China or Hong Kong and their struggles for democracy.

In March, when Tseng’s organization launched a fundraising campaign to restore the Pillar of Shame and display it permanently in Taipei, online backlash was swift. Critics said the events of Tiananmen have nothing to do with Taiwan, emphasizing that Taiwan is not part of China despite Beijing’s repeated claims.

“Some people say that Chinese matters have nothing to do with the Taiwanese,” Tseng said.

Taiwanese President Tsai Ing-wen said in a statement Saturday on Facebook: “We believe such brute force cannot erase people’s memories. When democracy is under threat . . . it is more necessary to uphold democratic values.”

In Hong Kong, police patrolled Victoria Park, where the annual vigil was held, having blocked off parts of it since late Friday. Still residents found ways to remember, by walking past the park in black T-shirts or displaying a picture of a candle on their phones.

Some students appeared to have gathered 3D-printed miniature figurines of the Goddess of Democracy - a symbol of the 1989 Beijing protests that was removed in December - and planted them around the Chinese University of Hong Kong’s campus.

On Saturday evening, a man dressed in black sat on a bench alone outside the park. Disclosing only his surname out of security concerns, Tseng said he has joined the June 4 vigil since 1989.

“I cannot forget,” he said. “I am just sitting on a bench with nothing in my hands. If Hong Kong doesn’t have freedom like this, there will be nothing left.”

Chiu Yan-loy, a former member of the now-disbanded Hong Kong Alliance, which once organized the June 4 vigil, said the key is to continue to remember it in different ways. “Although we cannot remember publicly, no one can stop us from privately remembering victims who sacrificed for democracy,” he said.

On Saturday, about 2,000 demonstrators gathered in the heat of an early summer evening in Taipei’s Liberty Square. Activists, dressed in black and wearing gas masks and hard hats - the unofficial uniform of the Hong Kong protests - erected a miniature version of the Pillar of Shame sculpture. From the crowd, participants yelled, “Glory to Hong Kong.”

Liao Yiwu - a prominent Chinese dissident writer who was jailed for four years after publishing his poem “Massacre” in 1990 - attended the vigil. “What happened in Hong Kong was miserable,” said Liao, who was in Taiwan for a writing project. At the vigil in Taipei, he recited a new poem, “The Second Massacre,” dedicated to the Hong Kong protesters.

Jonni, 19, a Hong Konger who moved to Taiwan last year and who gave only his first name out of security concerns, said he hoped Taiwan would pay more attention to China’s threat to its democracy.

“June 4th is a warning,” he said, watching the events from the back of the crowd. “Do not be too complacent. The threat Taiwan faces is even bigger.”

The Washington Post’s Lily Kuo in Taipei and Theodora Yu in Hong Kong contributed to this report.