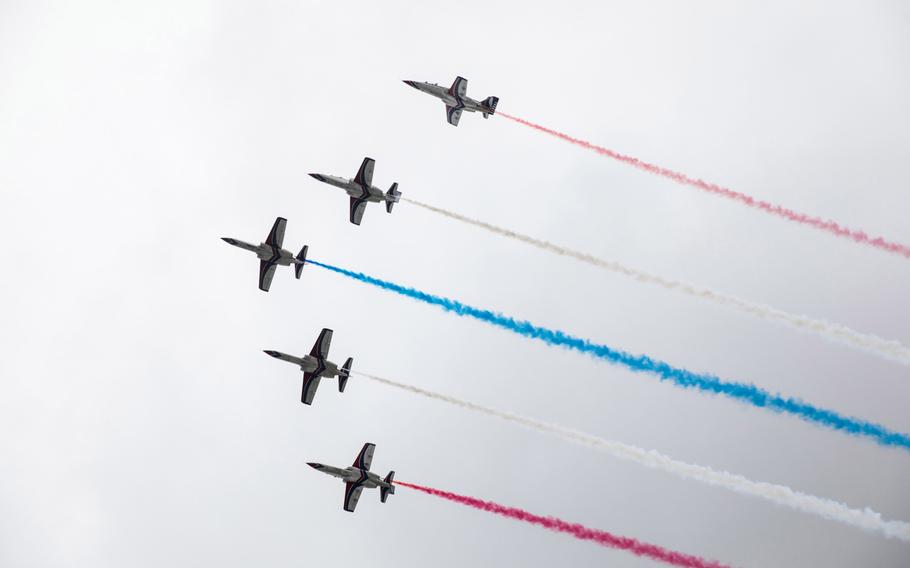 A Taiwanese air force trainer jet crashed, killing its pilot, hours after scores of Chinese warplanes flew close to the island, highlighting concerns about its aging military fleet as Beijing intensifies its pressure on Taipei.

The domestically built AT-3 aircraft went down Tuesday about 8 a.m., minutes after taking off from the southern port city of Kaohsiung during a training mission, according to Taiwan’s Ministry of National Defense. The weather was clear and the pilot, 23, had 116 flying hours.

The air force halted all academy training flights as President Tsai Ing-wen ordered an investigation of the cause of the incident, her office said via text message.

The crash fuels mounting worries about the reliability of the older aircraft in Taiwan’s aging military fleet at a time of near-daily Chinese incursions into the island’s air defense identification zone. Thirty People’s Liberation Army aircraft flew into the zone on Monday, Taiwan’s Defense Ministry said on its website, close to the highest number this year. Taiwan reported 39 PLA aircraft in the southwest portion of its air defense identification zone on Jan. 23.

The Chinese Communist Party now led by President Xi Jinping has threatened to invade Taiwan for more than seven decades and considers the democratically ruled island part of its territory that must be brought under its control. Taiwan’s government rejects the claim, asserting Taiwan is already a de facto sovereign nation.

The crash is the latest in a series of accidents to befall Taiwan’s military. In March, a Mirage 2000 fighter jet reported a mechanical failure shortly after takeoff on a routine training mission in eastern Taiwan and then crashed. The pilot was found alive after he managed to eject. In January, an F-16V disappeared during a training exercise over the Taiwan Strait, with rescuers later finding its debris.

The AT-3 model from Tuesday’s crash has been in service for over three decades after being developing by Taiwan’s Aerospace Industrial Development Corp. in collaboration with Northrop. One last crashed in 2015 during a training exercise, killing both the instructor pilot and a student on board, according to the Defense Ministry.

Tuesday’s incident came as U.S. Sen. Tammy Duckworth, D-Ill., leads a three-day trip to Taiwan as part of a larger trip to the Indo-Pacific region. She was scheduled to meet with senior leaders to discuss U.S.-Taiwan relations, regional security, trade and investment, and global supply chains, according to a statement from the American Institute in Taiwan, the de facto U.S. embassy in Taiwan.

Duckworth’s visit comes a week after President Joe Biden sowed confusion over the U.S. stance on Taiwan by saying at a briefing in Tokyo that Washington would intervene militarily in the event of a Chinese invasion. Those comments went beyond the long-held U.S. policy of “strategic ambiguity” whereby Washington has committed to helping Taiwan defend itself without guaranteeing its forces would be part of any hostilities.

Duckworth said during a meeting with Tsai on Tuesday morning that she was in Taipei to reiterate the U.S. stance that Taiwan “will not stand alone.”

“While I want to emphasize our support for Taiwan’s security, I do want to say that it’s more than just about the military. It’s also about the economy,” she said. “And I’m here to support President Biden’s efforts in engaging in a closer economic relationship and closer relationships between our two nations on an economic front as well as on national security.”

China lodged a diplomatic complaint with the United States over Duckworth’s visit, Foreign Ministry spokesman Zhao Lijian said Tuesday at a regular press briefing in Beijing. “We have taken note of the wrong signals by the U.S. side on the Taiwan question,” he added.