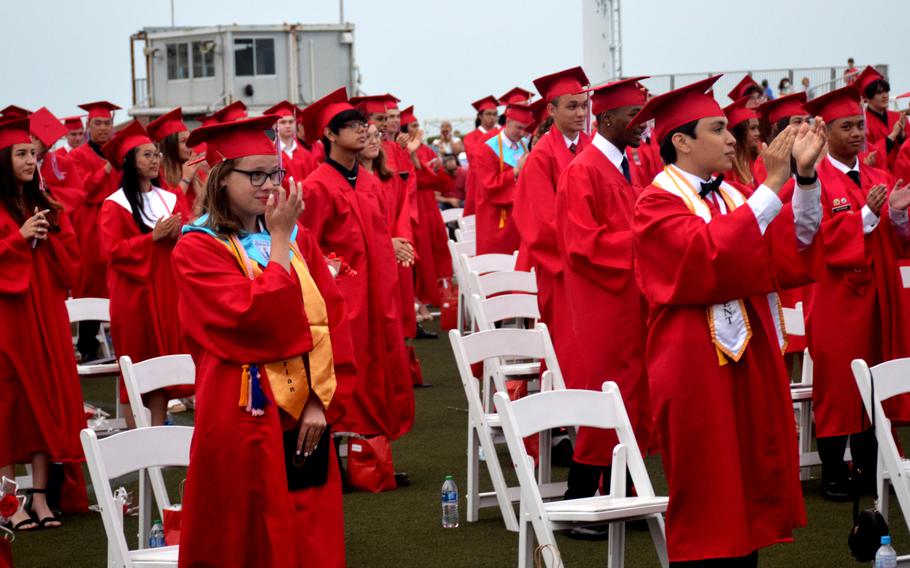 YOKOSUKA NAVAL BASE, Japan – More than 100 high school students accepted their diplomas at Yokosuka’s Berkey Field on Thursday, a scene that’s set to repeat throughout the Indo-Pacific over the next week.

Department of Defense Education Activity-Pacific high schools began their graduations on May 25. When caps are tossed into the air in Okinawa on Saturday, 845 students will have graduated from a dozen schools in Japan, South Korea and Guam.

“I have every confidence that somewhere in the not-too-distant-future that students at Kinnick High School will be speaking your names along with the likes of other student graduates,” he said.

Maxey also referenced the students’ challenges with coronavirus restrictions, calling their high school years “anything but typical,” but said they persevered, nonetheless.

Unlike the past two years, when graduations and other events had to adapt to COVID-19, this year’s ceremony was held without any visible restrictions. While every commencement is a special occasion for the students and their families, this year also marks DODEA’s 75th year sending graduates into the world.

“This year we celebrate 75 years of educational support to military-connected families – empowered by the resourcefulness, dedication and focused optimism of the men and women who established and operated schools in the aftermath of World War II,” DODEA spokeswoman Miranda Ferguson told Stars and Stripes in an email Wednesday.

Military bases provided schools for dependent children before DODEA came into being. Its foundations were laid after World War II when the Army in 1946 established the Dependent Schools Service in the occupied countries of Japan, Germany and Austria, according to DODEA’s website.

By the end of its first year, nearly 3,000 students were enrolled in dependent schools.

After three years, the Army, Navy and Air Force separately operated nearly 100 schools. In 1976, those systems began to consolidate under a single governing body – the Office of Overseas Dependents Education – before ultimately transforming into DODEA.

Today, DODEA is responsible for the education of approximately 67,000 students across 160 schools in four continents, according to its website.

“There has been much change over the history of DODEA; however, one thing remains constant — students are at the core of everything we do,” Ferguson wrote. “Our DODEA students and graduates all share the unique understanding of life and learning as a military-connected child, an experience that bonds our earliest students with those who fill our classrooms today.”