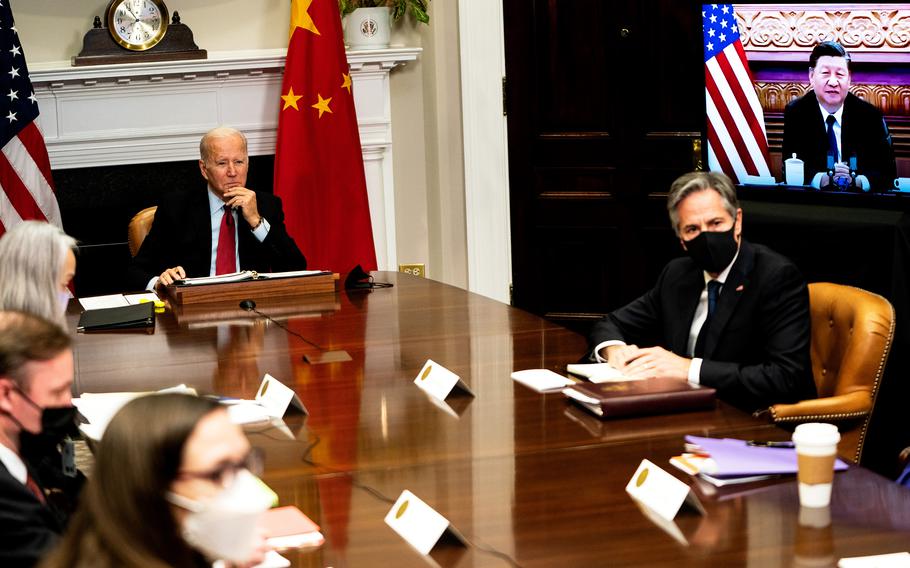 WASHINGTON - The United States must remain focused on the economic and military threat posed by China despite the challenges presented by Russia and other top adversaries, Secretary of State Antony Blinken said Thursday in a widely anticipated address on U.S.-China policy.

The Biden administration has long singled-out China as the “biggest geopolitical test of the 21st century,” but Russia’s three-month war in Ukraine has consumed the White House’s time and attention as the death toll climbs and the fighting sends energy prices and inflation soaring.

In Blinken’s address, the culmination of months of internal deliberations over how to approach Beijing, he emphasized that China, unlike Russia, is the only country powerful enough to challenge U.S. dominance on the world stage.

“Even as President Putin’s war continues, we will remain focused on the most serious long-term challenge to the international order - and that’s posed by the People’s Republic of China,” Blinken said. “China is the only country with both the intent to reshape the international order, and increasingly the economic, diplomatic, military and technological power to do it.”

Blinken said allowing China to dominate the 21st century given its lack of respect for human rights “would move us away from the universal values that have sustained so much of the world’s progress over the past 75 years.”

He specifically called out the country’s human rights practices in Tibet, Hong Kong and Xinjiang, where he accused Beijing of carrying out “genocide” against Uyghurs and other ethnic minorities.

On a range of humanitarian, economic and security issues, Blinken said the United States was “more aligned with partners across the Indo-Pacific” than ever before.

From the George W. Bush administration onward, American presidents have sought to reorient U.S. foreign and defense policy toward Asia, home to many of the world’s fastest-growing economies. But geopolitical events in Europe and the Middle East have presented myriad distractions.

U.S. officials say President Joe Biden is bent on preventing that cycle from continuing into his presidency.

“Since the onset of this crisis in Ukraine, the president has been determined not to allow it to undercut our efforts elsewhere,” said a senior administration official who spoke on the condition of anonymity per rules set by the administration before the speech. “In fact, he wanted to make sure our response to Putin left us and our allies and partners in a stronger position to stand up to the challenge to peace and stability in the Indo-Pacific and around the world.”

Blinken’s speech at George Washington University was originally intended to be delivered before Biden’s first trip to Asia last week, but it was postponed after the secretary of state tested positive for the coronavirus.

During the president’s trip, he announced the outline of a new trade framework that is meant to counter China’s growing influence and strengthen the United States’ economic ties with Indo-Pacific nations including Australia, Brunei, India, Indonesia, Japan, South Korea, Malaysia and other countries that account for 40% of global gross domestic product.

On his visit to Japan, Biden infuriated Beijing when he told a reporter “yes” when asked if the United States would intervene “militarily” should China attack Taiwan - remarks that contradicted Washington’s decades-long policy of “strategic ambiguity” that avoided extending an explicit security guarantee to the island.

Blinken clarified in his speech that U.S. policy “has not changed.”

“We oppose any unilateral changes to the status quo from either side. We do not support Taiwan independence, and we expect cross-strait differences to be resolved by peaceful means,” Blinken said.

China considers Taiwan part of its territory and has threatened to retake the island by force if necessary. Since the United States established diplomatic relations with China in 1979, Washington has gradually provided an increasing supply of military equipment to Taipei while refraining from explicitly telegraphing what it would do in the event China tried to retake the island.

Beijing is likely to repudiate Blinken’s use of the word “genocide” in describing the country’s campaign of mass detention and sterilization of Uyghur and other ethnic minorities. Blinken attempted to soften his condemnations by saying that the United States raises these issues “not to stand against China but to stand up for peace, security and human dignity.”

Blinken’s speech also laid out the three key pillars of the Biden administration’s China policy: investing in American competitiveness and innovation, aligning U.S. efforts with partners and allies, and competing with Beijing to defend American interests.

His first pillar - investing in U.S. education and technology - requires bipartisan support in Congress, which has been difficult for Biden to generate outside of legislation supporting Ukraine against Russia’s invasion. Blinken argued that the United States risked losing out to China and other countries in the absence of significant government spending.

“We used to rank first in the world in R&D as a proportion of our GDP. Now we’re ninth,” Blinken said. “Meanwhile, China has risen from eighth place to second.”

He said the administration hoped to work with lawmakers to make “historic investments in research and innovation, including in fields like artificial intelligence, biotechnology, quantum computing,” though getting new legislation through Congress will be easier said than done.

“These are areas that Beijing is determined to lead, but given America’s advantages, the competition is ours to lose,” he said.