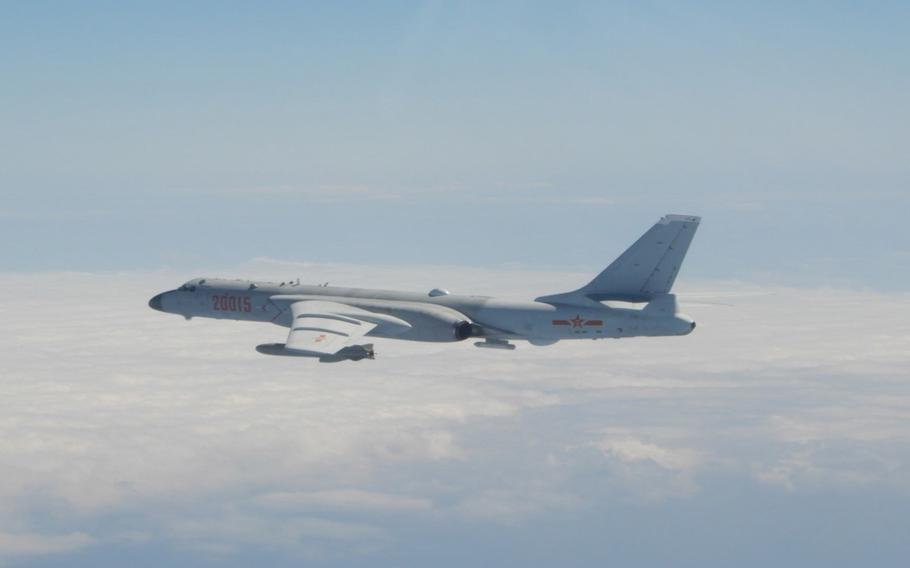 Among the Chinese aircraft flying over the southwest corner of Taiwan’s ADIZ were four J-11 fighter jets and five J-16 strike fighters, according to a news release posted Friday by Taiwan’s Ministry of Defense.

The formation included three H-6 bombers, a Y-8 transport plane and a KJ-500, which is an airborne radar tracking system, the ministry said.

It is not unusual for China to fly military aircraft through Taiwan’s ADIZ, airspace beyond a nation’s territorial boundary over which it maintains air traffic control for the sake of national security.

China has been encroaching on the airspace with greater frequency over the past year.

China regards Taiwan as a breakaway province and maintains that it must be unified with the mainland, by force if necessary.

Biden’s visit to Asia, the first of his presidency, is an effort by the administration to show that it still has an eye on the Indo-Pacific — and China and North Korea — even as it has focused most of its attention this spring on supporting Ukraine.

Biden then heads to Tokyo, where he will meet with leaders of Japan, India and Australia, an informal grouping dubbed the Quad.

The members of that security pact cooperate on security, economic and health issues, but in the past few years its emphasis has been countering China’s growing ambitions of regional hegemony, particularly Beijing’s claims over Taiwan and a huge swath of the South China Sea.

The United States formally switched diplomatic recognition from Taipei to Beijing in 1979. America has continued to supply military arms to Taiwan in the years since but has remained ambiguous about what the U.S. military would do in the event China moved militarily against the island.

“We have a commitment” to defend Taiwan if it were attacked by China, Biden said during a CNN “town hall” meeting in October. The comment incensed Chinese officials.

Defense and State department officials walked back the remark, saying that the U.S. had not officially altered its Taiwan policy. But a growing chorus of lawmakers and retired military officials now advocate more forthright support for the island.

“The people of Taiwan share our universal values, so I think the U.S. should firmly abandon its ambiguity,” he said.