In a massive Chinese sinkhole, scientists find a secret forest 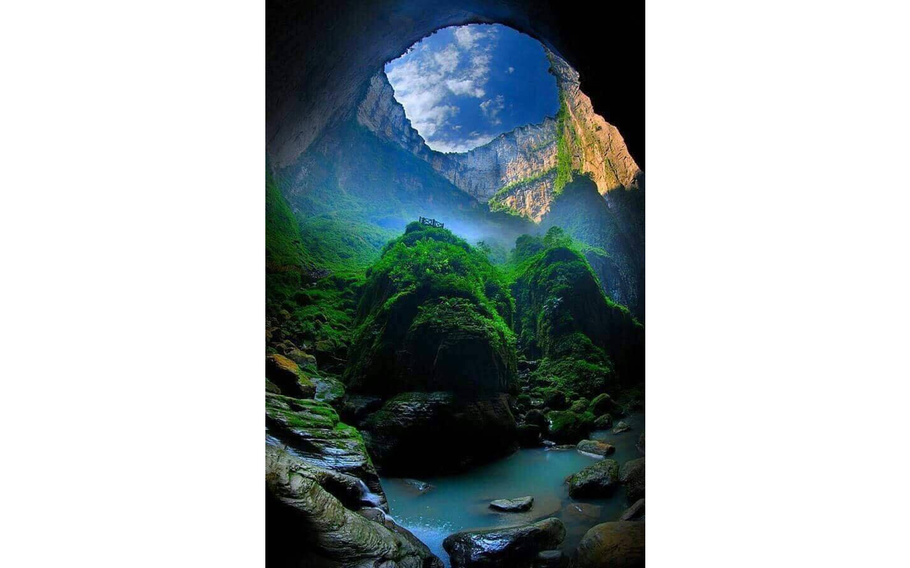 Cave explorers discovered the hidden forest this month when they descended into a previously unexplored massive sinkhole in south China’s Guangxi region. (Facebook)

At the bottom of a sinkhole, ancient trees stretch nearly 130 feet high. Dense plants cover the ground, and a rare type of bamboo grows.

Cave explorers discovered the hidden forest this month when they descended into a previously unexplored massive sinkhole in south China’s Guangxi region. Researchers say the hole, which is roughly 630 feet deep and spans more than 176 million cubic feet, could be home to previously unidentified plant and animal species.

“It’s not unusual to have trees growing out of cave entrances,” said Veni, who was not involved in the new research. “It’s just that this [sinkhole] is particularly large and particularly deep, so it’s not the sort of thing that most people would expect.”

Giant sinkholes are common in this part of China, a UNESCO World Heritage site. They are a feature of some karst landscapes and form when groundwater dissolves bedrock, causing the ceiling of a cave chamber to collapse. Large sinkholes are known in Chinese as “tiankeng,” or “heavenly pits.”

The sinkhole near Ping’e village is known to local residents as Shenying Tiankeng, or “the bottomless pit.” From a distance, the cliff looks like a pair of soaring wings, the Guangxi Daily newspaper reported.

The researchers arrived at the sinkhole May 6 and saw dense trees blocking the bottom of the pit, the newspaper reported. They used drones to explore the area and then rappelled and hiked to the bottom for several hours, passing dense thorns and fig plants. They found three caves in the wall that may have formed early in the sinkhole’s evolution, Zhang Yuanhai, senior engineer at the Institute of Karst Geology of China Geological Survey, told Chinese state-run news agency Xinhua.

While trees exist in other sinkholes, Veni said they can only grow if the hole is shallow enough and has a big enough opening to let in sunlight. The newly explored sinkhole is almost definitely home to small animals, such as insects, that are currently unknown to scientists, he said.

The sinkhole is the 30th to be found in China’s Leye County. Video shared by CGTN, a Chinese state-run TV news channel, shows the explorers climbing through dense plants and documenting their findings. Comparing their new research to other sinkholes may help them better understand karst landscapes, the channel reported.