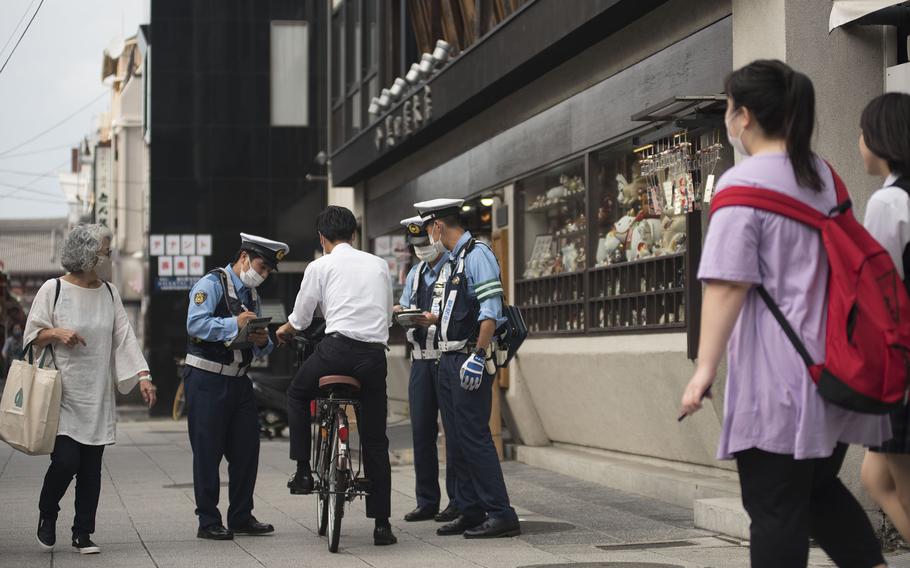 An advisory from Japan’s National Police Agency said officers should avoid questioning people in a manner that may be perceived as racial profiling. (Akifumi Ishikawa/Stars and Stripes)

TOKYO — Police in Japan have been advised to avoid questioning people in a manner that may be perceived as racial profiling.

The advisory came in December from Japan’s National Police Agency to police in the nation’s 47 prefectures, according to a report Thursday by Kyodo News.

The agency’s advisory said police officers should not base their decisions to question someone based on their appearance or how they dress, Kyodo reported.

The advisory follows reports across legacy and social media of Japanese police questioning people based solely on their foreign backgrounds. The U.S. Embassy, for one, said in a Dec. 6 tweet it had received “reports of foreigners stopped and searched by Japanese police in suspected racial profiling incidents.”

The tweet said that some subjects were detained, questioned and searched. The embassy advised U.S. citizens to carry proof of immigration and request consular notification if detained.

In response, Chief Cabinet Secretary Hirokazu Matsuno defended police practices. Questioning is conducted in accordance with the law when officers believe there is a rational reason, such as unusual behavior, to suspect someone has committed a crime or are about to commit a crime, he said at a Dec. 6 news conference.

“It is not something conducted based on a decision made because of other reasons, such as race or nationality,” he said.

However, more than half those surveyed by the Tokyo Bar Association in March said they they believed they’d been questioned by police because they are foreigners.

The U.N. Committee on the Elimination of Racial Discrimination repeatedly expressed concern about the use of racial profiling by law enforcement officials worldwide and in December 2020 recommended an end to the practice.