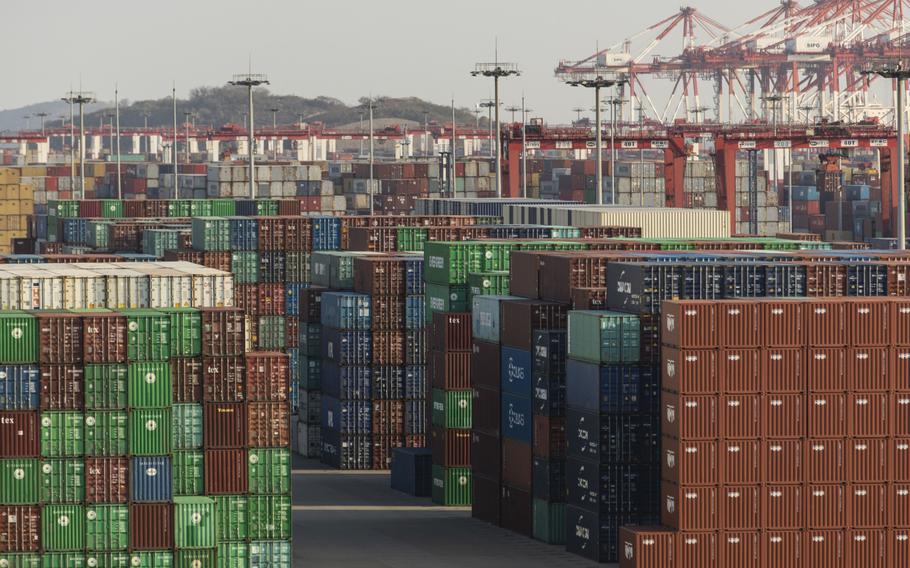 Gantry cranes and shipping containers at the Yangshan Deepwater Port in Shanghai on Jan. 11. (Qilai Shen/Bloomberg)

The global lithium industry needs as much as $42 billion of investment by the end of the decade in order to meet demand for the crucial battery-making material, with attempts to build supply chains outside of China subject to much higher costs, according to a data and market-intelligence provider.

The sector will require $7 billion of investment each year from now until 2028, Benchmark Mineral Intelligence said in a report. That would help it meet forecast demand of 2.4 million tons a year by 2030, which is four times higher than the 600,000 tons that's estimated to be produced in 2022.

The forecast comes as Europe and North America look to reduce their dependency on Chinese imports and develop their own lithium production. That strategy that could require around twice as much capital than relying on getting the refined product from the Asian powerhouse, Benchmark said.

China has enjoyed a stranglehold over the lithium supply chain, bolstered by economic clustering, a high level of expertise, and lower labor and energy costs.

"If you want lithium with as little ESG impact as possible, the solution may cost more outside China," analyst Cameron Perks said in the report.

In the U.S., the Biden administration has been pushing to accelerate production of key battery metals, with more than $3 billion in grants to help process elements including lithium. Meanwhile, Canada has also earmarked up to $2.9 billion (CA $3.8 billion) in this year's budget to build a domestic critical metals supply chain.

Lithium, which is central to the clean-energy transition, has surged more than 400% in China over the past year, as supply struggles to keep pace with the electric-vehicle boom. Tesla CEO Elon Musk has made a public appeal for more investment in lithium mining, and said that the car giant might consider mining or refining it directly after prices rose to "insane levels".

The shortfall of raw materials to produce batteries is limiting the production of EVs, meaning their makers may have to get involved in mining if they want to make the cars at scale, Benchmark's chief executive officer, Simon Moores, said in the report. While lithium's major producers have large investments planned, those alone will not be sufficient and new mines are needed, the note added.

Automakers could step in and "they have more than one reason to do so," according to Perks. "Unlike investors, they are not just looking for a return from profits generated by lithium. They are looking to secure supply for their batteries."