Young Okinawans are optimistic, but feel weight of US military presence on their island 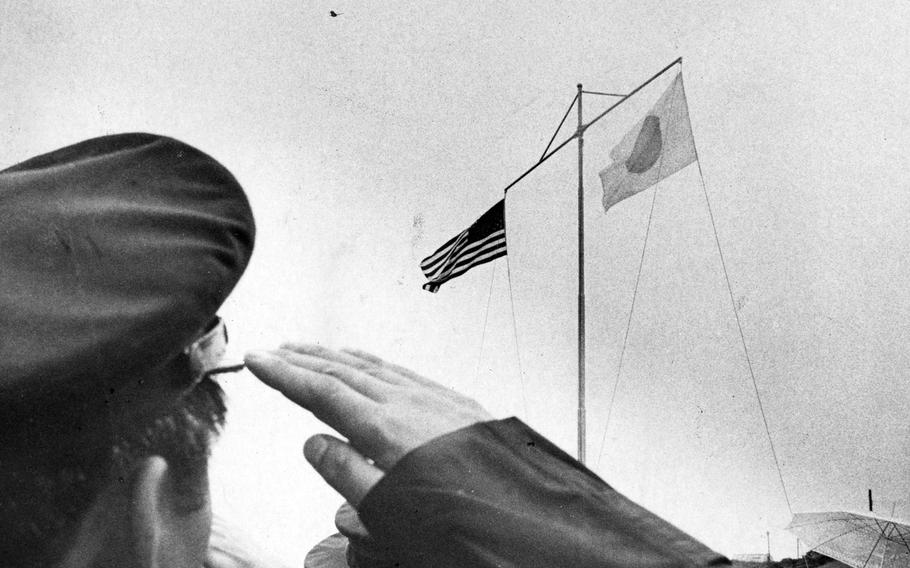 A Japanese soldier salutes as U.S. and Japanese flags fly side-by-side on Okinawa, May 15, 1972, the day Okinawa reverted to Japan, ending 27 years of American rule. (Stars and Stripes)

CAMP FOSTER, Okinawa – Fifty years after Japan regained dominion over Okinawa, the island prefecture’s young people are more accustomed than their parents and grandparents to the U.S. military presence on the island.

Yet the mammoth U.S. footprint on Okinawa continues to grate on many locals, particularly those who lived through World War II and the subsequent American rule that ended May 15, 1972.

“The older generation experienced the war and that is why they have different opinions from young people,” Momoko Tsubaki, 22, of Ginowan city, told Stars and Stripes on March 9 while strolling a shopping mall in Kitanakagusuku. “But for us, U.S. military bases were already here when we were born. I have a friend who is a member of a military family.”

The U.S. post-war legacy in Japan survives nowhere like it does on Okinawa, where tens of thousands of American troops, their military machines and their culture still command attention. Okinawans have long questioned their share of the cost of Tokyo’s alliance with Washington. 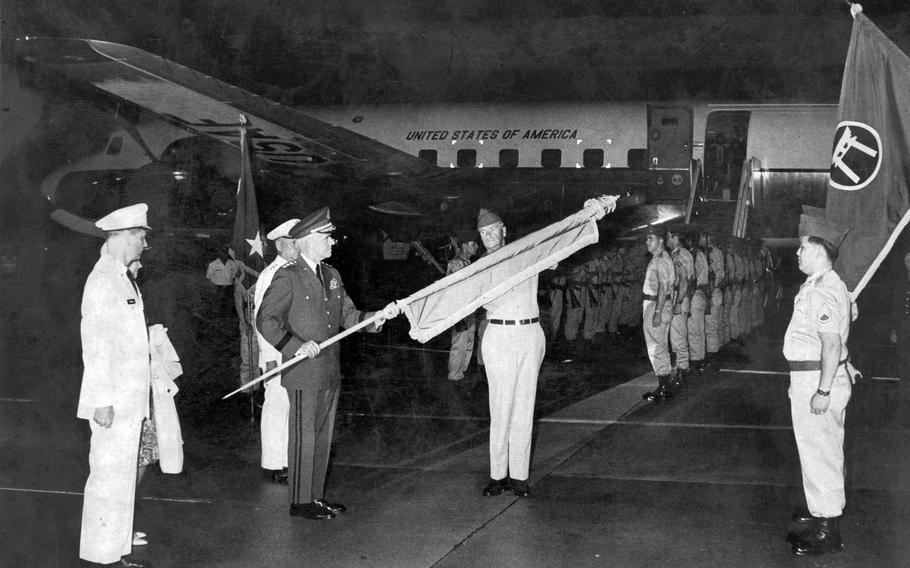 Army Lt. Gen. James Lampert, the last U.S. high commissioner in Okinawa, is presented with the flag of the high commissioner of the Ryukyu Islands, a post he held since 1969, just before boarding a flight to Tokyo, May 15, 1972. The general left Okinawa 16 minutes after the reversion of Okinawa took effect, returning the prefecture to Japan after 27 years of U.S. rule. (Stars and Stripes)

According to a poll by Japanese sociologists in 2017, young people on Okinawa, ages 18 to 34, agree with the older generation that the prefecture shoulders a disproportionate burden of American bases, just over 65%, versus nearly 74% for ages 65 and up, Wako University sociology associate professor Yukihiro Yoneda told Stars and Stripes during an interview April 15.

Even then, the younger generation tends to choose softer language like “somewhat agree,” Yoneda said. The poll data was released in April.

“Younger people tend to choose moderate answers such as ‘somewhat agree,’ ‘somewhat disagree,’ or ‘neither agree nor disagree,’” he said. “Compared to the older generation, there is a decrease in strong feelings or views toward U.S. bases.”

An April poll of 1,500 Okinawans ages 18 and older by Kyodo News found that locals would prefer a downsized U.S. presence. Most, 84%, believe Okinawa bears a disproportionate share of the U.S. military burden, according to Kyodo on April 24. While 76% “expressed affinity” for the U.S., 51% said they don’t trust the U.S. military, according to the report.

Okinawa, roughly the same area as Tokyo and with a population of 1.4 million, is home to about 30,000 U.S. service members and another 50,000 civilian employees and family members, according to information from the 1st Marine Aircraft Wing and U.S. Forces Japan.

The U.S. has 32 installations, including one it shares with the Japan Self-Defense Forces, that occupy about 18% of the island, according to Okinawa prefecture. They range from Kadena Air Base, a vital Western Pacific airlift and fighter base, to Camp Schwab, home to Marine rapid responders, the 4th Marine Regiment and 3rd Reconnaissance Battalion.

Junsei Yabiku, 19, of Ginowan, a math major at University of the Ryukyus, told Stars and Stripes that he is used to the American presence, but Okinawa bears more than its share.

“Japan is still forcing 70% of the U.S. military bases onto Okinawa,” he said on campus April 15. “It is still questionable if Okinawa is part of the U.S. or Japan.” 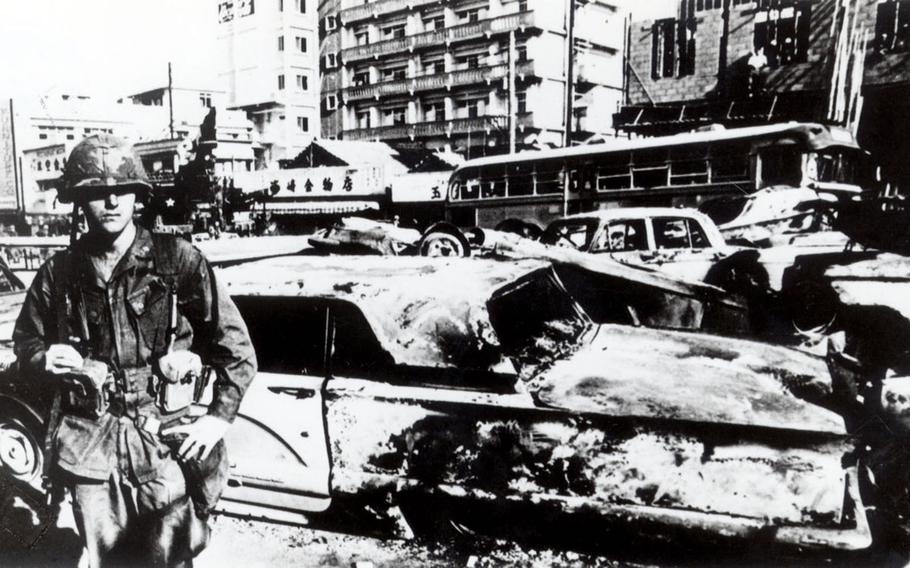 A American service member stands in front of a burned car in Koza, now known as Okinawa city, after the Koza Riot of Dec 20, 1970. (Naha Museum of History) 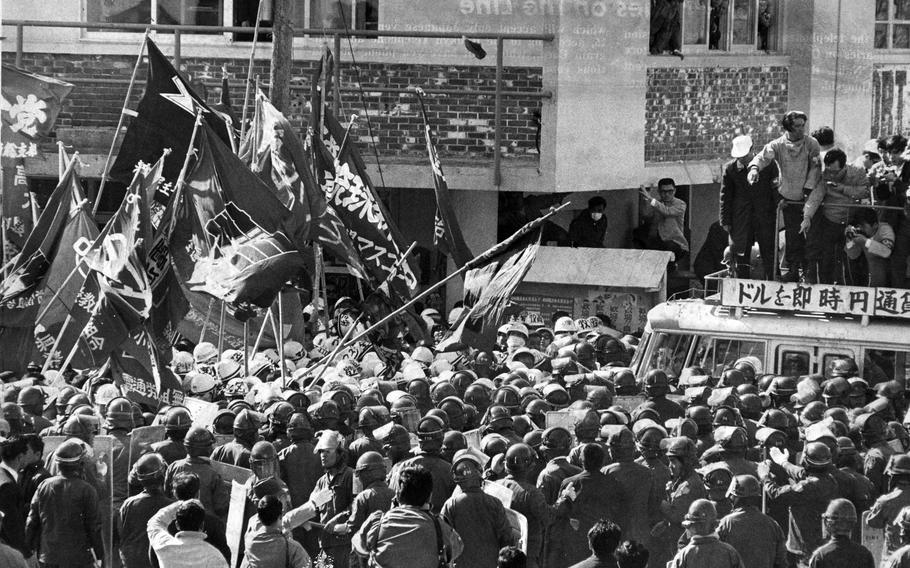 About 1,000 Okinawan riot police form a shield around 162 Japan Ground Self-Defense Force cadets in Naha, Okinawa, Feb, 29, 1972. The arrival of the cadets for a tour and study of the Battle of Okinawa sparked a demonstration by nearly 700 people. (Stars and Stripes)

Hard fighting during the 1945 Battle of Okinawa, the last major ground battle of World War II, claimed the lives of 14,000 Americans, 110,000 Japanese troops and at least 140,000 Okinawa civilians.

The U.S. under the 1951 San Francisco Peace Treaty with Japan kept control of Okinawa until the Nixon administration agreed in 1971 to return it. The handover, or “reversion,” took place May 15, 1972.

Under its administration, the U.S. restricted free speech and union activities on Okinawa and seized property to make way for military bases, Michihiro Akiyama, associate professor of sociology at Okinawa International University, told Stars and Stripes on March 3. 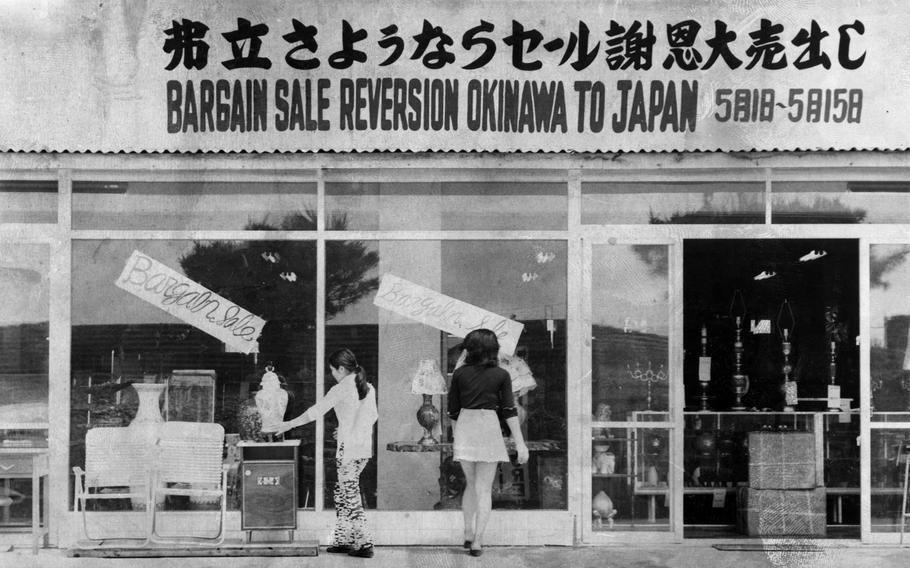 A sign above a furniture store in Naha, Okinawa, announces, "Bargain Sale Reversion Okinawa to Japan," May 13, 1972. (Stars and Stripes)

Meanwhile, crimes perpetrated by U.S. service members often went unpunished, and reminded Okinawans that the military presence presented a threat to their lives, Akiyama said. Crimes and aircraft mishaps colored the older generation’s attitudes and fed the protest movement that still exists on the island.

Okinawans do not share a monolithic attitude toward the U.S. presence. The Americans promoted democracy, founded banks and schools and fostered a revival of Okinawan, or Ryukyu, culture, said Toshiaki Arashiro, a visiting professor of history and education at Okinawa University.

“However, people’s expectations were betrayed,” he told Stars and Stripes on Feb. 28. “Americans were friendly and nice, but in inconvenient situations, American interests were prioritized. It was an American-first democracy.”

Momentum built for a return to Japanese authority that reached its peak in the 1960s, Arashiro said. At the time, Okinawans pressed for “complete reversion,” meaning the removal of all U.S. bases. Lacking that, the return to Japan for older Okinawans is unfulfilled, he said.

Ordinary Okinawans still see their own wellbeing as secondary to U.S. interests, which contributes to lingering ill-will.

“The feeling that the military bases threaten people’s lives and existence and the memories from the war are part of the reason why protest against the bases still continues,” Akiyama said. 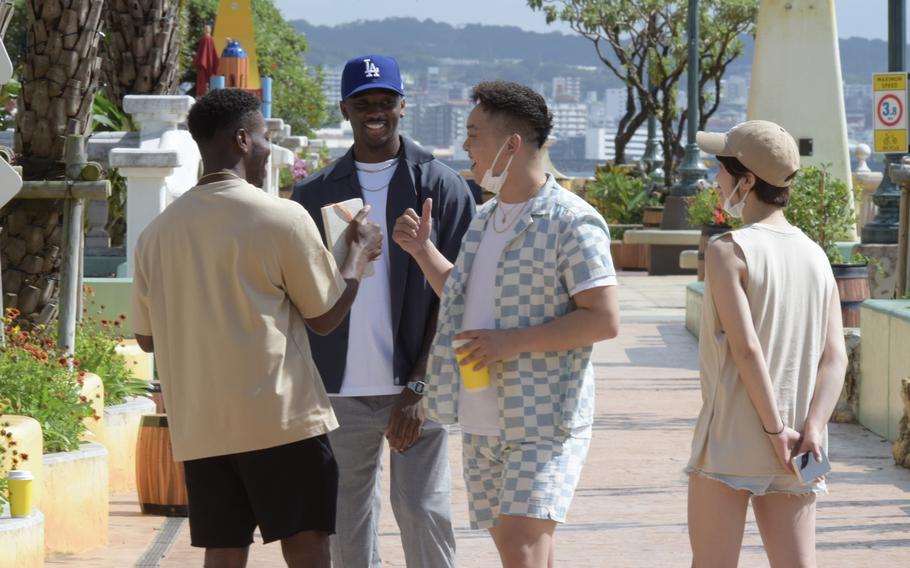 People hang out in American Village, an American-themed outdoor mall in Chatan, Okinawa, Thursday, May 12, 2022.  (Frank Andrews/Stars and Stripes)

Tamaki would rather see the air station removed completely and has thrown administrative hurdles in its path, to little avail.

Meanwhile, Japan supports construction of the Schwab airfield, but has agreed to pay $3 billion of the $8.7 billion cost to build a Marine Corps base on Guam to relocate some aviation units from Okinawa.

Most younger Okinawans, 66.3%, prefer the Schwab site over Ginowan or have no opinion, according to Yoneda. Conversely, 66.6% of Okinawans ages 65 and older want the air base off the island altogether, he said.

“I never disliked the U.S. military presence,” Tomonosuke Bise, 36, of Tomigusuku city, said as he shopped with his wife at the Aeon Mall on March 9.

The locals need more protection from aircraft mishaps and falling parts, but “U.S. bases are kind of fun,” he said. “I think it is a good part of Okinawa.” 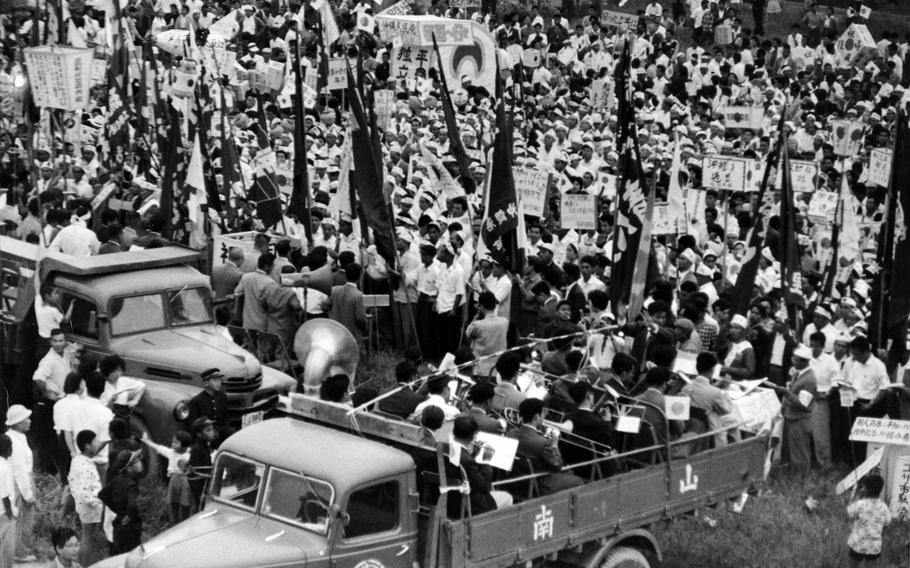 Okinawans carry signs and banners calling for “reversion to Japan” at a rally near the U.S. Civil Administration Ryukyus building in Naha, Okinawa, May 2, 1961. (Stars and Stripes)

Younger Okinawans are less concerned with the U.S. bases as a political issue than their parents and grandparents, which has led to “reluctant acceptance or moderate agreement,” Yoneda said.

As evidence, he pointed to the reelection of Nago Mayor Taketoyo Toguchi, 60, to a second term in January.

Toguchi, backed by Japan’s ruling Liberal Democratic Party, stayed quiet on the airfield issue, denoting “tacit approval,” according to a Jan. 23 report in the Asahi newspaper. He overtook the challenger, former city councilman Yohei Kishimoto, who opposed the Henoko project, with 57% of the 33,963 votes cast in a low-turnout election Jan. 23.

Nanami Kina, 18, a student of global and regional studies at the Ryukyus university, seemed to agree. The bases are necessary because “people make a living doing base-related jobs,” she told Stars and Stripes on April 15.

The share of island revenue generated by the U.S. presence fell from about 15% to 5% after the handover, according to data from the prefecture. Tourism filled the gap, growing from a relative handful of visitors annually in the late 1970s to 10 million in 2019, according to the Asahi newspaper in January 2021. The COVID-19 pandemic slashed that number in 2020 to 3.73 million, the report said.

Towa Maeda, 17, of Yonabaru town, said she is comfortable with the U.S. military presence as she strolled around American Village, a popular tourist destination on Okinawa, on March 9.

“I think it’s good. We’ve become close with the American people,” she said.

Ami Uchihira, 18, of Okinawa city, sees the occupation and the reversion as a positive part of Okinawa’s history.

“Having a connection with the U.S. is the advantage of Okinawa,” the University of the Ryukyus education student said April 15 on the Nishihara campus. “Having foreigners around has good influence on people’s values and people are more open to study abroad.”