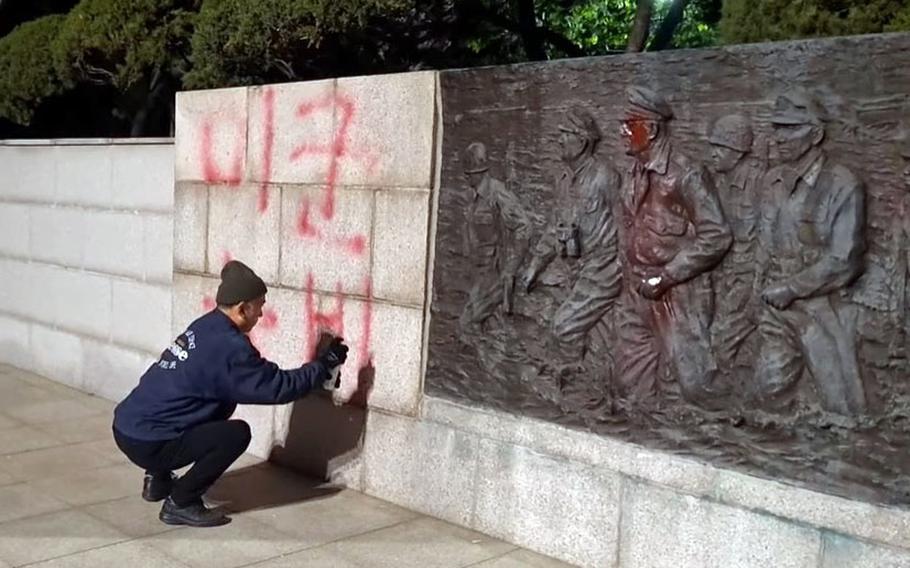 A man writes “Deport U.S. troops” with spray paint near a statue of Gen. Douglas MacArthur at Freedom Park in Incheon, South Korea, Thursday, April 28, 2022. The image is from a video posted to Facebook by Peace Agreement Movement Headquarters, an anti-U.S. military group. (Facebook)

Detectives from the Incheon Jungbu station took a 60-year-old Korean man into custody following a 2:50 a.m. disturbance call at Freedom Park, an Incheon police official told Stars and Stripes by phone on Thursday. Police did not identify the man but said he belongs to an activist group called the Peace Agreement Movement Headquarters.

The group describes itself on its website as a peaceful organization that opposes the deployment of American troops in South Korea and their joint military exercises.

The man is suspected of destroying public property by writing “Deport U.S. troops” in red paint at the base of MacArthur’s statue located at the park, the police official said.

The man is also accused of chiseling a nearby inscription honoring MacArthur’s place in South Korea’s history, as well as defacing MacArthur’s face on a separate memorial with red paint.

South Korean government officials customarily speak to the media on condition of anonymity.

The man has a history of run-ins with law enforcement, according to the police official, who said an investigation is underway. He did not say if any charges were filed against the man. A man stands alongside the defaced statue of Gen. Douglas MacArthur at Freedom Park in Incheon, South Korea, Thursday, April 28, 2021. The image is from a video posted to Facebook by Peace Agreement Movement Headquarters, an anti-U.S. military group. (Facebook)

Videos and photos posted Thursday on the group’s Facebook page showed an unidentified man using a hammer and red spray-paint to deface the memorials. A caption to the posts said the man acted “with a sense of loyalty derived from the only wish for the independence and unification of the fatherland.”

The group “makes a strong demand for the abolishment of [U.S.-South Korean] war games for an aggressive war on North Korea,” the post said.

The 10-foot-tall statue of MacArthur was erected in 1957 and has since been the source of ire for protesters. In 2018, a 61-year-old pastor was arrested and charged for setting the statue on fire, according to a Yonhap News Agency report.

MacArthur commanded the U.S.-led United Nations forces during the 1950-53 Korean War, and before that, Allied forces in the Pacific in World War II.

While his military achievements are reflected in his numerous awards, including a Medal of Honor for his campaign in the Philippines against Japanese forces, he is widely acknowledged in South Korean history for orchestrating an amphibious assault against North Korean forces in Incheon.

According to the South Korean Ministry of Patriots and Veterans Affairs website, the statue of MacArthur was erected in Freedom Park because it commands the view of the site of the Incheon landing.”