China protests another ‘routine’ US Navy transit through Taiwan Strait 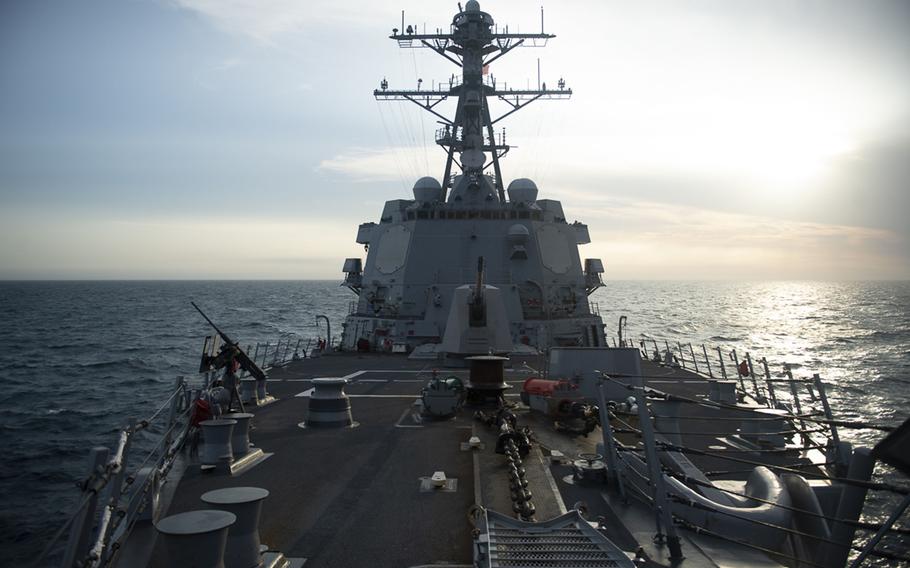 The Navy sent another guided-missile destroyer through the Taiwan Strait on Tuesday, the fourth U.S. warship to make the trip this year.

The USS Sampson continued a two-year-old Navy routine of sending a ship through the contentious, 110-mile-wide strait roughly once a month. It steamed northeast through the strait as part of a “routine transit,” 7th Fleet spokesman Lt. Nicholas Lingo told Stars and Stripes in an email Wednesday.

The strait separates mainland China from the island of Taiwan and offers a maritime route between the South China Sea and East China Sea.

“U.S. Navy ships routinely use the Taiwan Strait to transit between the two and have done so for many years,” Lingo said. The Sampson’s passage was not in response to any particular event or action.

China regards Taiwan as a breakaway province that must be reunited with the mainland, by force if necessary. Taiwan, a functioning democracy, is a friend to the U.S., which does not recognize the island as independent, but supports it with arms sales, public statements, visits from high-ranking political figures and other measures.

A delegation of six U.S. lawmakers, including Sen. Lindsey Graham, R-S.C., visited Taiwan earlier this month to meet with President Tsai Ing-wen and declare their support.

Lingo’s email said the Chinese military hailed the Sampson, but the communications were “consistent with international norms” and did not affect the ship’s movement.

A spokesman for the Chinese army condemned the Sampson’s passage as provocative.

“The US has been frequently carrying out provocative acts to send wrong signals to ‘Taiwan Independence’ forces, deliberately undermining peace and stability across the Taiwan Strait. China is firmly opposed to this,” said Army Senior Colonel Shi Yi, spokesperson for the Eastern Theater Command. The quote appeared Wednesday in China Military, the official news website of the of the Chinese army.

The Sampson’s passage was “hyped up…publicly” by the Navy, according to Shi’s statement. The Eastern Theatre Command tracked and monitored the ship’s course, according to the report.

“The troops of the PLA Eastern Theatre Command always stay on high alert to resolutely defend China’s national sovereignty and territorial integrity,” according to Shi’s statement.

The guided-missile destroyer USS Ralph Johnson steamed through the strait on Feb. 26 and again on March 17, and the destroyer USS Dewey made the trip on Jan. 26.

Last year, the Navy conducted almost monthly trips through the strait. In 2020, it made 13 transits, the most since 12 in 2016, according to a Congressional Research Service report in September. U.S. transits fell to six the next two years but increased again with nine in 2019.

The Sampson deployed as part of the aircraft carrier USS Abraham Lincoln’s strike group in January and has since been active in the Pacific. In late January, the destroyer arrived at Tonga to provide disaster relief for the remote islands following the undersea eruption of the Hunga-Tonga-Hunga-Ha'apai volcano.