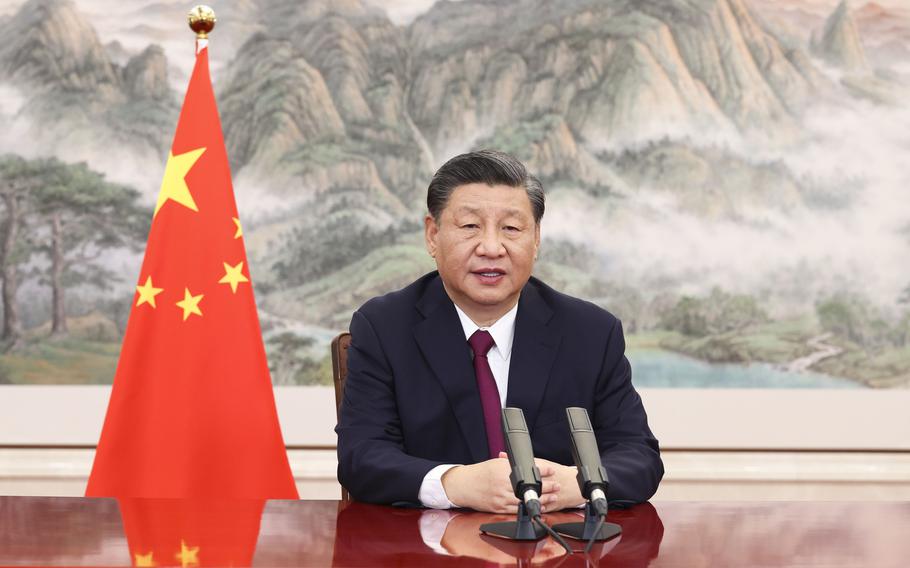 In this photo released by China's Xinhua News Agency, Chinese president Xi Jinping delivers a speech via video link to the opening ceremony of the Bo'ao Forum For Asia in Bo'ao in southern China's Hainan Province, Thursday, April 21, 2022. Xi said his government supports talks to resolve international disputes, but opposes the use of sanctions. (Huang Jingwen/AP)

Chinese drone-maker DJI, the world’s largest manufacturer of commercial drones, has suspended operations in Ukraine and Russia, becoming the first major Chinese company to openly quit the markets over a war that the leadership in Beijing refuses to condemn.

The privately owned Shenzhen-based company said in a statement on Tuesday that it was undergoing an internal compliance assessment and would temporarily halt activity in both countries pending an outcome. It was unclear what triggered the decision, which a company spokesperson told Chinese media was “not a statement targeting any particular country but rather a statement about our principles.”

Russia’s assault on Ukraine has increased scrutiny on DJI over fears that Beijing’s close geopolitical partnership with Moscow might hamper the company’s efforts to prevent its products from being used by the Russian army.

President Vladimir Putin’s invasion of Ukraine has put many Chinese companies in a bind. Beijing’s official position is to claim neutrality while maintaining rhetorical support for Russia and a normal economic relationship with its burgeoning geopolitical and trade partner - a potential lifeline for the Russian economy under the pressure of sanctions from the United States and its allies.

But for Chinese conglomerates with international reach, continuing to do business in Russia could mean losing access to far more important markets in Europe and North America if they end up being targeted by secondary sanctions from Western governments. Most Chinese companies with a presence in Russia have chosen to stay silent about their plans, while some have quietly adjusted operations to minimize exposure to the Russia market.

In March, Ukrainian Vice Prime Minister Mykhailo Fedorov published an open letter to DJI head Frank Wang, calling for him to stop doing business with Russia and alleging that the Russian army was using DJI products to guide its missiles.

Ukrainian officials have also raised concerns about apparent failures of DJI’s AeroScope system to reveal the location of nearby drones as well as their pilots. Some have alleged the system was being intentionally tampered with to allow Russian-flown drones to evade Ukrainian radar.

DJI has denied the accusations, saying that the Aeroscope function cannot be turned off and offered to set up geofencing to block all DJI drones from flying over Ukraine regardless of who is piloting them. Last week, the company released a statement saying that DJI does not market or sell products for military use and refuses to “customize or enable modifications that would enable our products for military use.”

Chinese companies seeking to lower their profile in Russia also face criticism domestically from Chinese nationalists who have strenuously pushed for boosting the Russian-Chinese alliance in the face of the West.

Early in the war, ride-hailing giant DiDi’s announcement that it was scrapping expansion plans in Russia was met with backlash from those who accused the company of abandoning China’s partner in a time of need. The company later reversed its decision.

Over a month later, DJI’s decision has been met with a more muted response, in part because commentators saw it as an evenhanded reflection of China’s official policy to not take sides. “Pretty good,” read one of the most-liked comments about the news on Chinese microblog Weibo, “this way, DJI announced it’s not helping either side, so if there are still traces of DJI on the battlefield, then it’s nothing to do with DJI.”

Even so, some nationalist commentators were unimpressed that DJI appeared to be acquiescing to international pressure. Asked why the statement was made in English first, DJI public relations director Xie Tiandi replied that the internal review was a “small thing” and “not worth mentioning” but he had been compelled to provide a Chinese statement after seeing inaccurate discussion on the platform.

The Washington Post’s Lyric Li in Seoul and Vic Chiang in Taipei, Taiwan, contributed to this report.