Chinese naval base in Solomons would be a ‘red line,’ Australia says 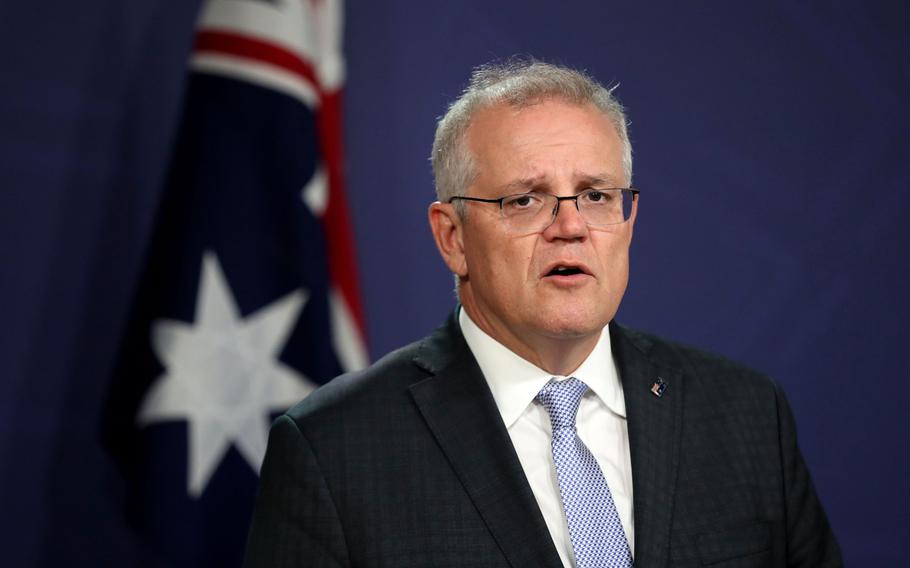 Australian Prime Minister Scott Morrison speaks during a news conference in Sydney on May 7, 2021. (Brendon Thorne/Bloomberg)

Australia Prime Minister Scott Morrison said a Chinese military base in the Solomon Islands would be a “red line” for his government, while fellow U.S. ally Japan became the latest to dispatch an envoy to the country over the issue.

Morrison is attempting to deflect criticism he did not move quickly enough to avoid a security agreement between Honiara and Beijing. Speaking at a press conference on Sunday in Darwin, Morrison said his determination to avoid a naval base in the Solomon Islands was shared not just by the U.S. but by the Pacific nation’s Prime Minister, Manasseh Sogavare.

Morrison said Sogavare had assured him personally there would be no military base in the Solomons. “This is a shared concern, not just Australia. This is Australia with regional governments,” he said.

On Friday, a delegation led by President Joe Biden’s East Asia czar Kurt Campbell visited the country to have a “substantial discussion” with Sogavare about the pact. The prime minister on Monday said in doing so, Washington had “revitalized relations” with the Solomon Islands and he welcomed, once again, a U.S. decision to reestablish its embassy.

“Contrary to misinformation promoted by anti-government critics, the Solomon Islands — China Security Cooperation is not about China establishing a military base in Solomon Islands but is about supporting the state to address its internal hard and soft security threats,” Sogavare said in a statement.

Chinese Foreign Ministry spokesman Wang Wenbin said at a press conference on Monday that any suggestion China was planning to establish a military base in the Solomon Islands was “entirely disinformation fabricated by people with ulterior motives.”

When asked by journalists what he would do in the event of the announcement of a Chinese military base in the Solomons, Morrison didn’t say.

Australia’s Liberal National coalition is working to contain the political fallout from the announcement in the past week that the Solomon Islands had signed a security agreement with China, the details of which have not been made public. A draft of the agreement leaked in late March would allow Chinese naval vessels a safe harbor just 1,200 miles from Australia’s coastline.

The U.S. and its allies have long been concerned about the possibility of China obtaining a military foothold in the Pacific, and the agreement is a major diplomatic victory for the Chinese government. Japan on Monday dispatched parliamentary vice minister Kentaro Uesugi for talks with officials in the Solomons.

Australia’s opposition Labor Party described the pact as the “worst failure of Australian foreign policy in the Pacific since the end of World War II.”

Speaking to the Australian Broadcasting Corporation on Monday morning, Labor’s shadow defense minister Brendan O’Connor said he would request a briefing from the government on what it would do if the “red line” was crossed by China.

“The fact that we have to turn to using that type of language is too little, too late. We should have been doing more,” he said.

Morrison’s government is currently campaigning for a fourth term in power at a national election due to be held on May 21. Despite Australia’s strong economy and record low unemployment, Morrison’s center-right government is trailing Labor in opinion polling.