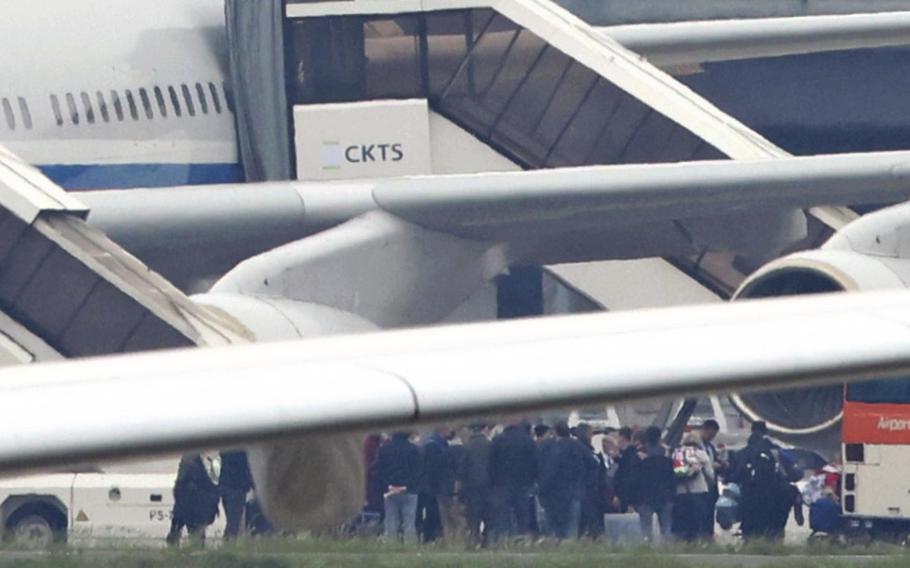 Diplomats from the Russian Embassy in Tokyo were among eight Russian nationals who flew out of Haneda Airport on Wednesday, following Japan’s request that they leave the country, the Foreign Ministry said.

According to the ministry, the eight comprised diplomats at the embassy and staff members at the office of the Russian trade representative in Japan. Among them were intelligence officers belonging to Russia’s Main Intelligence Directorate of the General Staff (GRU), and the Russian foreign intelligence service known as the SVR.

The Foreign Ministry requested on April 8 that these eight people leave the country, as a protest against Russia’s invasion of Ukraine, where Russian troops are increasingly suspected of killing many civilians.

They left the country by the deadline that the Japanese government had requested.

It is unusual for Japan to demand that multiple staff members leave the country at once, as asking a diplomat to depart a country constitutes a strong protest to the relevant government. According to the Foreign Ministry, the last such request was made in May 2012 to the then Syrian ambassador to Japan, in protest against the killing of civilians in Syria.

The Japanese government is wary that Russia will implement countermeasures, such as expelling diplomats from the Japanese Embassy in Russia. It will prepare for this possibility and make every effort to ensure that the protection of Japanese nationals in Russia is not hindered.

“At this point, there have been no countermeasures from Moscow,” Chief Cabinet Secretary Hirokazu Matsuno said a press conference on Wednesday. “We will continue to take all possible measures to protect the activities of Japanese residents and companies in Russia,” Matsuno stressed.

After the Russian invasion of Ukraine began, the Japanese government was initially cautious about expelling Russian diplomats, due to concerns over retaliation. But according to government officials, it decided to keep in step with Western countries, leaning toward the idea that a strong protest should be made against the killing of civilians, which is a war crime.

The Vienna Convention on Diplomatic Relations provides that a country can expel a foreign diplomat by notifying their country that the diplomat is persona non grata. The Japanese government has applied this provision in only three cases so far, according to the ministry.

However, the eight Russians have not been declared persona non grata. “Having comprehensively reviewed the case in light of the provision, we formally requested them to leave Japan,” said Hikariko Ono, the foreign ministry press secretary.

Russian Ambassador to Japan Mikhail Galuzin was not included among the eight. Japan does not appear to be considering going that far, while some countries, such as Lithuania, have expelled Russian ambassadors.

“The expulsion of the ambassador is one step short of forcing the embassy to be closed, which would mean a breakdown of diplomatic relations. At this point we do not envision that,” a senior Foreign Ministry official said.

But the Japanese government is also considering the possibility of expelling other diplomats if the situation deteriorates, such as Russia using chemical or biological weapons.

Russia is countering Poland’s expulsion of 45 Russians by sending away the same number of Polish diplomats, so it may very well take similar measures against Japan.

According to Japan’s Foreign Ministry, there were about 1,000 Japanese residents in Russia as of April 15. As the Japanese Embassy in Russia maintains a permanent presence of about 70 diplomats, the expulsion of eight of them -- if Russia takes such countermeasures -- would not have a significant impact on its operations.

Meanwhile, the Japanese government will step up its support for Ukraine, Prime Minister Fumio Kishida said Tuesday. At an online meeting with allies and friendly countries held at the invitation of U.S. President Joe Biden, Kishida pledged that Japan will increase its loans to Ukraine to 300 million dollars (about 38 billion yen).