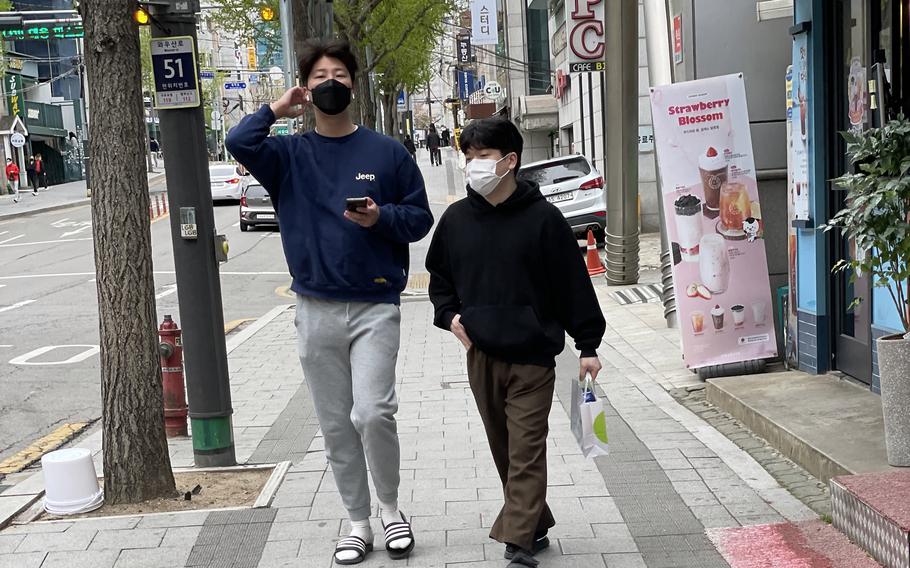 CAMP HUMPHREYS, South Korea — South Korea plans to end many of its pandemic restrictions, including social distancing measures and a seven-day quarantine, as new COVID-19 cases slowly give way.

A midnight business curfew and 10-person cap on gatherings will end Monday, the Central Disaster and Safety Countermeasure Headquarters announced Friday. Indoor dining at multiuse facilities such as movie theaters and religious buildings may resume on April 25.

The mandatory, seven-day quarantine for anyone who tests positive for COVID-19 may be lifted in late May. South Korea had shortened its quarantine to one week earlier this year.

One measure will not be lifted: Masks are still required indoors and outdoors in public settings, according to the headquarters announcement.

South Korea confirmed 125,846 new COVID-19 cases on Thursday, according to a daily update Friday by the Korean Disease Control and Prevention Agency. KDCA on April 5 reported 286,294 new cases, the most recent high point.

Seoul on Thursday reported 21,450 new cases; Gyeonggi province, the nation’s most populous and the home of Camp Humphreys and Osan Air Base, reported 32,584, according to KDCA.

Under the curfew, businesses that catered to an evening crowd, such as bars and clubs, opened their doors to the public earlier in the day. Club-goers stood in late-afternoon lines outside clubs in Seoul, a scene normally reserved for the evening hours in popular districts.

The upcoming changes come after two years of pandemic restrictions that provoked outrage from businesses large and small.

However, while the omicron wave of COVID-19 peaked in late March, the virus is giving way only grudgingly, South Korean Prime Minister Kim Boo-kyum said at a public briefing Friday.

“As the government made a commitment to the people … [it] is about to resolutely lift its social distancing measures that have been an important symbol of epidemic prevention and control measures,” he said.

Mask-wearing will be required for “a considerable period of time,” despite the waning case numbers, he said.

“Masks are still a very important means to protect oneself from infection,” Kim said.

Nearly 88% of the population received a first dose of a COVID-19 vaccine and 64.3% were administered a booster shot as of Friday, according to the KDCA.

USFK spokesman Wesley Hayes in an emailed statement to Stars and Stripes on Friday did not comment on potential changes to its current COVID-19 measures but said it will "continue to monitor and assess ... on a daily basis."

In addition to mimicking South Korea's COVID-19 measures throughout the pandemic, USFK imposed its own set of restrictions that have relaxed in recent weeks. Service members were allowed to go to Seoul for nonessential visits starting last month.

Service members are still required to "adhere to all South Korean rules, directives and laws regarding COVID," the command said in a statement March 23.