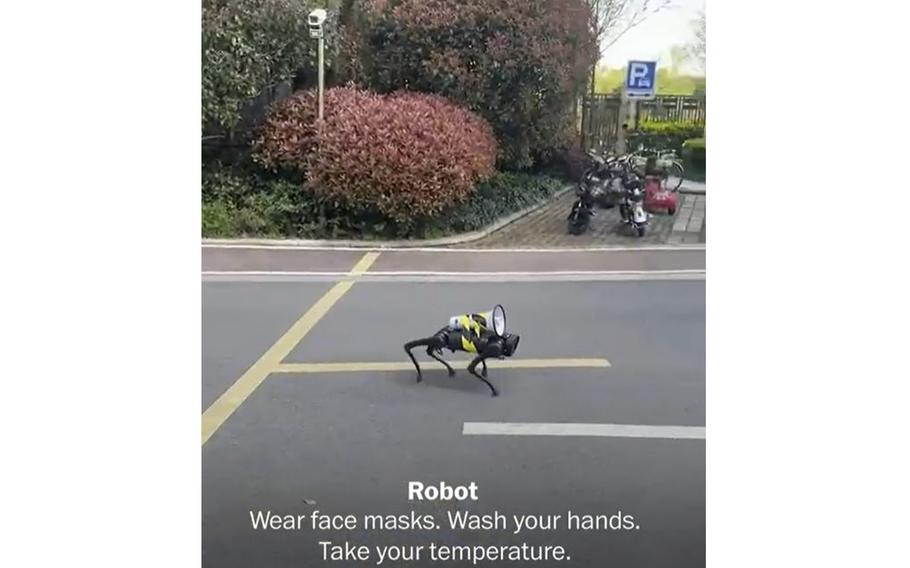 A video screen grab shows a robotic four-legged creature with a megaphone on top of its back playing recorded coronavirus pandemic instructions as it walks down a deserted street in Shanghai, China (The Washington Post)

For weeks, China's most populous city, Shanghai, has been under strict lockdown orders in an effort to control a coronavirus outbreak. Its 25 million residents have been trapped at home, struggling to feed themselves or get medical help for sick family members. Others have been corralled into makeshift quarantine centers and temporary hospitals, unsure when they will be allowed to leave.

Li Moyin, 34, was among those restricted to their homes. She lives with her parents, both in their 70s, in the Putuo district of Shanghai, where she has been confined since March 27, working as a part-time translator and trying to secure enough groceries for their household. For Li, who grew up in Shanghai, seeing the once-bustling financial hub - which residents previously believed was a model for balancing covid prevention measures with normal life - turn into a ghost town has been unsettling.

Talking over text and video calls with her boyfriend under lockdown elsewhere in the city, Li has spent hours debating whether such drastic measures are necessary, especially when the majority of Shanghai's cases are patients without severe symptoms. Li's boyfriend - who is from Wuhan, where covid was first detected and 11 million people experienced an unprecedented 76-day lockdown - argued in favor of the swift and harsh lockdowns.

The prospect of a long lockdown has started to take an emotional toll. One video shared widely shows residents of a large apartment compound in Putuo screaming from their balconies. In the video, a bystander can be heard saying, "That whole building is screaming. ... What's the root problem? People don't know how long this situation will last."

Under government rules, the almost 300,000 residents who have tested positive for the coronavirus since early March and their close contacts must be sent to mass quarantine centers or to hospitals, depending on the severity of their symptoms. Many residents fear this more than getting the virus, unwilling to be confined in the quickly built temporary field hospitals, some of them repurposed schools or construction sites. They often do not have doctors and nurses on hand or private facilities for sleeping or bathing.

Videos have shown people fighting over stretched-thin supplies, trying to plug leaks, and in some cases attempting to escape centers. On Thursday, residents at an apartment complex in the Zhangjiang high-tech park in Pudong clashed with police after authorities said the compound would be converted into an isolation site. Footage posted online showed police dragging residents away as a woman begs them to stop and bystanders yell, "Why are you hitting old people? Let them go!"

The rest of the city must stay home under orders enforced by community workers and police. Drones fly above, communicating with the public or sometimes delivering medicine to the elderly - adding to the eerie emptiness of a city on pause.

The measures, which began in phases in late March before being extended across the city in early April, gave residents and officials little time to prepare. Food shortages are rife across the city. Restrictions have caused supply chain bottlenecks and strained the neighborhood committees that are responsible for looking after the locked-down residents. Many like Li have had to rely entirely on themselves to figure out how to survive.

"We were in limbo, and many including my parents felt betrayed. It was painful for them to wake up to the fact that we were left on our own," Li said.

The reality does not match up with the official narrative of ample food and medical supplies. Wu Peiying, 27, who works in business development, noticed an article on WeChat last week that showcased her neighborhood as a success story. Local party propaganda praised the neighborhood committee of Changfeng Xincun, where Wu lives, for sending 25,000 packages of food a day to the 100,000 residents in her area in western Shanghai.

But in the last two weeks, Wu said, she only received one package: a plastic bag containing one carrot, a cabbage, a yam and a few chicken wings that had already gone bad.

Others showed residents shouting from their windows: "Save us. We don't have enough to eat."

Wu, like many Shanghai residents, has to rely on "group buying," teaming up with neighbors to source supplies and order in bulk. As the head of that effort for more than 350 people in her residential compound, Wu must verify sellers, negotiate prices, and ensure delivery workers have the right passes to travel to the compound and drop off the goods.

"Every day I have to ask around for connections to buy rice or hazmat suits," she said. "Why are we the ones to bear these responsibilities?" she said. Wu shared screenshots of her recent efforts to secure packages of rice, purchased a week ago, for the group.

"Good morning, Mr. Chen. Are you going to ship our products today?"

"The current situation is that our shipping capacity is severely limited. We are trying our best to find a solution. I will let you know in advance when it's your turn."

"You said on Sunday that we should be able to receive the goods today or tomorrow. Please help us rush the shipment. Our neighborhood has already made a complaint to the State Council. Because since April 2, we have only received one package of supplies with one carrot, one yam and one cabbage. Really, many elderly people are going to starve."

"The government has been ignoring our neighborhood, the Changfeng Street in Putuo District."

"I don't know how it is in other neighborhoods."

"But our neighborhood is in great crisis."

"Thank you very much. It is really very urgent for us right now."

Ashley Chi, a 28-year-old product manager at a tech company in Shanghai, said her neighbors leave supplies outside their doors for each other - she left extra sanitary napkins outside hers - and barter among themselves. Chi recently traded about one cup of soy sauce for five liters of bottled water.

"At first, he wanted to pay me, but who needs money now? I need water!" she said.

On Monday, Shanghai officials said areas without a coronavirus case in the previous 14 days could begin to allow people to leave their compounds. But the messaging was mixed on the ground: Some residents were still instructed to stay put, while others could go out for just an hour.

Some of those who left their homes were disheartened by what they saw.

Tam, a 35-year-old in finance, left his apartment compound Tuesday for the first time in 11 days, to find all the stores and businesses around him shut. On the road, he saw several dead cats, street pets that were previously fed by neighbors leaving food out.

"Seeing those starved-to-death animals, I felt depressed," Tam said, giving only his surname out of privacy concerns.

Across the city, people are voicing frustration with the local government's lack of preparation and the departure from targeted controls that once limited disruption to life. On Thursday, two hashtags, one of them unrelated to covid, on the microblog Weibo were flooded with angry posts before they were censored. Critics say the government's insistence on its zero-covid policy sacrifices ordinary citizens to reinforce the decisions of China's top leaders.

For many, the chaos has cost their families too much. Fu Dinghua, 55, watched her mother, suffering from kidney disease, die Monday night after being forced to relocate from a hospital requisitioned for covid patients.

Fu said her mother was forced into an ambulance, sandwiched between equipment and luggage, unable to lie down. The next day, she fell unconscious and could not be revived. She would have turned 91 next Thursday.

"I know she didn't have that long left, but for her suffer like this, I feel incredible regret," Fu said.