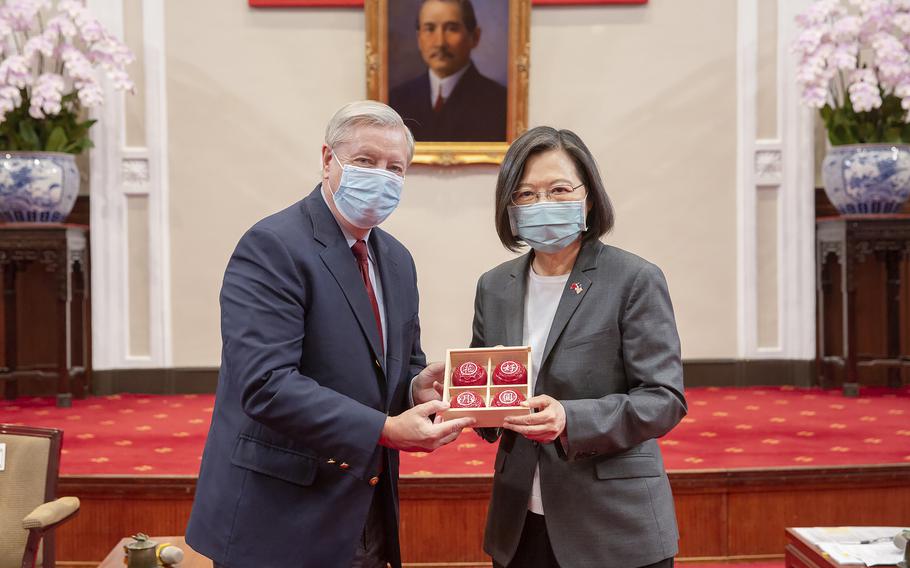 A group of senior U.S. senators delivered a message of support for Taiwan during a visit Friday, a move that China answered with a display of military force.

Members of the delegation, including Republican Lindsey Graham, told Beijing that the U.S. will start making China account for bullying Taiwan and supporting Russian President Vladimir Putin's invasion of Ukraine.

"Here is my promise to you and the Taiwanese people: We are going to start making China pay a greater price for what they are doing all over the world," Graham said during a meeting with President Tsai Ing-wen in Taipei. "The support for Putin must come with a price. The never-ending cyberattack on your economy and people by the Communist Chinese needs to come with a price."

The People's Liberation Army said it conducted air and naval training near Taiwan on Friday in response to the "wrong signals" recently sent by the U.S. The maneuvers included ships, bombers and fighters, said Shi Yi, spokesperson for the Eastern Theater Command, adding the military would remain on high alert to safeguard national sovereignty and regional peace.

The Russian invasion has raised concern that China may follow through on its oft-repeated threat to take control of the democratic island by force. Events in Ukraine have also dented confidence that world powers would be able to prevent a similar crisis from erupting over the island.

Graham and other members of the delegation emphasized the strength of bipartisan commitment in the U.S. on defending Taiwan. Bob Menendez, a Democrat and head of the Senate Foreign Relations Committee, said the delegation ignored a warning from a "very unhappy" China not to travel to Taipei, adding: "It won't dissuade us in the future in supporting Taiwan."

The Chinese Embassy in Washington said in a statement the U.S. should end all forms of official interaction with Taiwan. Beijing views the contacts as a violation of its stance that there is just "one China."

The senators should avoid making "irresponsible remarks," Chinese Foreign Ministry spokesman Zhao Lijian said at a regular press briefing in Beijing. When asked later about scientific exchanges between Russia and his nation, Zhao said they're "advancing normally," adding the two sides "will continue to follow the concept of lasting friendship."

While Tsai's government asserts Taiwan is an already a de facto independent nation in need of wider international recognition, Beijing claims the island as part of its territory that it must reclaim by force if necessary. China has steadily increased its pressure on Taiwan, more than doubling its military forays into the island's air-defense identification zone last year.

Reports last week said U.S. House Speaker Nancy Pelosi would travel to Taiwan as part of a trip to Asia, a visit that would have been the first by the person in her position in 25 years. Pelosi's office declined to confirm that, and the Asia trip was later canceled because she tested positive for Covid-19.