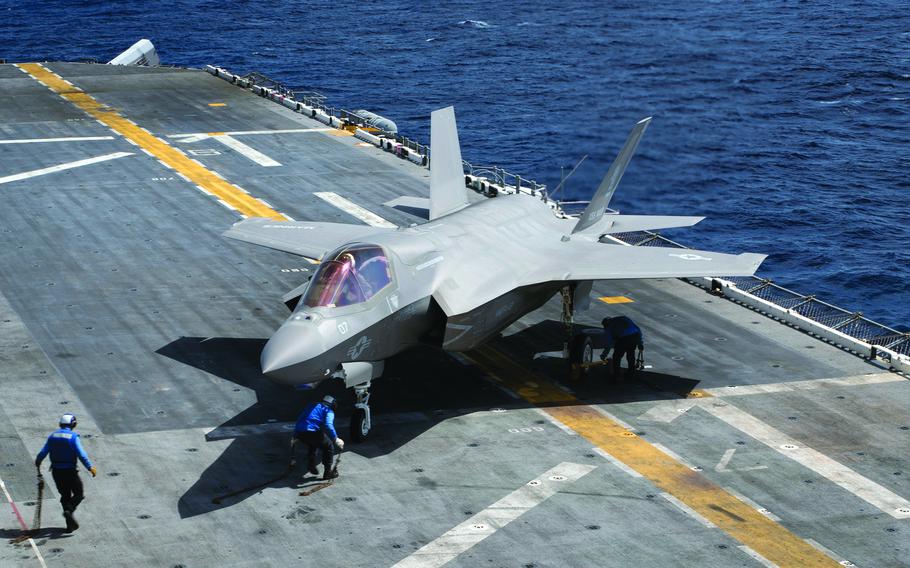 Marine Corps stealth fighters will fly south to train with their Australian counterparts in August and September, according to Marines in Japan and Australia.

Rusavskiy didn’t provide the number of aircraft going to the drills or which unit they’re from, but he said the Marines are excited about training with the Australians.

The F-35B is the Marine Corps’ variation of the joint strike fighter and comes with short-takeoff and vertical-landing capabilities that allow it to operate from aircraft carriers and flat-deck amphibious assault ships like the USS America, homeported at Sasebo Naval Base, Japan.

Pitch Black involves the Royal Australian Air Force working with regional, coalition and allied nations. It will take place from Aug. 19 to Sept. 8, the Australian Defence Department said in an email Thursday to Stars and Stripes.

“Planning for Exercise Pitch Black 2022 is still underway and confirmation of specific capabilities is still being confirmed,” the department said.

In 2014, the Australian government agreed to buy 72 conventional takeoff and landing F-35As to replace a fleet of F/A-18A/B Classic Hornet fighters. As of March 1, the Australian Defence Force had accepted 48 F-35As, the department said.

Marine Rotational Force – Darwin will be involved in Pitch Black alongside the F-35Bs, Capt. Joseph DiPietro, a spokesman for the force, said by phone Tuesday.

A contingent of 2,200 U.S. Marines began arriving in March for a six-month rotation to Australia’s Northern Territory, their 11th deployment to Darwin since 2012.

The Marines will train with Australian troops and other friendly forces to respond to a crisis in the region, the service said in a March 14 statement.

Marines from Air Control Group 38, part of the rotational force, will also take part in Pitch Black, he said.

Pitch Black will involve about 20 armed forces from around the world honing aviation capabilities together. The last exercise took place in 2018 due to the coronavirus pandemic, DiPietro said.