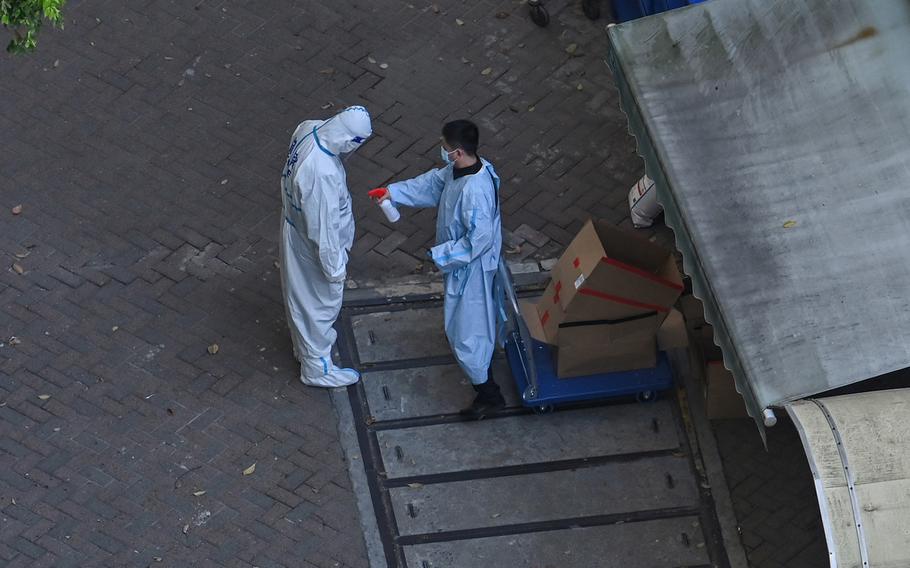 A policeman wearing personal protective equipment is sprayed with disinfectant during a COVID-19 lockdown in the Jing’an district in Shanghai, China, on April 7, 2022. (Hector Retamal/AFP/Getty Images/TNS)

(Tribune News Service) — Shanghai announced another round of mass coronavirus testing, while the southern metropolis of Guangzhou said it will do the same for all 18 million residents, as authorities accelerate efforts to curb China’s worst outbreak since the early days of the pandemic.

The nationwide tally for Friday was 25,701 new cases, with more than 23,600 from Shanghai, a new record, according to official data.

Shanghai Deputy Mayor Zong Ming announced tweaks to the government’s lockdown policy at a press briefing Saturday. Overall measures remained stringent, however, as residents living in communities with COVID cases in the past seven days are barred from leaving their homes, while those residing in compounds without infections in the past week won’t need to be confined to their homes, but can’t leave those areas.

People from compounds where no COVID cases have been detected in the past 14 days can move more freely, but must adhere to social distancing rules.

Shanghai is building isolation facilities for hundreds of thousands of people at conference centers as the country sticks to its COVID zero strategy to eliminate infections. China’s financial hub has seen cases grow quickly since a March 28-imposed lockdown that has now been extended to the entire city.

The city of 25 million residents is struggling to provide basic groceries and medical care to families that have been sealed off in their homes for more than a week. The failure has triggered growing public discontent. Friday’s infections in Shanghai include more than 22,600 asymptomatic cases, according to a statement from the municipal government.

A prolonged outbreak also threatens China’s supply chain. Containers loaded with food and chemicals are piling up at China’s biggest port in Shanghai as the lockdown measures led to a shortage of truckers to pick up boxes at the docks.

In Guangzhou, all 11 districts of the city announced plans to begin coronavirus testing, China Central Television reported on Saturday. It reported two confirmed cases and an asymptomatic one for Friday, according to official data. Guangzhou, which hosts one of China’s top container ports, conducted mass testing in December after a cargo flight crew worker tested positive.

The city health authorities indicated that the small number of cases could be just the tip of an iceberg and omicron may have already spread far and wide in the community.

“The neighborhood is populous and dense, with frequent cross-district traffic,” Zhang Zhoubin, spokesman for the Guangzhou Center for Disease Control and Prevention, said at a briefing on Saturday. “Given the greater transmissibility of omicron, the risk of subsequent spread and difficulty in containing it is extremely high.”

That has prompted authorities to shut down all indoor and semi-indoor venues and suspend in-class teaching in Guangzhou’s two districts.

Beijing authorities said they will distribute 200,000 rapid antigen tests in three batches in the next five days at subway stops in a district that has detected COVID infections. The capital city marked a northeastern neighborhood as high-risk on Saturday due to the detection of a cluster outbreak and eight infections in the past two weeks.

Yantian terminal at the port of Shenzhen in southern China will halt the collection and delivery of containers at all berths for about two hours Sunday to maintain systems, according to an advisory sent to customers. This is the second such suspension this week after a halt ordered on Thursday. It isn’t immediately clear if the maintenance is COVID-related.

The U.S. State Department has allowed the voluntary departure of non-emergency staff at the Shanghai consulate as well as employees’ family members. It also said Americans should not visit Hong Kong, Shanghai and Jilin — recent virus hot spots in China with tens of thousands of cases — warning of “arbitrary enforcement” of COVID-19 restrictions and “the risk of parents and children being separated.”