India optimistic on US defense talks despite Russia strain 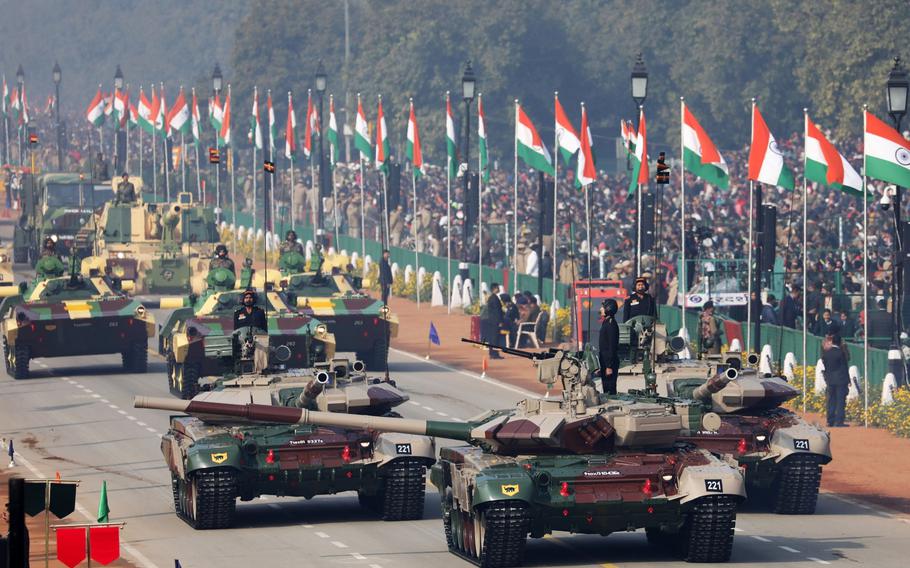 Indian Army T-90 tanks move along the Rajpath during the Republic Day parade in New Delhi on Jan. 26, 2020. (T. Narayan/Bloomberg)

India is optimistic about talks next week with the U.S. on military cooperation even as the Biden administration becomes more vocal in rebuking New Delhi over its reluctance to criticize Russia’s war in Ukraine, people familiar with the matter said.

Recent public statements from Washington warning India about consequences for purchases of weapons and discounted oil from Russia are contrary to private discussions between the two sides, the people said, asking for anonymity because of the sensitive nature of the talks. They cited conversations in New Delhi last month with U.S. Assistant Secretary of State Victoria Nuland, who offered help in finding alternative sources of weapons that could be used to counter neighbors Pakistan and China.

India informed Nuland that the alternatives to Russian weapons were too expensive, according to people familiar with the matter. In addition, Russian companies are more willing to set up joint ventures with Indian companies that include some technology transfer, something U.S. defense firms are reluctant to do, they said.

Foreign and defense ministers of the U.S. and India will meet in Washington on Monday and Tuesday for the first two-plus-two dialog since Joe Biden took office, India’s Ministry of External Affairs said at its weekly briefing Thursday. Apart from defense cooperation, Vladimir Putin’s attack on Ukraine and the ensuing sanctions will also be discussed at these meetings, the people said.

Tensions between the U.S. and India have risen in recent weeks over Prime Minister Narendra Modi’s reluctance to criticize Putin, which has complicated a budding security partnership between the democracies in countering China’s influence.

On Wednesday, in some of the sharpest language so far, Biden’s top economic adviser, Brian Deese, said the U.S. has told India that the consequences of a “more explicit strategic alignment” with Moscow would be “significant and long-term.”

“There are certainly areas where we have been disappointed by both China and India’s decisions, in the context of the invasion,” Deese, the director of the White House National Economic Council, told reporters.

Russia is an “important partner in a variety of areas,” the minister told parliament. “Like all other countries, we too are assessing the implications” of Russia’s war in Ukraine and “deciding what is best for our national interest.”

The MEA did not respond to Deese’s comments. However, spokesman Arindam Bagchi told reporters there was “no pressure on India to reduce economic relations with Russia.”

“India will continue to press for an end to the violence in Ukraine and resolution dispute through diplomacy,” he added.