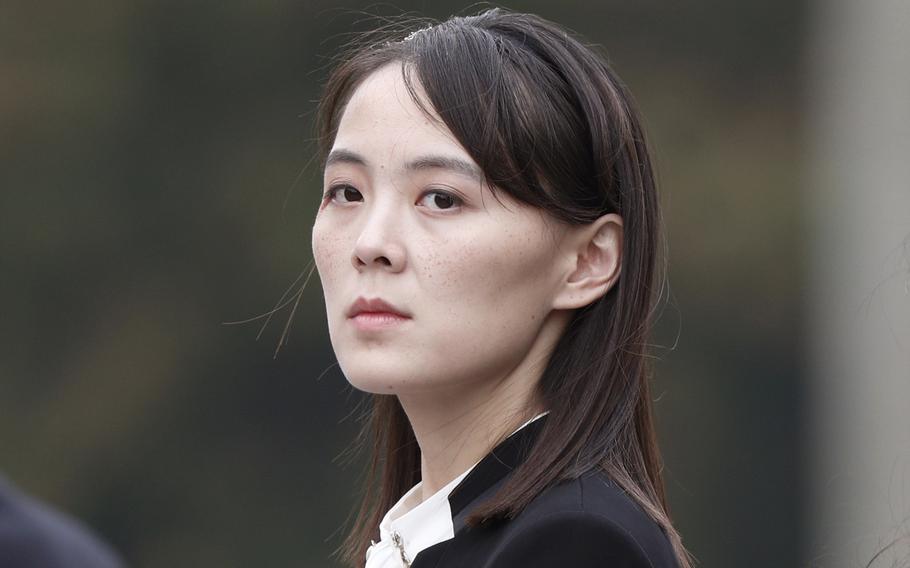 SEOUL, South Korea — The influential sister of North Korean leader Kim Jong Un called the South Korean defense minister a "scum-like guy" for talking about preemptive strikes on the North, warning Sunday that the South may face "a serious threat."

Kim Yo Jong's statement came amid heightened tensions between the rival Koreas over the North's spate of weapons tests this year, including its first intercontinental ballistic missile launch in more than four years. Some experts say her statement could signal that North Korea will conduct more significant weapons tests soon and take a hardline stance on South Korea.

The ICBM test on March 24 that broke North Korea's four-year moratorium on big weapons tests was an embarrassment to South Korea's liberal President Moon Jae-in, who has pushed hard to achieve greater reconciliation between the countries and find a peaceful resolution to the North Korean nuclear crisis.

During a visit to the country's strategic missile command on Friday, South Korean Defense Minister Suh Wook said that South Korea has the ability and readiness to launch precision strikes on North Korea if it detects the North intends to fire missiles at South Korea. Seoul has long maintained such a preemptive attack strategy to cope with North Korea's growing missile and nuclear threats, but it was highly unusual for a senior Seoul official under the Moon administration to publicly discuss it.

"The senseless and scum-like guy dare mention a 'preemptive strike' at a nuclear weapons state," Kim Yo Jong said in a statement carried by state media. "South Korea may face a serious threat owing to the reckless remarks made by its defense minister."

"South Korea should discipline itself if it wants to stave off disaster," she said.

Kim Yo Jong, a senior official in the North's ruling Workers' Party, is in charge of relations with Seoul and Washington. South Korea's spy service says she is the North's No. 2 official behind her brother.

Pak Jong Chon, a secretary in the Workers' Party's central committee, separately warned that "any slight misjudgment and ill statement rattling the other party under the present situation" may trigger "a dangerous conflict and a full-blown war."

Relations between the Koreas briefly flourished in 2018 after North Korea abruptly reached out to South Korea and the United States and expressed its willingness to put its nuclear program on the bargaining table. At the time, Kim Yo Jong visited South Korea to attend the opening ceremony of the Winter Olympics and conveyed her brother's invitation for Moon to visit the North. Kim Jong Un and Moon eventually met three times in 2018.

But North Korea turned a colder shoulder on Moon and cut off ties with South Korea after its broader nuclear diplomacy with the United States collapsed in 2019 due to disputes over U.S.-led economic sanctions on the North.

"Kim Yo Jong's remarks foreshadow another significant military test," said Leif-Eric Easley, a professor at Ewha University in Seoul. "Similar to how Moscow and Beijing try to gaslight the world that Russia's invasion of Ukraine is somehow the fault of NATO, Pyongyang will blame its nuclear and missile advancements on the U.S.-South Korea alliance."

Analyst Cheong Seong-Chang at the private Sejong Institute in South Korea said that the back-to-back North Korean statements indicate that it will take hardline steps toward South Korea. He said that Pyongyang is sensitive to Seoul's preemptive attack capability because it lacks military assets and capability to detect South Korean strikes in advance.

But Cheong worried that Seoul's public comments on preemptive strikes would result in strengthening the voices of hardline officials in Pyongyang and raising tensions between the Koreas.

Moon's single five-year term ends in May, when he will be replaced by conservative Yoon Suk Yeol, who openly discussed the preemptive attack strategy on North Korea during his campaign. His liberal rivals criticized him for unnecessarily provoking North Korea, but Yoon said he would pursue a principled approach on Pyongyang.

The United States has urged North Korea to return to talks without preconditions, but the North has rejected such an overture saying the U.S. must first drop its hostility toward it. Kim Jong Un has repeatedly vowed to expand his nuclear arsenal as a diplomatic stalemate with Washington continues.

Some experts say the North's recent missile tests were meant to perfect its weapons technology, boost its leverage in future negotiations with the U.S. and secure stronger internal loyalty. They say North Korea could soon conduct another ICBM launch, a launch of a satellite-carrying rocket or a test of a nuclear device in coming weeks.