China’s electric car battery champion has plans for $5B plant in N. America; It’s mostly welcome in US 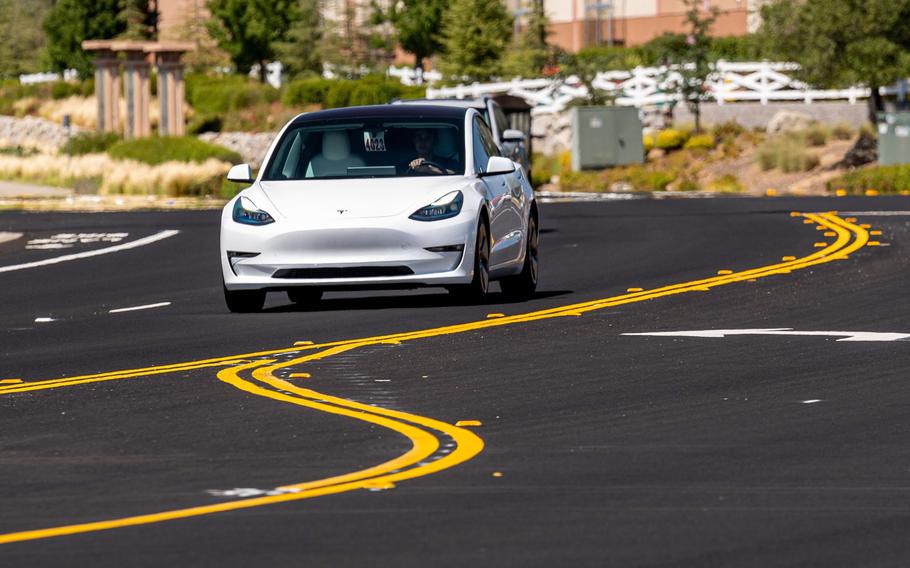 A Tesla Model 3 travels on a road in Rocklin, Calif., on July 21, 2021. According to reports on Friday, March 25, 2022, the world’s biggest manufacturer of electric-vehicle batteries is scouting sites for a new $5 billion battery plant in North America. (David Paul Morris/Bloomberg)

Contemporary Amperex Technology, the world's biggest manufacturer of electric-vehicle batteries, is scouting sites for a new $5 billion battery plant in North America. It's considering locations in Mexico, Canada, and the U.S. for an 80 gigawatt-hour plant that would supply Tesla as well as other EV makers, according to people familiar with the project.

The conventional wisdom is that China, with its state-led economic planning, has outflanked the U.S. in a global chess game that has put the latter's economic, energy and national security at risk. CATL, which has risen rapidly to become the global battery leader with the help of state backing, is the poster child for that strategy. So how are people in the U.S. battery world reacting to its potential arrival?

Jim Greenberger, the executive director of NAATBatt International, a trade group that advocates for battery development and manufacturing in the U.S., said he has no objection to a CATL plant in North America, so long as the company brings battery manufacturing technology and know-how to the U.S., not just low-wage assembly jobs. The U.S. should mimic China's joint ventures with western businesses.

"The principle would be largely the same: we'll give you market access, and in exchange, you have to transfer tech to us and our people," he said. "That plants the seeds for future economic development that could be quite valuable." Battery cell design, manufacturing equipment, and factory operations all are areas where, as Greenberger sees it, the U.S. could use some tutoring.

Jeff Chamberlain is the chief executive officer of Volta Energy Technologies, a venture capital firm spun out of Argonne National Laboratory to invest in energy storage. He describes Volta's mission as "the free-market capitalist democratic approach to what the Chinese are doing."

Chamberlain is in favor of CATL putting stakes in the ground in the U.S., for several reasons. First, the U.S. is going to face a supply-chain crunch on batteries, so it needs all the cells it can get. Second, building those cells here will create tens of thousands of jobs. Third, the more batteries the U.S. produces domestically, the faster it will speed EV adoption and grow a domestic supply chain - in other words, the pie will get bigger.

"The whole thing about this energy transition, this decarbonization that's happening," Chamberlain told me, "is how quickly can we scale and how quickly can we integrate the supply chain? We want CATL here because it enables both."

As a VC, Chamberlain offers one small caveat for startups who might want to work with CATL: their IP could filter back to China, so they'll need to be vigilant about protection.

Another item to consider: Would a small battery startup be concerned about being undercut by CATL, whose massive scale and cost competitiveness makes even its fellow cell-making giants sweat?

Chaitanya Sharma is a former Tesla engineer who's now the CEO of iM3NY, a startup building a battery plant on a former IBM campus in Endicott, N.Y. The company aims to commercialize a chemistry patented by Stanley Whittingham, who won the Nobel prize in 2019 for the development of lithium-ion batteries.

Sharma said he was happy when he read the news about CATL. His company makes prismatic, or rectangular-shaped, batteries that are less common in the U.S. than the cylindrical cells Tesla uses, or the pouch cells in GM's Ultium batteries. As a result, he's struggled to find a supplier to make rectangular-shaped cans and lids to house his cells.

CATL also makes prismatic cells. Sharma said piggybacking on a giant buyer could make it easier and cheaper for his company to get what it needs. And battery demand is so strong right now, from many different industries, that he's not worried about being squashed by bigger players.

"There's enough volume here for every different kind of manufacturer," Sharma told me. "I'm excited about CATL coming and driving the raw material supply chain costs down, so we will be welcoming them."

One person who isn't so enthusiastic is Abigail Seadler Wulf, the director of critical minerals strategy at Securing America's Future Energy, or SAFE, the Washington think tank advocating for U.S. energy independence and supply chain security. She said the U.S. hasn't made a serious commitment to develop the capacity to process battery materials or make battery components, so CATL's entry could exacerbate the country's dependence on China.

"CATL's expansion into the United States should worry anyone who hopes to wean ourselves off of dangerous over-dependence on China for the materials we need for the energy transition,'' she said in an email. "We see what's happening with the EU's over-reliance on Russia for their energy today; we don't want to be in that situation with batteries and China tomorrow."