Zelensky urges Japan to help with ‘tsunami’ of Russian invasion 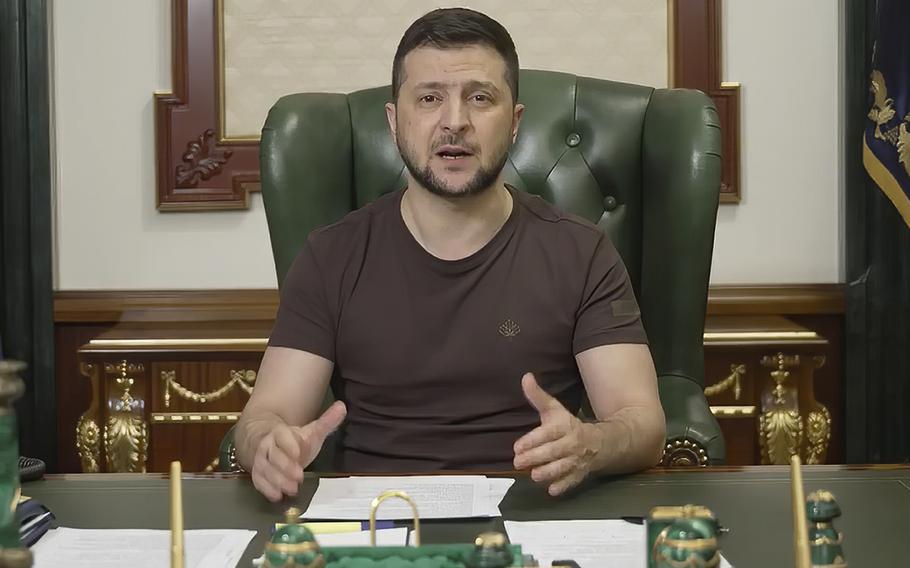 In a speech Wednesday to the Japanese Diet, Zelensky reiterated his call for a trade embargo against Russia. The video address -- like his other appeals to supportive parliaments -- was peppered with references intended to strike a chord locally, such as an allusion to the 2011 tsunami that devastated northeast Japan and sparked a nuclear disaster.

“To stop the tsunami of brutal invasion, trade with Russia must be banned and companies must leave the Russian market so that money is not spent on the Russian military,” he said, praising Japan for being the first Asian country to offer help. Lawmakers gave him a standing ovation.

Zelensky accused Russia of turning a nuclear sites into battlefields -- a sensitive issue in Japan, the only country to have suffered a nuclear attack. And he warned of reports that Russia was preparing attacks using chemical weapons such as sarin, which a terrorist group used in 1994 to carry out an attack on the Tokyo subway. Zelensky even called for reforming the United Nations, an issue Japan has long campaigned for.

Japan has imposed stringent sanctions on Russia over the invasion, staying in step with the U.S., its only military ally, while refusing to force its companies to exit energy joint ventures. Prime Minister Fumio Kishida’s government has condemned Moscow for “shaking the foundations of the international order” and stretched the country’s pacifist principles by sending Ukraine nonlethal military equipment, such as helmets and bullet-proof jackets.

Kishida departs later in the day for Belgium, where he is set to take part in a Group of Seven summit on the Ukraine invasion. The U.S. and its allies are planning to impose further sanctions on Russia on Thursday, an aide to President Joe Biden told reporters.

Moscow has halted talks with Japan aimed at reaching a formal peace treaty ending World War II, which have been stymied by a dispute over a small group of islands seized by the Soviet Union at the end of the conflict.

Polls show Japan’s sanctions enjoy wide support with the public. A survey by the Asahi newspaper conducted March 19-20 found two-thirds of respondents said the measures should stay in place even if they affect the economy. Approval of Kishida’s government has also ticked up in recent polls, with a key upper house election due in four months.

“The Japanese people share with the prime minister the view that universal values are important,” Deputy Chief Cabinet Secretary Seiji Kihara told Bloomberg last week. “I think they want to act to defend those values.”