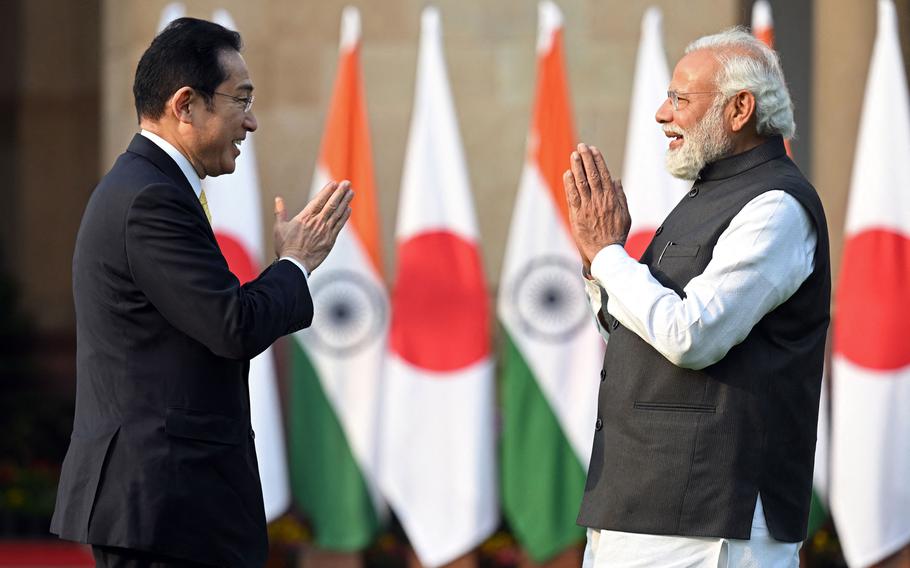 Japan's Prime Minister Fumio Kishida, left, and his Indian counterpart, Narendra Modi, before their meeting at the lawns of the Hyderabad House in New Delhi, India, on Saturday, March 19, 2022. (JEWEL SAMAD/AFP)

Borders cannot be allowed to be changed by force, Kishida said after his meeting with India’s Narendra Modi. Vladimir Putin’s attack on his neighbor was “serious” and has “shaken the global order,” the Japanese leader added. In contrast Modi confined his comments to economic issues.

Kishida is in India on a two-day visit that ends Sunday.

Both countries have deepened security ties over the last few years and are members of the so-called Quad grouping along with the U.S. and Australia. Both sides share concerns about China’s increasing assertiveness in the region.

India has been in a two-year border conflict with China along their Himalayan frontier, with both sides amassing troops, tanks and artillery guns. Japan is in a dispute with China over century-old claims to a set of uninhabited islands in the East China Sea — called Senkaku in Japan and Diaoyu in China.

However, Tokyo and New Delhi have taken divergent views on Russia’s war in Ukraine.

India is under increased scrutiny for not publicly censuring Russia. New Delhi, dependent on Moscow for weapons in its standoff with China, abstained from voting on United Nations Security Council and general assembly resolutions condemning the invasion. Japan has joined several Western countries in announcing sanctions against Russia and taken a tough line with Moscow.

Japan and India will continue to work for a ceasefire and peaceful resolution of the war in Ukraine, Kishida said. India has said in the past that Moscow and Kyiv should use dialogue to end the war.

Kishida’s visit comes amid a flurry of meetings between New Delhi and its Quad partners as it seeks to shore up support for its position on the war in Ukraine.