India says it 'accidentally' fired a missile into Pakistan 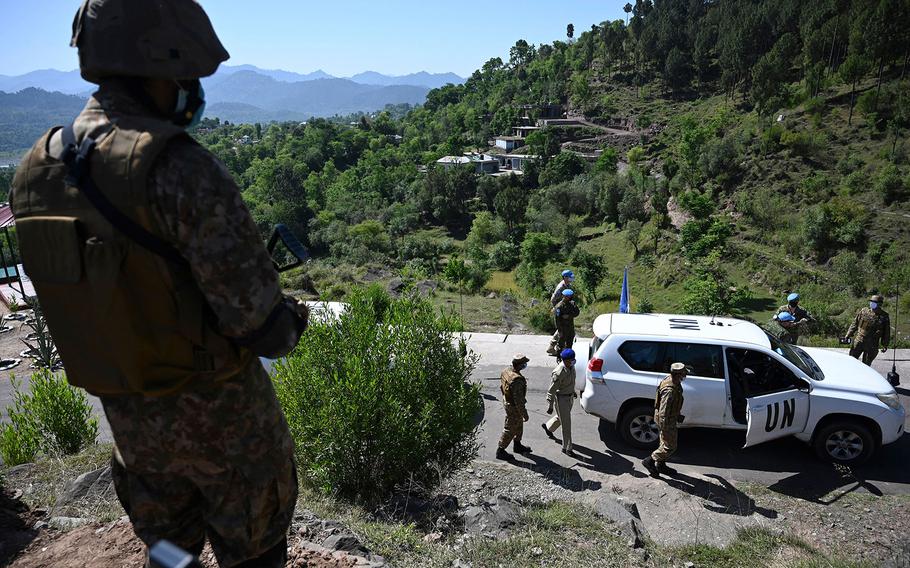 A Pakistani soldier stands guard on a post as a vehicle carrying UN military observers arrives to visit near the Line of Control, de facto border between India and Pakistan at Salohi village in Poonch district of Pakistan-administered Kashmir on April 26, 2021. (Aamir Qureshi/AFP)

(Tribune News Service) — A "technical malfunction" led to India accidentally firing off a missile that landed in Pakistan earlier this week, the Defense Ministry said in a statement.

"A technical malfunction led to the accidental firing of a missile," the statement from India's Ministry of Defense said, adding the incident occurred Wednesday during "routine maintenance." An inquiry had been ordered into the accident.

Pakistan's military had said an "unarmed supersonic missile" from India violated its airspace in the eastern province of Punjab but caused no casualties. Islamabad had protested the violation in the area of Mian Channu in Khanewal district in eastern Punjab province on Wednesday.

The Pakistani air force tracked the flight path of the missile from its "point of origin near Sirsa in India," military spokesman Major General Babar Iftikhar told reporters in the northern city of Rawalpindi. "The flight path of this object endangered many domestic and international passenger flights both in Indian and Pakistani air space as well as human life and property on ground."

Sirsa, in India's Haryana state, is a garrison town.

Islamabad on Friday summoned India's Charge d'Affaires to convey "strong condemnation of this blatant violation of Pakistani airspace in contravention of the established international norms and Aviation safety protocols," according to a statement from Ministry of Foreign Affairs.

The incident is unusual because New Delhi test fires missiles in the Bay of Bengal and not on its western borders.

Relations between the two nuclear-armed neighbors have been hostile since both gained independence from British rule in 1947, and Muslim-majority Pakistan was created. Their tensions center on the border region of Kashmir, an area in the Himalayas claimed in full — and ruled in part — by both. They've fought two of their three wars over control of the region.

Violence flares often, as it did in 2019 when a terrorist attack in India led to the most serious military escalation in more than a decade.

A suicide bomber killed 40 Indian paramilitary police in Indian-controlled Kashmir. New Delhi responded with its first airstrikes on Pakistani soil since 1971, which led to an aerial dogfight. Tensions eased when Pakistan returned a captured Indian pilot.

"At 6:43 p.m., a high-speed flying object was picked up inside the Indian territory by the Air Defense Operation Center of the Pakistan Air Force," Iftikhar said. "From its initial course, the object suddenly maneuvered towards the Pakistani territory and violated Pakistan's airspace ultimately falling near Mian Channu at 6:50 p.m."

New Delhi and Islamabad have an agreement in place to notify each other ahead of flight tests of ballistic missiles and military exercises.