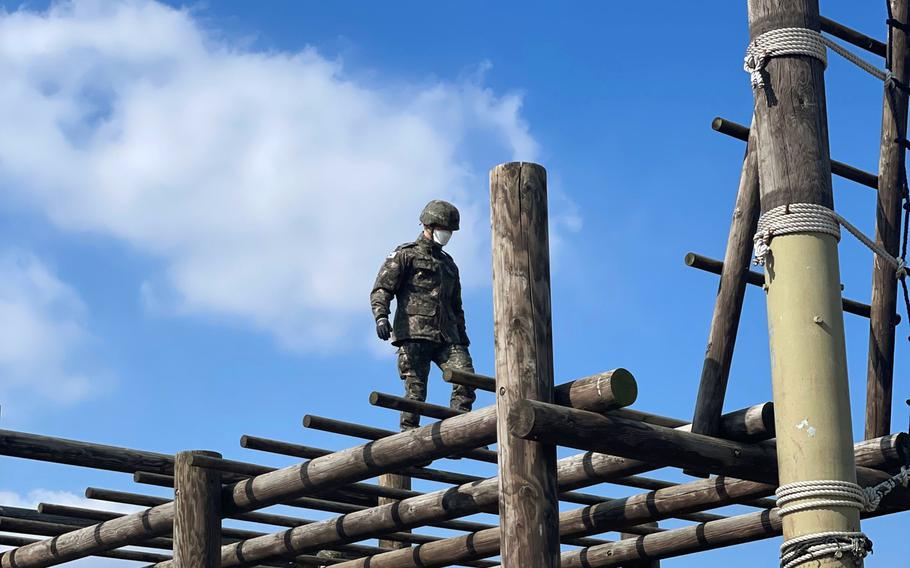 CAMP HUMPHREYS, South Korea – Military trainers from the 2nd Infantry Division helped cadets of the Korean Military Academy hone their skills over three days recently as they prepare for a global competition in April.

Obstacle courses, weapons systems, and combat casualty care – not exactly Olympic events, but the South Korean cadets will test their mettle against their peers when they take the field during the Sandhurst Military Skills Competition at the U.S. Military Academy in West Point, N.Y.

The annual event, limited to U.S. military competitors only in 2021, will admit international cadets again after a two-year absence. The event was canceled altogether in 2020, according to the West Point website.

First-year cadet Suhae Jang, one of 10 preparing for the event, was present for water survival training at the Vandal Training Center pool on Feb. 15.

Cadets sharpened their skills on everything from proper swimming techniques to water rescue.

“I have always been pretty confident in my swimming skills, but the Army water survival training took it to another level for us,” Jang said. “It was a good opportunity for me to try not to panic and prepare me for what I'm going to be doing in the Sandhurst competition.” 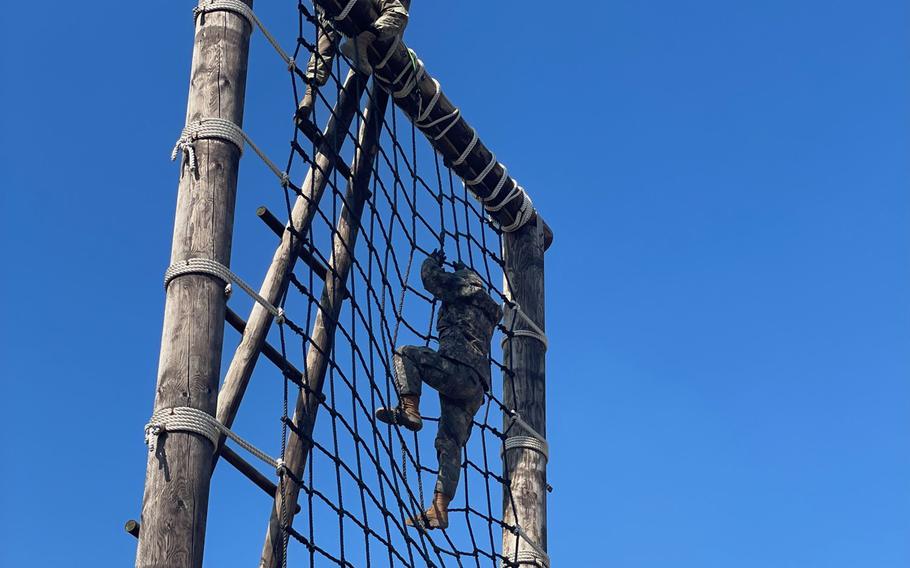 The Sandhurst competition began in 1967 when Royal Military Academy Sandhurst, the U.K. academy, presented a British officer’s sword to West Point “to use as the prize for a competition to promote military excellence,” according to the West Point website.

The competition evolved from there to include competitors from other U.S. military academies, ROTC detachments and up to 14 teams from 12 other countries, according to West Point.

“The Sandhurst competition teaches cadets the mental and physical toughness, the relentlessness and the discipline that’s necessary to work as a team to accomplish the mission,” West Point Superintendent Lt. Gen. Darryl Williams said during the 2021 Sandhurst event, according to the academy website.

“It also strengthens relationships with our allies and partners to foster multi-national cohesion and interoperability while showcasing the tenacity and grit of future military leaders from across the world,” he said.

Interoperability is a term the military uses to describe the ability of a country’s armed forces to use another country’s training methods and military equipment.

The team from the Korean Military Academy has been preparing for the competition since September.

On day two of training, Feb. 16, the cadets stood before an eight-lane obstacle course at Camp Humphreys.

“Familiarizing the cadets with each lane and the proper way to execute each station was the main priority for the day,” said Master Sgt. Dimas Magundayao, the 2nd ID noncommissioned officer in charge of competition training.

“They picked up on everything so fast and I was impressed with the improvement from start to finish,” he said.

On Feb. 17, day three of training, the cadets were familiarized with weapons systems, radio communications and tactical combat casualty care.

“I think it's definitely been mentally and physically challenging,” Jang said.

“But I can see that I'm growing, but I still have room for lots of growth. So, I think it's both enjoyable and challenging at the same time and I look forward to competing in April.”