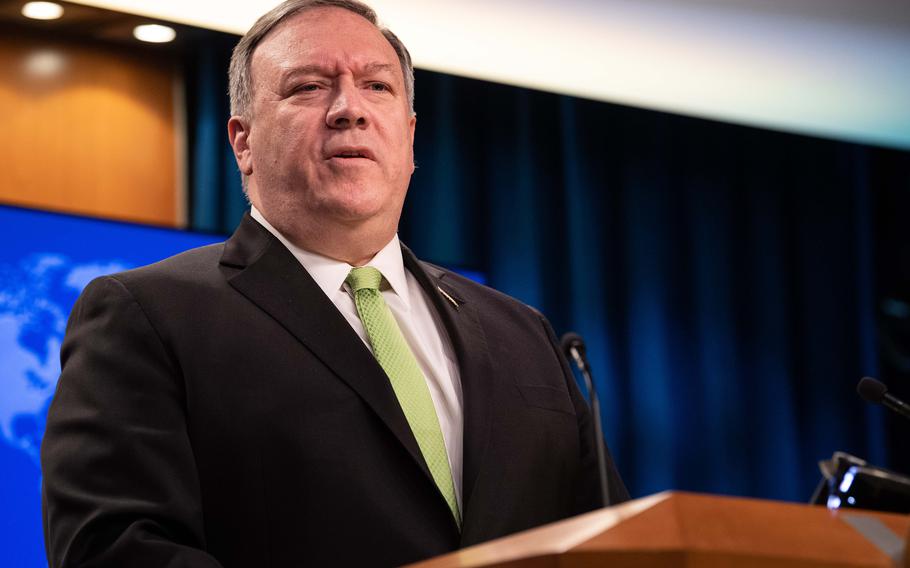 Then-Secretary of State Mike Pompeo speaks to the press at the State Department in Washington, D.C., on May 20, 2020. (NICHOLAS KAMM, AFP via Getty Images/TNS)

(Tribune News Service) — Former Secretary of State Michael Pompeo is scheduled to travel to Taiwan next month, one of the most senior U.S. dignitaries to visit the democratically ruled island in recent years.

Pompeo will meet with President Tsai Ing-wen on March 3, the Liberty Times reported. The former secretary of state will also meet senior management figures from Taiwan Semiconductor Manufacturing Co. and China Steel Corp., although details of those meetings will remain private, the publication said.

Pompeo, who served as secretary of state under President Donald Trump from April 2018 to January 2021, was one of the administration’s most vocal advocates for a more confrontational policy toward China. That period included visits to Taipei by two Cabinet-level officials, the most senior American delegations since the U.S. switched official ties to Beijing in 1979.

“Pompeo has long been sanctioned by China due to his anti-China actions and deeds,” Chinese Foreign Ministry spokesman Wang Wenbin said at a regular press briefing in Beijing on Monday. “The DPP authorities’ attempts to achieve independence with the help of the U.S. will only end up getting themselves burnt.”

The visit comes as Pompeo’s name circulates as a potential contender for the Republican nomination in 2024, a bid that could be complicated by any comeback attempt by Trump. Pompeo is currently a distinguished fellow at the conservative Hudson Institute.

In the final days of Pompeo’s tenure, the State Department scrapped decades-old restrictions on how U.S. diplomats could interact with their Taiwanese counterparts. Pompeo will be joined by Miles Yu, his former policy adviser, the Liberty Times said.