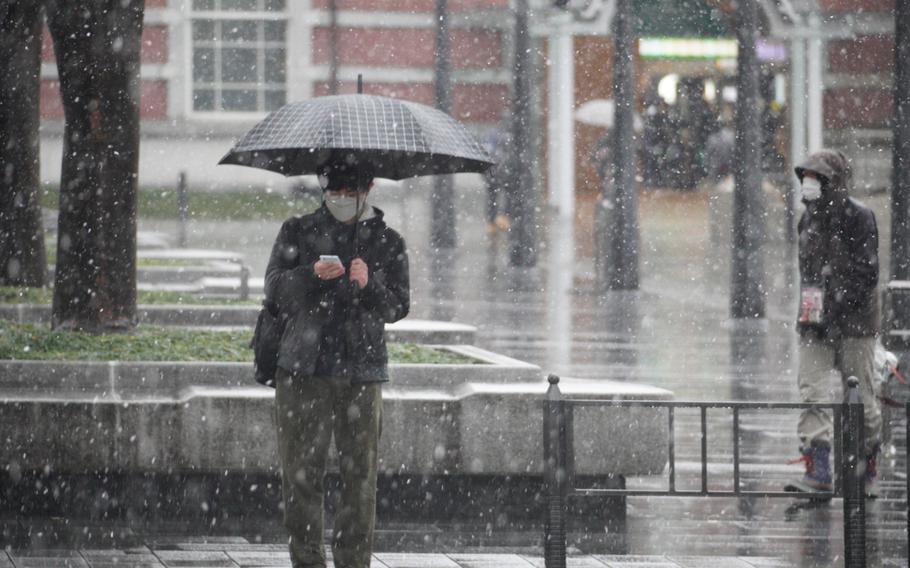 A man wears a mask while checking his phone outside Tokyo Station, Thursday, Feb. 10, 2022. (Akifumi Ishikawa/Stars and Strip)

TOKYO — The central government of Japan plans to extend by three weeks a public health emergency that covers Tokyo and 12 other prefectures due to COVID-19’s continuing spread throughout the country.

Prime Minister Fumio Kishida was expected Thursday evening to push the quasi-emergency end date to March 6 at the request of prefectural governors, according to Kyodo News. The emergency covers Tokyo, the surrounding prefectures of Kanagawa, Chiba and Saitama and nine others, and was set to expire Sunday.

Under the quasi-emergency, first declared Jan. 19, the prefectures may ask bars and restaurants to close early and refrain from selling alcohol. Individuals are asked to avoid unnecessary travel and remain within the prefecture where they live.

The omicron variant, although less virulent but more easily spread than previous forms of the coronavirus, is driving record infection numbers. Japan confirmed more than 90,000 new cases each day between Feb. 1 and Tuesday, according to data from the Johns Hopkins Coronavirus Resource Center. More than 79% of Japan’s population was fully vaccinated as of Thursday.

Tokyo reported another 18,891 people tested positive Thursday, 1,700 fewer than a week ago, according to public broadcaster NHK. The city by Wednesday was confirming another 18,105 new cases, on average, each day, according to metropolitan government data. U.S. Forces Japan, the overall authority for about 55,000 service members in Japan, had not updated its daily report of new military cases by 7 p.m. Thursday. The command reported 108 new cases on Wednesday.

Separately, Marine Corps Air Station Iwakuni, south of Hiroshima, on Thursday confirmed another 10 cases from the previous day for a total 33 since Jan. 4, according to air station news releases.

Kadena Air Base on Okinawa had 86 active cases Thursday, according to its daily website update. That number has fallen steadily from 307 on Feb. 1.

Okinawa prefecture reported 699 new cases Thursday, and 55 from the U.S. military population, according to the prefectural Department of Public Health and Medical Care. COVID-19 cases have risen steadily on the island prefecture from 316 on Monday.

Stars and Stripes reporters Mari Higa and Alex Wilson contributed to this report.