Putin heads to China to bolster ties amid Ukraine tensions 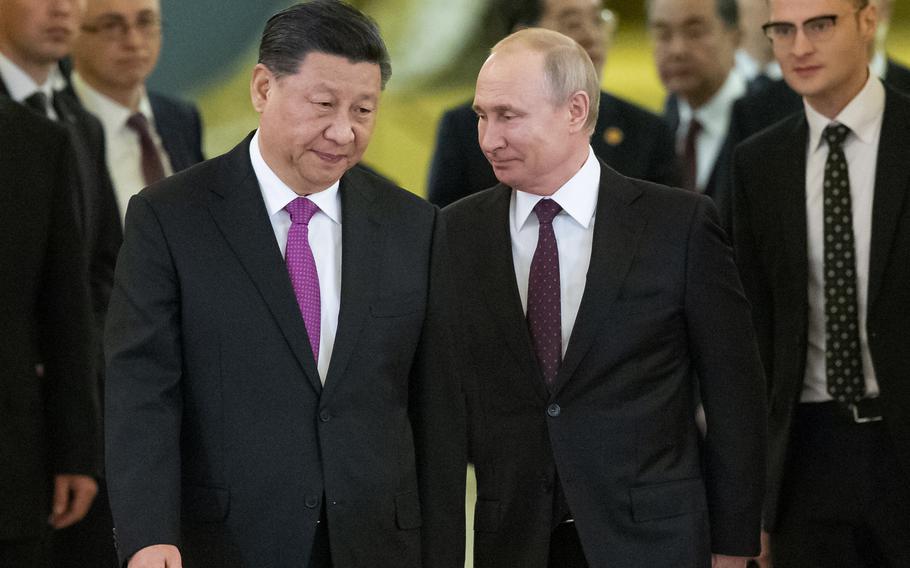 Chinese President Xi Jinping, left, and Russian President Vladimir Putin enter a hall for talks in the Kremlin in Moscow, Russia, June 5, 2019. According to reports on Thursday, Feb. 3, 2022, Putin is heading to Beijing on a trip intended to help strengthen Russia’s ties with China and coordinate their policies amid Western pressure. (Alexander Zemlianichenko, Pool /AP)

MOSCOW — American and European officials may be staying away from the Beijing Winter Olympics because of human rights concerns, but Russian President Vladimir Putin will be on hand even as tensions soar over his buildup of troops along his country's border with Ukraine.

Putin's talks with Chinese President Xi Jinping on Friday will mark their first in-person meeting since 2019 and are intended to help strengthen Moscow's ties with China and coordinate their policies in the face of Western pressure. After, the two will attend the Games' opening ceremony.

The Russian president criticized "attempts by some countries to politicize sports to the benefit of their ambitions," an apparent reference to a diplomatic boycott of the Olympics by the U.S. and some of its allies.

EU spokeswoman Nabila Massrali reacted to that by stating that "we are, of course, fully committed to contribute to promoting and protecting sports integrity and to strengthening universal respect for human rights."

"Big sports events such as the Olympic Games often have a universal audience," Massrali said. "They can be instrumental for spreading positive values and promoting freedom and human rights at the global level. However, such platforms should not be used for political propaganda."

Many Western officials are skipping the Beijing Games in protest of China's detention of more than 1 million Uyghur Muslims in the northwestern region of Xinjiang. But leaders of the ex-Soviet Central Asian nations, which have close ties with both Russia and China, all followed Putin's lead and attending.

In an interview with China Media Group also released Thursday, Putin emphasized that "we oppose the attempts to politicize sport or use it as a tool of coercion, unfair competition and discrimination."

Putin's meeting with Xi and attendance at the opening ceremony "announces the further promotion of the China-Russia relationship," said Li Xin, director of the Institute of European and Asian Studies at Shanghai's University of Political Science and Law.

China and Russia have increasingly found common cause over what they believe is a U.S. disregard for their territorial and security concerns, Li said. Both their governments have also taken to mocking the U.S. over its domestic travails, from last year's Capitol riot to its struggle to control COVID-19.

"The U.S. and the Western countries, on the one hand, are exerting pressure against Russia over the issue of Ukraine, and on the other hand, are exerting pressure against China over the issue of Taiwan," Li said, referring to the self-governing island democracy and U.S. ally that China claims as its own territory. "Such acts of extreme pressure by the West will only force China and Russia to further strengthen cooperation."

Yuri Ushakov, Putin's foreign affairs adviser, said that Putin's visit would mark a new stage in the Russia-Chinа partnership that he described as a "key factor contributing to a sustainable global development and helping counter destructive activities by certain countries."

He said that Moscow and Beijing plan to issue a joint statement on international relations that will reflect their shared views on global security and other issues, and officials from the two countries are set to sign more than a dozen of agreements on trade, energy and other issues.

Ushakov noted that Moscow and Beijing have close or identical stands on most international issues. He particularly emphasized that China backs Russia in the current standoff over Ukraine.

"Beijing supports Russia's demands for security guarantees and shares a view that security of one state can't be ensured by breaching other county's security," Ushakov said in a conference call with reporters.

"Previously, China avoided such expressions of support for the Russian policies in Eastern Europe," said Vasily Kashin, a China expert with the Higher School of Economics in Moscow. "Now we see more unity."

While Moscow and Beijing will be unlikely to forge a formal defense alliance, "their cooperation will steadily grow," Kashin said.

A buildup of more than 100,000 Russian troops near Ukraine has fueled Western fears that Moscow is poised to invade its neighbor. Russia has denied planning an offensive but urged the U.S. and its allies to provide a binding pledge that NATO won't expand to Ukraine and other ex-Soviet nations or deploy weapons there and roll back its forces from Eastern Europe — the demands firmly rejected by the West.

Some observers suggested that Beijing is closely watching how the U.S. and its allies act in the standoff over Ukraine as it ponders further strategy on Taiwan, arguing that indecision by Washington could encourage China to grow more assertive.

Putin on Tuesday accused the U.S. and its allies of stonewalling Russia's security demands but held the door open for more talks. He argued that NATO's expansion eastward and a potential offer of membership to Ukraine undermine Russia's security and violate international agreements endorsing "the indivisibility of security," a principle meaning that the security of one nation shouldn't be strengthened at the expense of others.

The Russian leader has warned that if the West refuses to heed Russian demands, he could order unspecified "military-technical moves." Other than a full-fledged invasion in Ukraine that the West fears, Putin could ponder other escalatory options, including beefing up already extensive military ties with China.

Russia and China have held a series of joint war games, including naval drills and patrols by long-range bombers over the Sea of Japan and the East China Sea. In August, Russian troops for the first time deployed to Chinese territory for joint maneuvers.

Even though Moscow and Beijing in the past rejected the possibility of forging a military alliance, Putin has said that such a prospect can't be ruled out. He also has noted that Russia has been sharing highly sensitive military technologies with China that helped significantly bolster its defense capability.

Raf Casert in Brussels, and Dmitry Osipov in Moscow, contributed to this report.