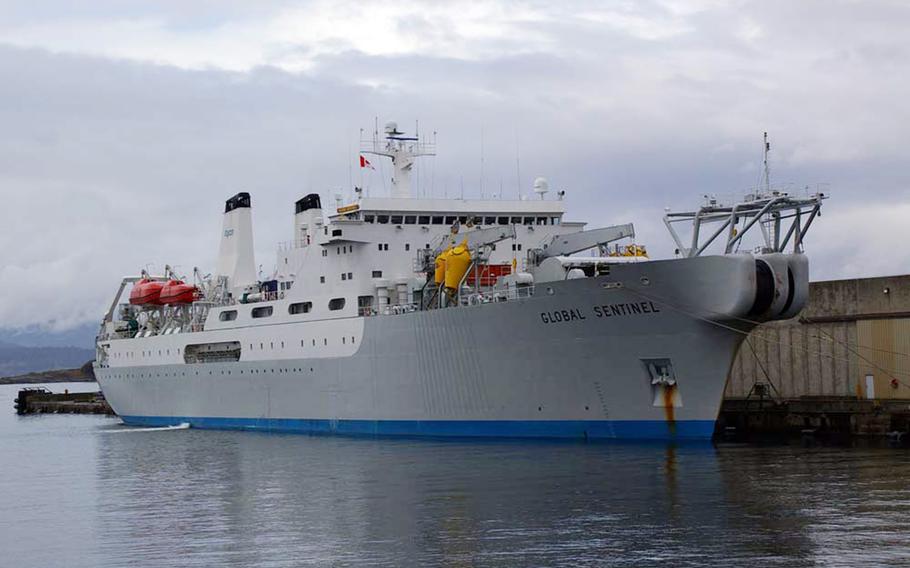 The CS Global Sentinel has laid undersea cable all over the world, including work on the Trans Pacific Cable in 1990. (Leslie Lewis)

A Maryland-based company has been awarded a $38.8 million Navy contract to lay and repair transoceanic cables that carry information — vital and mundane — for the U.S. Defense Department.

The Navy gave the contract to the Transoceanic Cable Ship Co. LLC of Baltimore, for work on submarine cables around the world, the Pentagon announced in a news release Jan. 18. This agreement is an option in an underlying contract with Transoceanic from 2018.

The contract may be extended up to three years and 11 months, making it worth as much as $205 million, according to the announcement. Work is expected to be complete by Dec. 22, 2023.

Under the contract terms, Transoceanic will do the work with the cable-laying vessel CS Global Sentinel. The 31-year-old ship is the property of oceanic cable company Tyco Telecommunication of Morristown, N.J., and is based in Baltimore, according to Nauticapedia.com. The vessel has laid cable all over the world, including work on the Trans Pacific Cable in 1990.

A representative for Transoceanic Cable Ship did not return emails sent Monday by Stars and Stripes seeking further information.

“Commercial undersea cable communications carry over 97% of all intercontinental electronic communications, facilitating the reach and speed of internet and phone access critical to international trade, official government communications, and daily end user requirements,” said a 2017 report by the Director of National Intelligence and the Department of Homeland Security.

For the DOD, transoceanic cables are an important part of the Global Information Grid, the network that provides information on demand to warfighters, policy makers, and support personnel, and they play a role in the DOD’s ability to wage digital war on the internet, according to a 2010 report for Homeland Security by Michael Sechrist of the Harvard Kennedy School.

“Nearly all government traffic, including sensitive diplomatic and military orders, travels these cables to reach officials in the field,” according to his report.

Although undersea cables could be targeted by adversaries in a future conflict, the most common threat today is accidental physical damage from commercial fishing and shipping, or even from underwater earthquakes, according to a Center for Strategic and International Studies report in June by Pierre Morcos and Colin Wall. Those factors are responsible for about 150 to 200 subsea cable faults every year, they wrote.

It can be a heavy blow to the DOD if the cables are damaged, Sechrist said. The department lost 60% of its commercial and military connectivity due to cable breaks in December 2008. One result was a significant loss in video footage recorded by military drones and transmitted via undersea cable.

“This resulted in a decline in Unmanned Aerial Vehicle flights, also known as drones,” Sechrist wrote, “which dropped from in the hundreds to the tens during the cable breaks.”