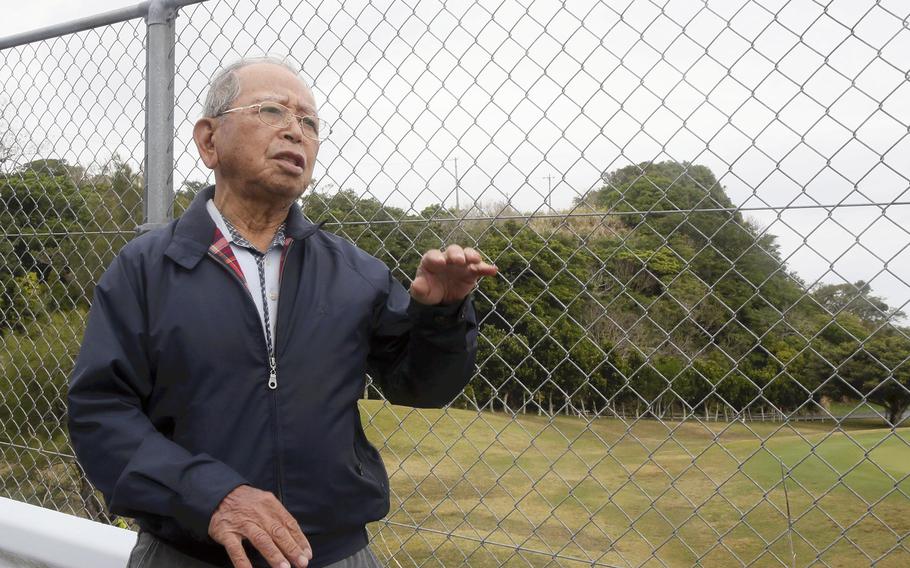 Tokusuke Serikyaku talks about his time working at the U.S. military base named Camp Chinen, which is now the golf course behind him, in Nanjo, Okinawa Prefecture, on Jan. 6. (Japan News-Yomiuri)

With its beautiful green grass and views overlooking the clear blue ocean, a picturesque golf course stretches out over some high ground in what is now the city of Nanjo near the southern tip of Okinawa Prefecture’s main island. But until the United States returned this land two years after the prefecture reverted to Japanese control, this course in what was then the town of Tamagusuku had been the site of Camp Chinen -- a U.S. military base.

The return of this land was part of the drive to reorganize and reduce U.S. bases in accordance with Okinawa’s reversion to Japan. Spurred in part by the deteriorating U.S. financial situation, the U.S. military announced on Dec. 4, 1969 -- just 13 days after the Japanese and U.S. governments had agreed Okinawa would be returned -- that about 2,400 workers at U.S. bases in Okinawa would be laid off.

More employees were dismissed over the following months with the purpose of cutting expenses, even while the bases’ functions were maintained. Some base workers even staged a strike to protest against the job cuts. In the end, a total of about 7,000 workers had lost their jobs by the time Okinawa was returned to Japan in May 1972.

Tokusuke Serikyaku, who had been working at Camp Chinen, still remembers feeling at a loss when the decision to return the base was made in 1971. “I wondered how I’d be able to make ends meet,” recalled 86-year-old Serikyaku, who lives in Nanjo.

At the time, Serikyaku’s monthly salary had been about 120,000 yen. An acquaintance helped Serikyaku find a job at the village government office, but his salary plunged to about 60,000 yen. With four children to raise, Serikyaku’s wife and mother also started working part-time.

Serikyaku was 10 when the Battle of Okinawa was fought. He escaped the bombardment of the island by U.S. warships -- an assault that local residents called an “iron storm.” His grandfather died after contracting malaria in a civilian internment camp run by the U.S. military.

“I hated the United States for making Okinawa suffer so much,” Serikyaku said. “But the only jobs here were in agriculture, and I couldn’t earn enough money that way.”

With few options available, Serikyaku decided to seek work at Camp Chinen, the biggest source of jobs in the area.

Working at the base was tough for someone who had seen the Battle of Okinawa firsthand. The bases were staging areas for shipping supplies to U.S. military units that conducted missions during the Vietnam War, and rifles were repaired there and sent to the front line.

“I constantly asked myself if I was being complicit in that war,” Serikyaku said. “But I had no other choice to maintain my living.”

At the time, Okinawa lacked any industries that could soak up the vast number of workers laid off by the U.S. military. For many residents, the reversion to Japan was a time of uncertainty and discontent.

Seikou Yogi, 76, was in charge of human resources at an organization that operated a supermarket and other facilities inside the bases. He had to translate the notices of dismissal and tell workers they were being laid off. Many of the workers became hostile toward Yogi because they felt he “was on the U.S. military’s side.” Posters slandering Yogi were even posted on walls near his home.

Many of the Americans at the supermarket looked down on the workers and barked instructions at them. Some workers who were not laid off became fed up after Okinawa’s reversion and quit with a promise “never to set foot on the base again.” However, the difficulty of finding good jobs and the meager salaries outside the bases were often too much to bear, and many eventually returned and asked to be rehired at the military facilities.

The U.S. bases remain a major source of employment in Okinawa Prefecture. Although the number of workers at these bases has dropped from about 19,000 at the time of Okinawa’s reversion to about 9,000 now, this figure is still almost double the number of employees at the prefectural government.

According to recruitment information from the Labor Management Organization for U.S. Forces in Japan Employees, an incorporated administrative agency that hires and handles administrative matters for employees at U.S. bases, basic monthly salaries range from 163,200 yen to 248,200 yen. This compares favorably with the 182,200 yen starting salary for a new university graduate at the prefectural government.

Competition for the about 260 to 640 jobs that become available at the bases annually is intense, with applicants outnumbering vacancies by about 10 to one.

A vocational school in Naha previously offered a course titled “specialization for on-base employment.” The name has since been changed, partly because public opinion regarding the bases is split in Okinawa, but even today, students undergo training at restaurants inside the bases and one or two land jobs there each year. Okinawa Prefecture’s tourism industry has been battered by the novel coronavirus pandemic, which fueled a jump in people wishing to work at bases during the 2021 academic year. A record-high seven students from the school have found permanent full-time jobs at bases during this school year.

Jun Inafuku, a teacher at the school, has mixed feelings about the bases.

“The bases are here, and there’s been no end to accidents and incidents involving them, so that presents a dilemma,” said Inafuku, 53. “But if there were no bases, I don’t know where those workers could find other jobs.”