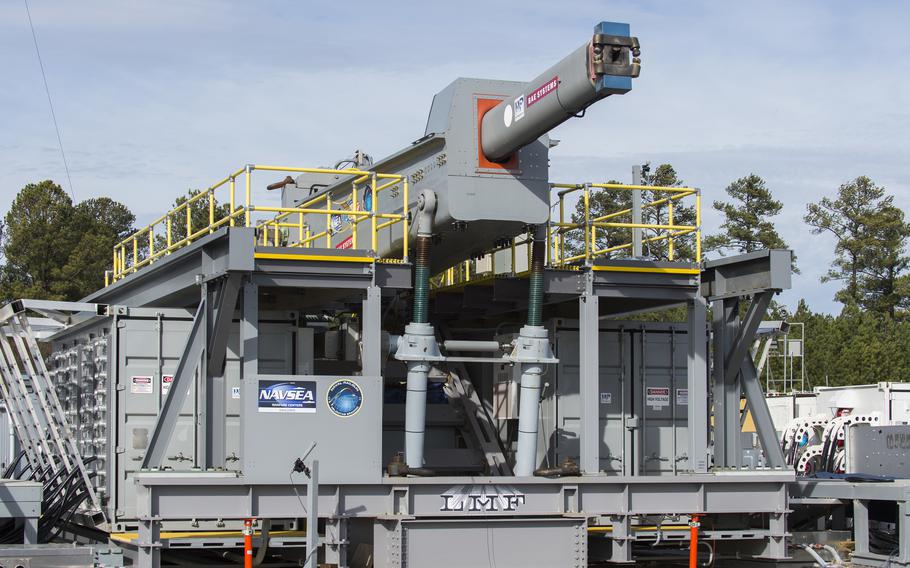 An electromagnetic railgun is pictured in January 2017 at the Naval Surface Warfare Center in Dahlgren, Va. (John Williams/U.S. Navy)

TOKYO – Japan is pushing ahead with efforts to field an electrically powered railgun capable of firing projectiles six times the speed of sound and defending against hypersonic missiles.

The railgun project was allocated about $56 million in the government's fiscal 2022 budget proposal, Japan’s The Mainichi newspaper reported Jan. 5.

A railgun uses an electromagnetic force to rapidly accelerate and launch a projectile between two rails, according to Naval Sea Systems Command.

Firing a railgun costs a lot less than launching a missile; however, power consumption, mobility and cooling are major challenges to developing such a weapon, according to Riki Ellison, chairman of the nonprofit Missile Defense Advocacy Alliance.

“Even we (the United States) don't have it fully developed and proven to be operationally deployed,” he told Stars and Stripes in an email last week.

The Navy spent a decade and $500 million developing railgun technology before abandoning its efforts last summer to concentrate on hypersonic missiles, Voice of America reported July 7.

Japan has already built a prototype and aims for a weapon that can fire a projectile at 6,562 feet per second or more, which is about Mach 6, according to the Mainichi report.

“We plan to genuinely engage in research of railguns, which could deal with missiles, such as hypersonic missiles,” an official from the Ministry of Defense’s Acquisition, Technology and Logistics Agency told Stars and Stripes in an email Jan. 14. Japanese government officials typically request anonymity when speaking to the press.

The United States, China and Russia have tested hypersonic missiles, which travel at speeds faster than Mach 5. North Korea also claims to have tested them.

“Railguns are an important project for the defense of our country [and] could be utilized for … missile defense and anti-ship attacks,” the Defense Ministry official said.

Railguns are expected to vastly improve on the distance and power of conventional guns, he added.

Japan has been researching railguns since 2016 and has increased the speed of projectiles and developed materials capable of conducting the strong electric current required, the official said.

During Japan’s next fiscal year, which begins in April, researchers will develop technology for stable projectile flight and automatic firing. The railgun research is scheduled to continue until 2028, the official said.

“Although we aim for early practical application of railguns, it is hard to say at this point when it will be in use,” he said.

Railgun technology is much less developed than missiles, with which nations and defense contractors are comfortable and competent, according to Arizona State University engineering professor Braden Allenby.

“At some point, railguns might offer more effective firepower for less money than missiles, but that day isn’t here yet,” he said in an email Tuesday.

It’s a reasonable strategy for most powers to choose to deploy missiles in the short term, especially if under immediate threat, and invest in railguns for the longer term depending on their other responsibilities, Allenby said.