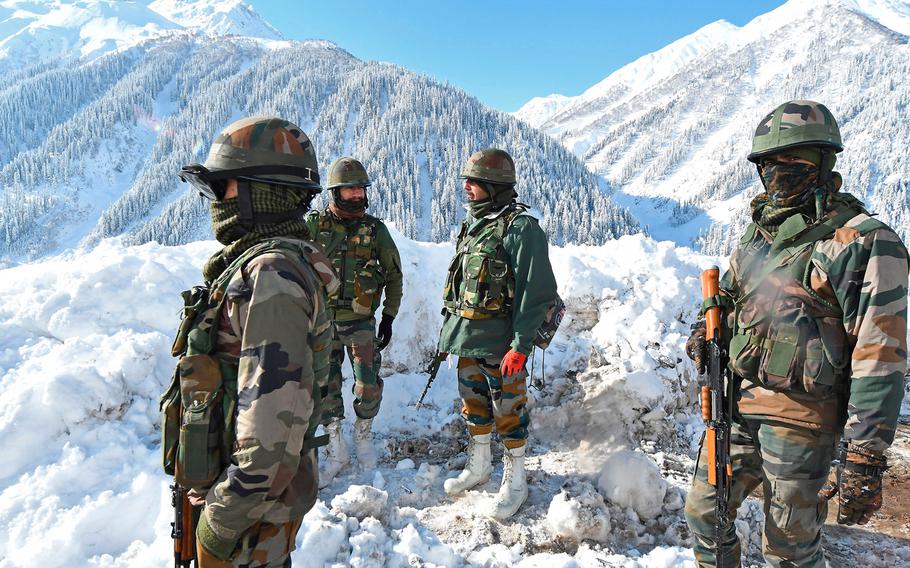 In this photo from Feb. 28, 2021, Indian army soldiers stand on a snow-covered road near Zojila mountain pass that connects Srinagar to the union territory of Ladakh, bordering China. (TAUSEEF MUSTAFA/TNS)

NEW DELHI — China’s aggression along the border persists and has by no means reduced, India’s Army Chief M.M. Naravane said Wednesday, even as military officers from both sides were discussing ways to resolve an ongoing frontier dispute between the two nuclear-armed neighbors.

The country’s 1.3 million-strong army continues to maintain a “high level of preparedness” along the northern border, Naravane told reporters in New Delhi, adding that ongoing military commander-level talks showed both sides were willing to resolve their differences through a dialog.

India and China share a 3,488 km (2,170 miles) long, unmarked Himalayan border where both have amassed thousands of troops, tanks and artillery guns over the last 18 months. The tensions hit their highest point in four decades in June 2020 when clashes left 20 Indian soldiers and at least four Chinese soldiers dead.

He described the pullback of troops from some of the friction points on the border last year as “positive steps.”

Separately, the army chief said New Delhi was “not averse” to withdrawing troops from the Siachen Glacier — often described as the world’s highest battle field — where Indian and Pakistan soldiers remain within rifle range of each other, provided Islamabad is ready to uphold previous agreements and verify the ground positions of troops on a map.

India and Pakistan both claim the environmentally fragile region. Both countries have lost hundreds of soldiers to harsh weather conditions since 1984 when both sides rushed troops to capture the glacier.