US military on Guam sees record number of COVID-19 cases, though most are ‘mild’ 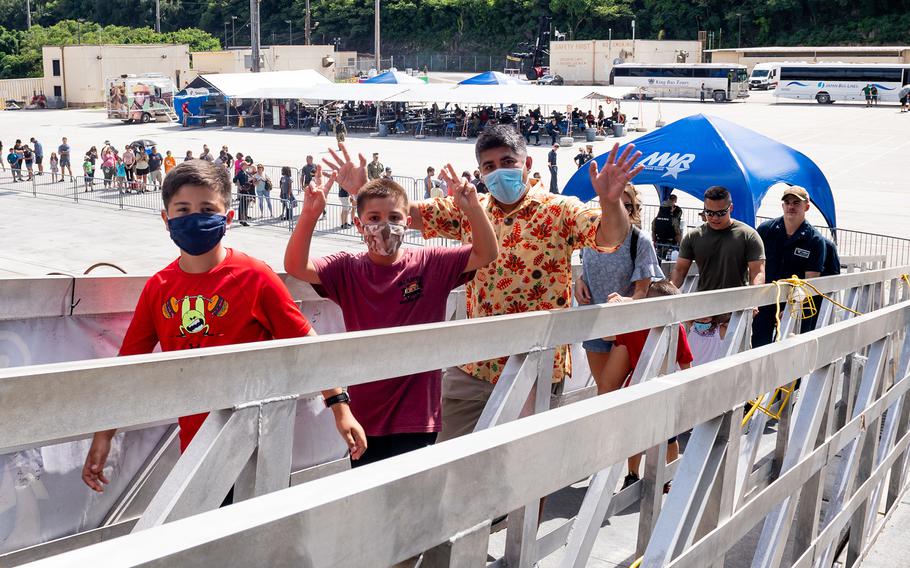 Masked visitors are escorted aboard the aircraft carrier USS Carl Vinson for a tour during a port visit to Naval Base Guam, Nov. 13, 2021. (Aaron Smith/U.S. Navy)

Cases of COVID-19 in Guam’s military community have nearly doubled in less than a week, though the majority are “mild” or have no symptoms at all, a spokeswoman for the military command on the U.S. territory said Wednesday.

“There have been no new hospitalizations,” Koenig said. No new restrictions or policy changes are planned for the time being, she added.

Guam itself is seeing a record number of new COVID-19 cases but hospitalizations remain low, and symptoms thus far are mild, Gov. Lou Leon Guerrero said during an address uploaded Tuesday to YouTube.

The island’s Joint Information Center reported 516 new cases on Wednesday, along with 17 hospitalizations. The island community has 2,553 active cases, according to the information center.

“Our focus remains on preventing severe illness, preventing increased hospitalization and saving lives,” Guerrero said in her address. Protective measures like mask mandates, testing, vaccinations, boosters and monoclonal antibody treatments have, thus far, been effective so no new restrictions are planned at this time.

“I am asking everyone to stay the course,” she said.

The Joint Information Center on Tuesday reported one death linked to COVID-19, the 273rd on the island. A partially vaccinated 90-year-old male with underlying health conditions died Jan. 5 at U.S. Naval Hospital after testing positive Dec. 27.

The Marine Corps on Tuesday postponed the reactivation ceremony for Camp Blaz in Dededo, base spokesman Anthony Ramos said in a statement provided by Marine Corps Installations Pacific. The ceremony to rename the former Marine Barracks Guam after the late Brig. Gen. Vicente “Ben” Tomas Garrido Blaz had been planned for Jan. 27.

Guam remains under a mask mandate, Guerrero spokeswoman Krystal Paco-San Agustin told Stars and Stripes by email Wednesday. Social gatherings are limited to 25 indoors and 100 out. Proof of vaccination is required before entering restaurants, bars and gyms.

The only change coming is increased outreach for testing and vaccinations, Paco-San Agustin said. Testing has been ramped up to six hours a day, six days a week, by appointment and after-school vaccination clinics are open around the island to target families.

Koenig encouraged all “eligible beneficiaries” to get a COVID-19 vaccine booster.