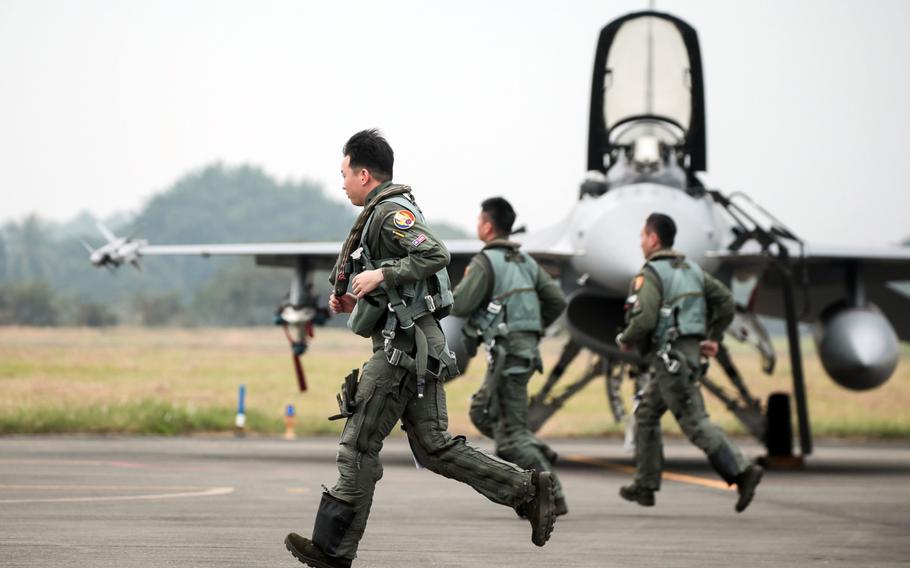 Taiwan found debris near the area where one of its most advanced fighter jets went missing, as the search for the pilot and his aircraft stretched into a second day.

The wreckage was found Wednesday close to where the F-16V disappeared during a training exercise, Taiwan’s National Rescue Command Center said in a text message. It is the first sign the search has zeroed-in on the location of the incident.

The air force has halted all drills and training exercises for F-16V jets after the aircraft vanished from radar screens about half an hour after it took off from Chiayi Air Base just before 3 p.m. Tuesday. Taiwanese President Tsai Ing-wen has ordered the military and emergency services to treat the rescue operation as their top priority.

The jet was one of 64 Lockheed Martin Corp. F-16Vs that Taiwan brought into service in November as part of a $3.9 billion U.S.-backed program to beef up its aging fleet. Military experts pointed to the stresses on the air force posed by daily flights by Chinese military aircraft into Taiwan’s air defense identification zone and a resulting decline in training time.

“Taiwan’s Air Force should address the issue that training time for pilots are severely compressed due to frequent Chinese incursions,” former Air Force Lieutenant General Chang Yan-ting told the Taipei-based Liberty Times. “The pilot of the missing jet only flew an F-16 for a little over 60 hours since March 2020. That’s just one-third of the time he would have been given under normal circumstances.”

The plane fell into the sea when conducting a shooting drill, Inspector-General Liu Hui-chien told a briefing Tuesday in Taipei. While the pilot wasn’t seen ejecting, the air force hasn’t ruled out the possibility he survived. The military has established a response center to coordinate search and recovery operations with the assistance of the coast guard and police.

Tuesday’s disappearance is the latest in a series of military aviation accidents in recent years, renewing worries about the island’s outdated defense hardware. It comes as Taiwan scrambles more jets to fend off incursions from China, which considers the island part of its territory, even though it has never controlled it.

Taiwan grounded all military airplanes in March after a mid-air collision of two F-5 jets that left one pilot dead and another missing. An F-16 was lost off the east coast minutes after taking off from a base in Hualien in November 2020 and has yet to be found. Taiwan’s top uniformed military officer was among eight passengers who died when their UH-60M Black Hawk helicopter made an emergency landing in a mountainous area south of Taipei city in January 2020.