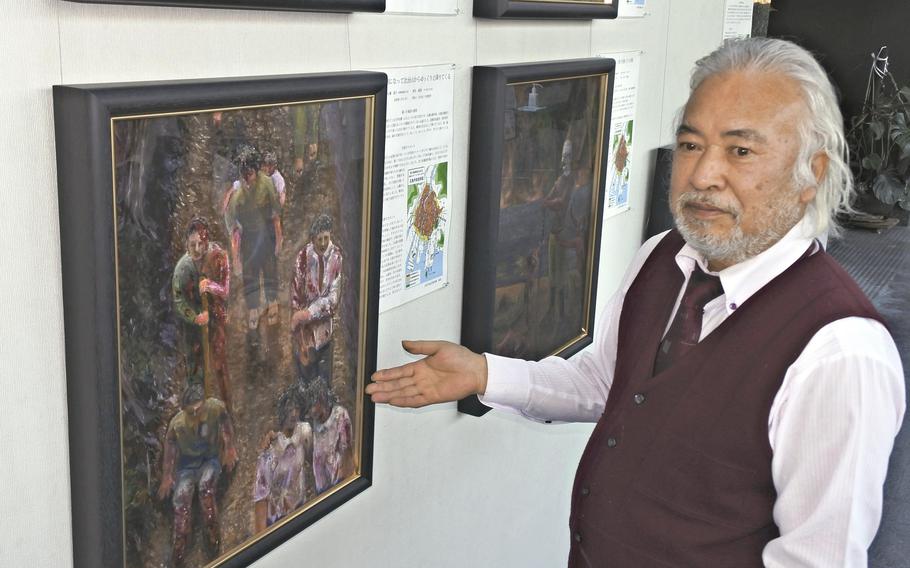 HIROSHIMA, Japan — An exhibition featuring artwork inspired by the experiences of hibakusha atomic bomb survivors by Hiroshima City high school students is being held at the United Nations Headquarters in New York.

The exhibition was to coincide with the Nuclear Non-Proliferation Treaty Review Conference scheduled to start Tuesday. However, the conference was postponed because of the pandemic. Still, those involved hope the exhibition will allow people to "know how atomic bomb survivors feel, and encourage the world to steadily pursue a path toward nuclear disarmament."

The exhibition showcases works created by students of Hiroshima Municipal Motomachi High School, which lost 369 students and teachers when the atomic bomb was dropped in 1945. The high school began an annual project about 15 years ago in which art students spend almost an entire year creating pieces that depict the devastation described by hibakusha.

So far, 148 students have created 171 pieces of art, using oil paints, pastels and other mediums, based on the experiences of 46 survivors.

Many students have a difficult time on the project as they can't visualize "severely burned skin" or "wounds infested with maggots." Some students end up speaking to a survivor more than 20 times to get a better understanding.

Many pieces created for the project depict gruesome scenes, resulting in some backlash over making high school students draw such images.

But Kazunuki Hashimoto, 62, an art teacher at the school, said, "It is meaningful for the students to have to earnestly face hibakusha and think about peace and war."

This is the first time the works are being displayed at the United Nations. Nine pieces are on display, along with an explanation in English on a monitor set up in the lobby.

Among them, "Senko" (Flash) was painted by Hiroshima City high school alumna Minami Ogawa, 23, who currently works as a curator at Himeji City Museum of Art in Hyogo Prefecture. Ogawa participated in the project while in high school and depicted a scene of the moment the atomic bomb exploded, based on the experiences of Sadae Kasaoka, 89. Kasaoka was 12 years old when she witnessed the explosion from her home, which was 3.5 kilometers away from the epicenter.

Ogawa used bright orange to express the heat. She also drew the glass that shattered in the explosion. She asked her teacher to smash a sheet of glass and took note of how the pieces scattered. With Kasaoka beside her, Ogawa painted over her work many times to re-create the scene.

"Even using words to describe the scene is so difficult," Kasaoka said to Ogawa. "Despite that, you managed to re-create it, and I'm so grateful."

Ogawa said: "As I listened to hibakusha talk about their life and experiences, I felt the deep psychological scars left behind by the ravages of war. That was when I realized that I knew nothing."

Although the NPT review conference was postponed, she hopes many visitors to the United Nations will see the exhibition.