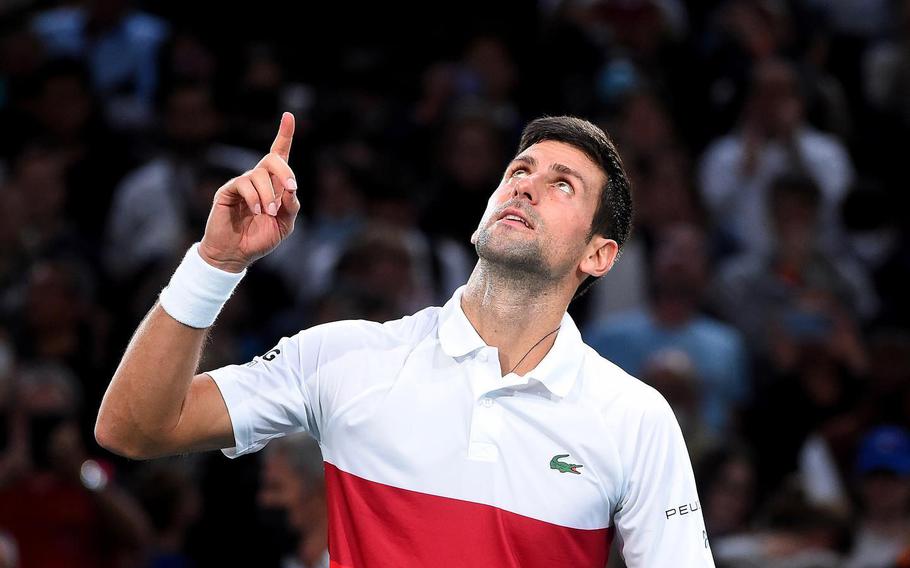 Serbian tennis star Novak Djokovic looks up during a match in Paris, France, as seen in a Nov. 7, 2021, post. (Facebook)

Tennis star Novak Djokovic's lawyers said Saturday that he had received a letter from Australia's immigration authorities days before his visa was canceled upon arrival in Melbourne stating that he met "the requirements for a quarantine-free" entrance into the country despite his unvaccinated status, according to court documents released Saturday.

Ahead of a hearing on Monday to decide whether Djokovic will be allowed entry to defend his Australian Open title, his legal team told the Federal Circuit and Family Court that the player had tested positive for the coronavirus on Dec. 16 - which he relied on for a medical exemption to vaccination granted by Tennis Australia, the major tournament's governing body.

He then got the letter from Australia's Department of Home Affairs on Jan. 1, the court documents said, and "Mr Djokovic understood that he was entitled to enter Australia and Victoria and to compete in the Australian Tennis Open." A spokesperson for the Australian Border Force told The Washington Post by email on Saturday that the agency would not be commenting as the matter was before the courts.

But when he arrived in Melbourne overnight Wednesday, Djokovic was detained by airport authorities who raised questions about the legitimacy of the medical exemption. They soon canceled his visa, with the Australian Border Force saying in a statement that "Djokovic failed to provide appropriate evidence to meet the entry requirements to Australia."

Tennis Australia and Victoria state officials said Djokovic had been one of a "handful" of people granted medical exemptions and had received no special treatment, with applications being anonymous and reviewed by two independent panels. The federal government, however, is responsible for international borders and visas and did not participate in the process for considering exemptions, officials have said.

"Rules are rules, especially when it comes to our borders. No one is above these rules," Australian Prime Minister Scott Morrison tweeted this week after an uproar over Djokovic's apparent exemption. "Our strong border policies have been critical to Australia having one of the lowest death rates in the world from COVID, we are continuing to be vigilant."

The decision to allow an unvaccinated sports star into the country had drawn fierce backlash as Australia grapples with the fast-spreading omicron variant and one of the world's sharpest spikes in infections.

Djokovic, 34, the world's top-ranked men's tennis player who is hoping to compete this month for a record 21st Grand Slam singles title, has made several skeptical remarks about vaccines since the start of the coronavirus pandemic but had not explicitly disclosed his vaccination status publicly. However, according to the court documents, he told Australian officials he had not been vaccinated while citing the medical exemption from Tennis Australia based on the grounds that he had "recently recovered from COVID-19."

As Djokovic prepares for his appeal of the visa cancellation, he is holed up at the Park Hotel in Melbourne, according to the court documents - a location normally used to house refugees and asylum seekers and for coronavirus quarantine.

His case has sparked a diplomatic spat, as Serbian President Aleksandar Vucic this week decried what he called a "political witch hunt." Djokovic's parents have also spoken out, criticizing Australian authorities for "trying to crucify and belittle Novak and throw him to his knees." Djokovic supporters, meanwhile, have staged candlelight vigils and protests outside the Park Hotel.

Australia has stressed that Djokovic is not a detainee and can leave the country whenever he wants.

"Mr. Djokovic is not being held captive in Australia," Home Affairs Minister Karen Andrews told the Australian Broadcasting Corporation on Friday. "He is free to leave at any time that he chooses to do so, and Border Force will actually facilitate that."

Monday's hearing will be held one week before the tournament's Jan. 17 start.

An upbeat Djokovic posted on Instagram on Tuesday that he was "heading Down Under with an exemption permission. Let's go 2022!!" On Friday, his wife, Jelena Djokovic, thanked fans online for their support and said the couple would "grow from this experience."

Fellow tennis star Rafael Nadal, who is also in Australia ahead of the tournament, struck a less sympathetic note, telling reporters on Thursday that Djokovic knew the risks. "It's normal that the people here in Australia get very frustrated with the case because they have been going through a lot of very hard lockdowns," Nadal said, urging people to get vaccinated.

Czech women's doubles player Renata Voracova also had her visa canceled and was sent to the Park Hotel after entering the Australian tournament on a similar vaccine exemption, Reuters reported, citing a statement from the Czech Foreign Ministry.