Covax vaccine deliveries surge in final stretch of 2021, with a record 300 million doses sent out in December 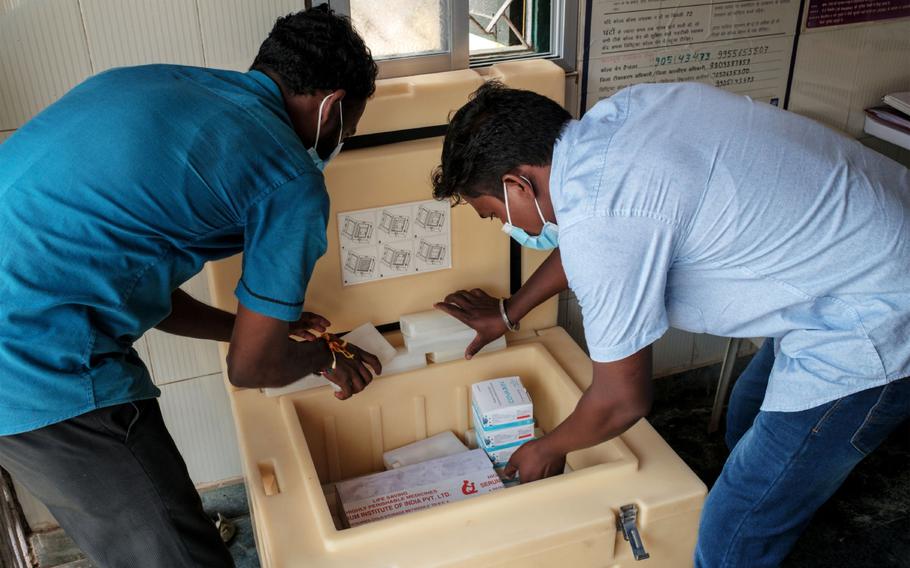 The Covax Facility delivered more than 309 million coronavirus vaccine doses in December, marking a dramatic increase in the delivery rate for a global vaccine-sharing initiative that had struggled for much of 2021 amid a lack of supply and logistical problems.

In total, roughly 910 million doses were delivered through the U.N.-backed initiative as of Dec. 30, according to provisional tracking by UNICEF released to The Washington Post on Friday.

The final tally for the year is far short of the 2 billion-plus doses that Covax initially aimed for, and is leagues below even loftier targets that some activists said it should be aiming for. But with roughly a third of doses delivered in the final month of the year, there are cautious hopes that Covax may have sidestepped some of the problems that plagued it in 2020.

"It brings a tear to the eye," said Olly Cann, director of communications at Gavi, the vaccine alliance, a nonprofit that is one of the three principal backers of the program, along with the World Health Organization and the Coalition for Epidemic Preparedness Innovations.

It marks a bright spot after a tough year for the ambitious vaccine-sharing initiative, which had faced widespread criticism amid missed deadlines and revised targets. Lawrence Gostin, director of the O'Neill Institute for National and Global Health Law at Georgetown University, said there was "no getting around the idea that Covax has been disappointing and underperformed."

But Gostin said the surge in Covax deliveries was a reflection of the changing dynamic of global vaccination efforts. "We're frankly getting toward a world where supply is not going to be as great a challenge as simply delivering the vaccine and getting it into people's arms," he said.

While it is not clear if the surge in deliveries will continue into 2022, officials with Covax said that the accelerated pace was thanks to a variety of positive developments, including increased supply.

One key factor was an increased level of advance notice from donors about when doses would be available, Cann said, which allowed recipient countries to better prepare to distribute and administer them, as many donated doses have short shelf lives. "We don't want to be delivering to countries that aren't able to accept doses," said Cann.

Other large recipients included Indonesia, the Philippines and Pakistan, each of which received at least 25 million doses in December.

Well over half of the doses delivered across the world during the last month of the year came from three U.S.-backed vaccine manufacturers: Johnson &amp; Johnson, Moderna and Pfizer-BioNTech.

Covax was created in the early days of the pandemic, with the formal announcement of its formation in April 2020. The initiative aimed to ensure that low- and lower-middle-income countries had access to doses by asking countries to pool their resources to build a portfolio of doses that would be shared equitably.

But the initiative struggled to raise funding in 2020 and fell behind national governments in placing orders for doses with vaccine manufacturers.

It was further hobbled in April, when the Indian government began to block the exports of vaccine doses produced in the country amid a wave of coronavirus cases there related to the delta variant. The move cut off Covax from a key supplier, the Serum Institute of India, which had been expected to provide as many as 1 billion doses of a vaccine licensed from Oxford University-AstraZeneca.

India resumed exports in November, while vaccine doses purchased from Chinese manufacturers Sinopharm and Sinovac began to be exported in August.

The largest influx of doses, however, came after the United States, the European Union and other wealthy nations began donating doses through Covax in the summer. The vast majority of doses from Johnson &amp; Johnson, Moderna and Pfizer-BioNTech have been donated, leading to concerns that the flow of doses could dry up again if donor nations felt threatened by omicron or other variants.

During a news conference last week, WHO director general Tedros Adhanom Ghebreyesus voiced some optimism about vaccine supply in 2022, but added a note of caution that the boosters being widely administered in many wealthy nations could skew global inequity further.

"Our projections show that supply should be sufficient to vaccinate the entire global adult population and to give boosters to high-risk populations, by the first quarter of 2022," Tedros said on Dec. 22. "However, only later in 2022 will supply be sufficient for extensive use of boosters in all adults."