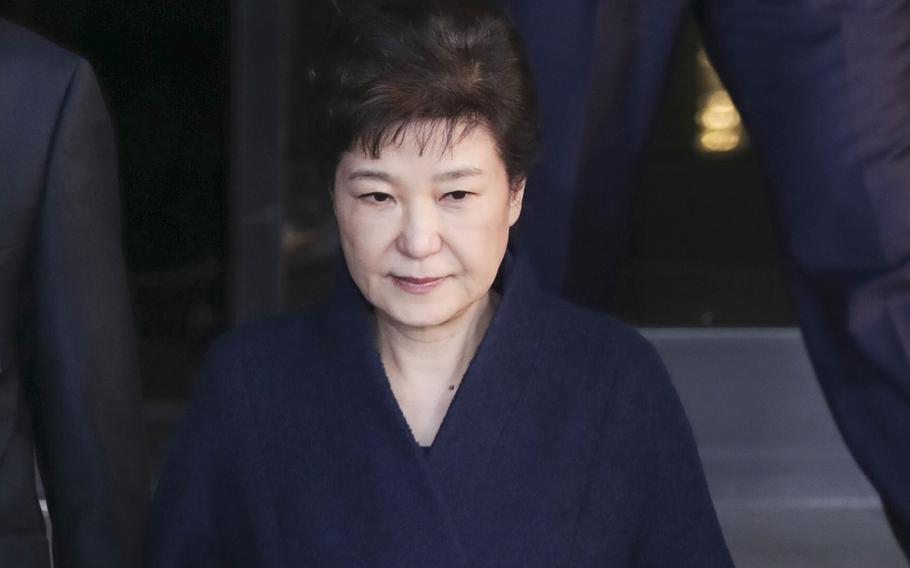 (Tribune News Service) — South Korea will pardon convicted former President Park Geun-hye, who was ousted from office after massive protests over a far-reaching influence-peddling scandal and sentenced to 22 years in prison for corruption and abuse of power, the government announced Friday.

President Moon Jae-in, who was elected after Park’s impeachment in 2017, said the pardon was being issued to “stop fighting buried in the past” and to shore up “national unity” in the face of challenges ahead. He said Park’s deteriorating health from nearly five years in prison was taken into consideration. She will be released Dec. 31.

Park, 69, has been an abiding icon for conservative opposition protesters who contend that her ouster and imprisonment were politically motivated, despite her conviction being upheld by the nation’s highest court. She is the daughter of the late dictator Park Chung-hee, a controversial military strongman who ruled South Korea for nearly two decades.

She has been hospitalized since late last month, suffering from shoulder pain, spinal disk issues and mental health problems, according to her representatives. She has been behind bars for four years and nine months.

Park’s impeachment, which marked the first time a South Korean president was legally removed from office, came after months of large-scale peaceful protests in 2016 and 2017 in which more than a million citizens filled the streets holding candles and demanding her removal, at times in frigid temperatures.

The wide-ranging scandal revealed that Park and a close confidant received millions in bribes from some of the nation’s wealthiest conglomerates, including Samsung, in exchange for favorable government decisions. The “candlelight movement,” as the protests came to be known, marked a watershed moment for the country’s still-young democracy.

Samsung’s third-generation scion Lee Jae-yong was also convicted of bribery and other charges for payments steered to foundations controlled by Park’s confidant, Choi Soon-sil, in exchange for government decisions that would help smooth his succession as de facto head of the storied conglomerate.

Moon and his political allies had previously dismissed the possibility of a pardon, citing national sentiment and Park’s apparent lack of remorse. Despite issuing apologies while she was still in office, she has struck a defiant tone during her incarceration.

This month, a collection of her letters to supporters is scheduled to be published, including allegations that others had “unloaded their baggage onto me.”

“Falsehood may briefly block people’s eyes and cover their ears and deceive the world, but in time, truth will reveal itself,” she wrote, according to excerpts quoted in the local media.

An attorney for Park on Friday told reporters gathered at her hospital that she apologized for “causing the people worry,” and that she would focus on improving her health.

Park is one of 3,094 people being pardoned in time for the new year. Not on that list is Lee Myung-bak, who preceded Park as president, was convicted of bribery and embezzlement in a separate case and is serving a 17-year sentence.

Two other former presidents, Chun Doo-hwan and Roh Tae-woo, had previously been convicted and jailed, then later pardoned. Chun and Roh, military rulers who both died this year, were convicted in 1995 of mutiny and corruption but were pardoned in 1997, serving just two years in prison.

Park’s pardon is likely to reverberate in South Korean politics ahead of March’s presidential election.

Opposition candidate Yoon Seok-youl, a former prosecutor who played a major role in investigating Park’s corruption case, previously said he would pursue pardons for both Park and Lee if he were elected. Lee Jae-myung, a former provincial governor running for Moon’s ruling party, has said he was against a pardon.

A November poll by Gallup Korea found the country split over the idea, with 48% opposing a pardon and 44% supporting it. The survey showed a clear generational divide, with people under 40 overwhelmingly against Park’s release and their elders, many of whom tend to favorably remember the economic development under Park’s father, saying she should be pardoned.

Moon, in his campaign to succeed Park, had pledged to limit pardons for those convicted of corruption and embezzlement, in an effort to set himself apart from previous presidents. Many before him had issued pardons for politicians, elected officials or the heads of powerful conglomerates known as chaebol, at times claiming it was for the sake of the country’s economy.

The pardons announced Friday also included one for former Prime Minister Han Myeong-sook, a previous political ally of Moon’s, who served a two-year term for receipt of illicit campaign funds until her release in 2017.