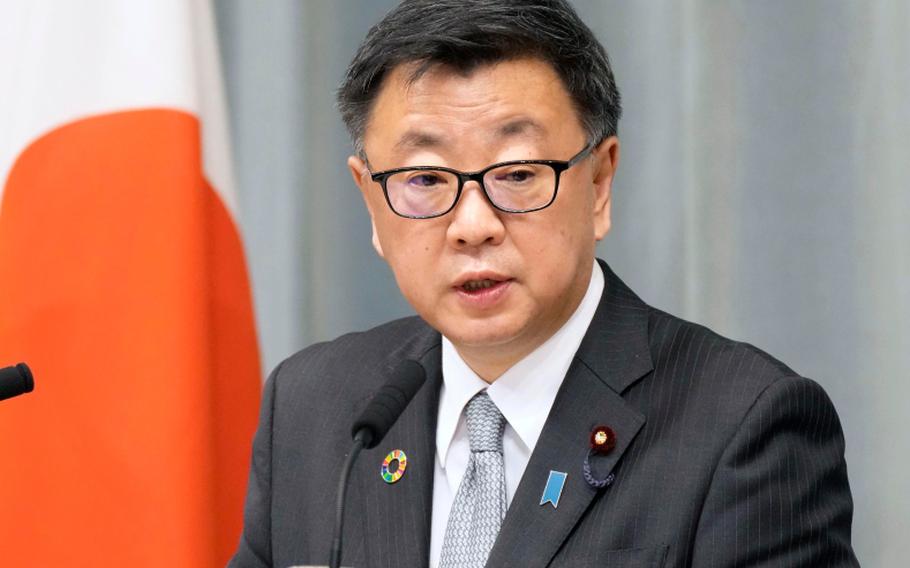 Japan’s Chief Cabinet Secretary Hirokazu Matsuno speaks on Friday, Dec. 24, 2021, in Tokyo, where he announced that Japan won’t send a delegation of ministers to represent the government at the Beijing Games. (Sadayuki Goto/Kyodo News)

Japanese athletes will participate in the Games as planned.

It is thought that the government took into consideration the lack of progress regarding human rights issues in the Xinjiang Uygur Autonomous Region and Hong Kong.

Prime Minister Fumio Kishida has established a new post of special adviser to the prime minister on international human rights issues, emphasizing his stance on the matter.

The United States and other countries have announced diplomatic boycotts of the Beijing Games, citing China's human rights record.

Amid such moves, Kishida likely concluded that it would have been difficult to send a Cabinet member or other state officials to Beijing.

Japan Sports Agency Commissioner Koji Murofushi will not attend either.

Some in the government and the ruling parties wanted the prime minister to announce the government's decision but a senior Foreign Ministry official in Tokyo said it is "rare for a head of state to make such an announcement."

The head of the General Administration of Sport of China - a minister-level official - attended the Tokyo Games this summer.

As the Japanese government wanted to avoid riling Beijing unnecessarily, Matsuno did not use the term "diplomatic boycott" at Friday's press conference.

Regarding the issue of whether to send a government delegation to Beijing, Kishida had said, "We will make our own decision at an appropriate time in light of national interests and by taking various factors into account."